Truffaut and his women: Anne, Muriel and Catherine 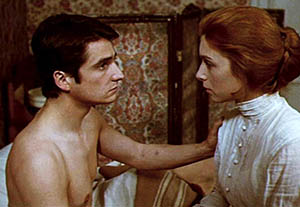 A couple of weeks ago in the Guardian Review, Germaine Greer wrote an interesting analysis of Truffaut’s Jules et Jim (France 1962), based on the novel by Henri-Pierre Roché. A week later Xan Brooks gave the re-released film a 5 star rating and several other commentators have reminisced and reflected on Truffaut’s work (not least since Cannes 2008 inevitably prompted memories of Cannes 1968 when Truffaut was one of those leading a walkout by young French directors).

Jules et Jim is arguably now the most revered Truffaut film and it only seems to be a few years since it was last re-released. I remember introducing the film in a cinema and feeling slightly uncomfortable because although I was a Truffaut fan in the early 1970s, I had for some time felt that I couldn’t cope with his portrayals of women. I seemed to have grown up, but Truffaut somehow remained within a kind of adolescent fantasy. Greer’s essay is well worth reading and she has some interesting things to say about the formal and emotional appeal of the film and the strange representations of sexuality and sexual behaviour shown in the ménage à trois between the three central characters, Jules, Jim and Catherine (Jeanne Moreau). Greer argues that, bowled over by Catherine in 1962, she now sees all the problems associated with both that character and all the other representations of women in the film. She also worries what a 2008 audience might make of the film 46 years on.

I don’t always find myself agreeing with Greer, but on this we are as one. By chance, however, I picked up another Truffaut in a DVD bargain bin last month. This was Les deux anglaises et le continent (Anne and Muriel) (France 1971) and it’s Truffaut’s adaptation of the other novel by Henri-Pierre Roché. As with Jules et Jim, Roché wrote this late in life, referring back to his days as a journalist and art collector in the early 20th century. (The novel was published in 1956 when he was 76.) This time, the ménage à trois involves two (Welsh not English!) sisters and a man who collects artworks in Paris (he is given the name ‘le continent’ by the two girls). The man meets Anne in Paris, then visits Wales where Anne helps to shift his interest towards Muriel. The two fall in love, but Muriel’s widowed mother suggests that they should have a trial separation to see if they are really in love. From this point, things start to go wrong.

In style terms, Les deux anglaises is a very different film to Jules et Jim. The freewheeling Black and White ‘Scope photography by Raoul Coutard of the former is replaced by painterly colour images composed by Néstor Almendros in 1.66:1. These are very beautiful, but not in the chocolate box style of a Merchant Ivory. The landscape (actually Normandy) is well handled. It’s an altogether quieter film with voiceover narration and slow fades between scenes instead of the lively montage and decoupage of Jules et Jim. The rather serious tone is also emphasised by the performance of Jean-Pierre Léaud as the Frenchman. Léaud is Truffaut’s alter ego in the Antoine Doinel films and also the earnest young man in some of Godard’s more political films. I confess I now find him rather irritating, though in 1971 I identified with him quite closely. In this film his acting style is contrasted with that of the two English actors, Kika Markham and Stacy Tendeter, both of whom are terrific. The character, Claude, is of course Roché and he is Truffaut.

The film is introduced on the DVD by Serge Toubiana (there is also a commentary by the screenwriter Jean Gruault). Toubiana helpfully explains that the film was a flop on its release and that Truffaut was wounded by its failure. Toubiana suggests that audiences post 1968 were ready for sexual ‘permissiveness’ and that they were not interested in a film in which three characters fell in love, but instead of consummating passion, wrote about it at length in diaries and letters (which give the film its narrative flavour through voiceovers). Truffaut is reported to have said that Les deux anglaises is not so much a film about physical love as a ‘physical film about love’. (And indeed, in some ways the film is more realistic and ‘physical’ in its discussion of sex – but not in ways that might be expected in this kind of story.)

I’m not a big fan of the biographical/auteurist approach to films, but it does seem relevant that Truffaut embarked on this film after his break-up with Catherine Deneuve. He had been close to both Deneuve and her sister, Francoise Dorleac who was tragically killed in a car crash. Deneuve went on to have a child with Marcello Mastroianni. These two events are to a certain extent echoed in Les deux anglaises.

The film is essentially a tragedy in which love makes the three characters ill because of the moral quandaries and self-questioning it invokes. For me, this film has survived and now seems a timeless tale, whereas the ‘celebration’ of love in Jules et Jim seems to be questioned by the representation of Catherine.

Here are some slightly different views of the film.