I wasn’t sure what to expect from Che – Part 1 (aka The Argentine). I went overboard a few years ago over Soderbergh at the time of Erin Brockovich and Out of Sight. Then I decided he’d blown it and ignored most of the stuff after Oceans 11 which seemed so ordinary. But there was no way I wanted to miss this. The story of how 82 men aboard the Granma landed in Cuba and fashioned first a military victory and then a revolution is one of the great stories of the 20th century.

What Soderbergh and Benicio del Toro (who seems to have been the instigator of the project) have achieved is quite remarkable. It hasn’t pleased everyone (with critics from both left and right) and many audiences seemed to have been confused by both the overall approach and the narrative structure which moves between three time periods in this first part of which was originally a 4 hour plus single film. I’ll have to wait until I’ve seen Part Two next month before I can comment on the whole thing, but I was certainly hooked by this half.

The first sequence in chronological terms offers the initial meeting between Che and Fidel Castro in Mexico City in 1955. There is a brief mention of the trip in the Granma, but most of the film covers the period from 1957 until January 1959 in which the 26 July Movement headed by Castro gradually moved towards Havana and the overthrow of Batista. Cut into this is black and white footage of a ‘flashforward’ to 1964 when Che visited New York to speak at the UN. (There is also a brief flashback to Mexico City.)

The confusion arises for two reasons. First, Soderbergh doesn’t give all the information necessary to understand everything that we see (though there is a lot of material that is presented) and second, that he doesn’t offer the familiar tropes of the biopic – or the war combat action picture. He deliberately keeps his distance from Che, keeping him framed much of the time in wide shots and as part of the group. We don’t learn about his back story or about his inner thoughts – we have to come to understand him through what he says and does in his role as comandante. Personally, this didn’t bother me. I knew some of the details of the story anyway, having spent an interesting afternoon in the Museum of the Revolution in Havana. Perhaps more importantly I really like the style, which for me was Rossellini and possibly a little of Pontecorvo. Thinking about it now a few hours later, the Roberto Rossellini film that might be in the back of my mind is Viva l’Italia! (Italy/France 1961). I have seen it just the once thirty years ago but it made an impression. Like Che, it is essentially about a revolutionary leader, Garibaldi, leading his men to victory and liberation. The Rossellini method is about representing history using realist aesthetics. It’s interesting too that Rossellini developed his own camera focusing device to enable him to shoot more easily in long takes. Soderbergh on Che is supposed to have used the RED digital camera, shooting the film himself under his pseudonym ‘Peter Andrews’. (The film’s credits also mention an Aaton Super 16 camera, so I’m not absolutely sure which technology was used for which scenes.) The ‘problem’ for audiences used to mainly mainstream cinema is that this approach doesn’t favour a close identification with individual characters. Without this emotional attachment and faced with two hours plus of subtitled (but very clearly articulated) Spanish, it might be a struggle. Having said that, Benicio del Toro is in nearly every scene – but we rarely see him with his guard down. Mostly, he is teaching his compadres (and us) what we need to do to succeed in the campaign. Which is fine by me.

Perhaps I’m too easily pleased. In Sight & Sound, January 2009, Michael Chanan, the leading British writer on Cuban Cinema, tears into the film in a short piece titled ‘Rebel Without a Point’, referring to a “lacklustre script”, “odd omissions and a flat pace”. He suggests that the script “has as much depth as a Cuban primary school textbook and is rather less exciting” and wonders why Soderbergh bothered in the first place. It’s tempting to turn the tables on Chanan and ask what he really wants to do in his article. He goes on to say that the film makes no historical gaffes, that there are incidental pleasures and that the translation of Peter Buchman’s script into demotic Cuban speech is pretty good. The problem is surely that for Cuban film and history experts like Michael Chanan, there is no way that Soderbergh could have adequately ‘covered’ the military campaign and the political dealings necessary to bring the anti-Batista forces together in five hours, never mind two. I’ll grant that the film is not as ‘exciting’ as it could be and that it could certainly take more passion. But, I quite like its fairly low key, distanced stance. I really enjoyed all the talk of the need for education and discipline. From what I’ve seen of Cuban education materials, they are pretty good, so if audiences get only a primary school introduction to the road revolution, I think that will be an achievement. And as Chanan concludes, the film might just help to prod a new US President into thinking about the “irrational economic blockade” of Cuba that has lasted for almost 50 years.

I’ll certainly go and see Part Two, although I’m not really looking forward to Che’s demise. Like many others, I’d like Part Two to focus on Che’s problems in Cuba post the revolution and I’d be intrigued to see something about the Congo expedition. More please!

If you want to see how the film’s characters are represented in comparison with the official photographs of the time, you can browse a large collection of images on the website of Ediciones Aurelia (and buy postcards and posters). 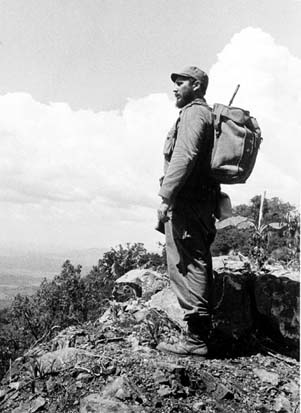 Fidel in the mountains, an Alberto Korda image from Ediciones Aurelia.

This entry was posted in American Independents and tagged Cuba. Bookmark the permalink.