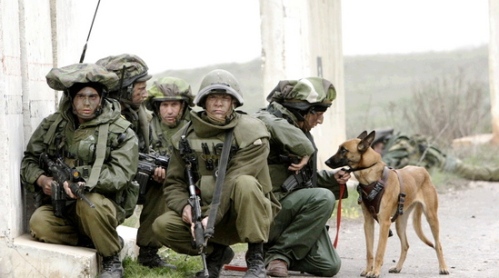 Beaufort is set at the time of the Israeli withdrawal from South Lebanon in 1999-2000 after 18 years of military occupation. The title refers to a hill-top observation post manned by a small group of IDF (‘Israeli Defence Forces’) soldiers and built in the ruins of a Crusader fort first established in the 12th Century and occupied by successive groups of soldiers ever since (including the PLO in the 1970s up to the Israeli attack in 1982). Writer-director Joseph Cedar is a Jewish- American who grew up in a Zionist family and lived in a settlement in Occupied Palestine for two years whilst writing one of his two earlier Israeli films, Time of Favour (2000) (as he explains in an interview in Cineaste Vol XXXIII No 2 in 2008). All three of Cedar’s films (Campfire (2004) about Zionist settlers is the third) have been hits in Israel and Beaufort was the official Israeli Oscar contender in 2008, receiving a Nomination as Best Foreign Language Film – it won a Silver Bear at Berlin.

In many ways the film is a classic Hollywood B movie ‘combat picture’ about the grunts who find themselves effectively abandoned by the their military chiefs. Robert Aldrich and Sam Fuller come to mind. Cedar himself says he was inspired by Lewis Milestone’s Pork Chop Hill (1959), Malick’s Thin Red Line, Petersen’s Das Boot and Kubrick’s Paths of Glory. I have to say that visually and in terms of the fort’s defenders’ behaviour, I was strongly reminded of several science fiction films. The poster below shows a shot that occurs several times and uses the strange mise en scène created by the prefabricated living quarters and tunnels connecting the various parts of the base. Given the cumbersome kit the soldiers carry and their helmet camouflage, they at times resemble astronauts on a space station under attack from an unseen enemy. They observe the world much of the time through video cameras and the only evidence of the enemy is the barrage of incoming missiles. 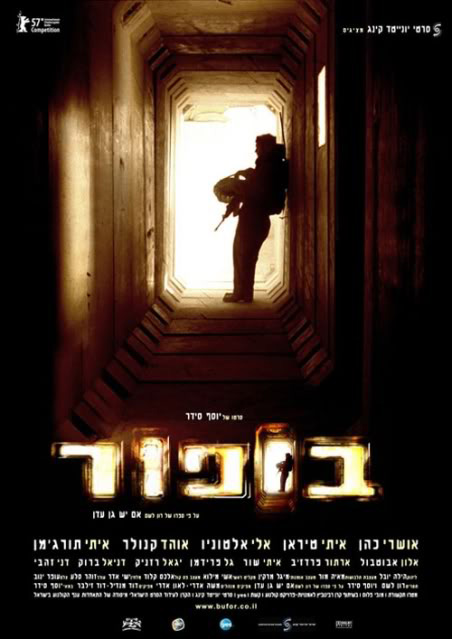 One of the striking aspects of the IDF is the age of the soldiers. The commander of the fort is a Lieutenant who is only 22. Although there are a couple of older men, most of the fort defenders seem to be late teens, early 20s. I understand that the IDF mainly comprises conscripts who have three years of service starting at age 18 (for men – women only have to do two years and this won’t usually be front-line service) followed by annual possible reserve call-ups up to age 49.

I confess that when I first watched the film, I thought it was going to be an anti-war statement, but on reflection I’m starting to find it a more disturbing piece – especially after I read a critical commentary that I found very convincing (an excellent resource on the film from a US Israeli Studies scholar). The main conflict in the film is not so much offered by the Hezbollah missiles which rain down on the Israelis with ever-increasing accuracy, but the mismatch between the experience of the ‘grunts’ in the bunkers of Beaufort and the political machinations of the army chiefs and politicians. The focus for the conflict is the young base commander Liraz. He is himself on the edge of some kind of breakdown. He isn’t the greatest military commander and at one point he has a complete funk when he fails to drag a comrade out of danger. But he feels for his men and he generally tries to do what is best for them. At the climactic point in the film he rails against the top brass who order that the troops must stay in the firing line (with extra protection) when everyone knows that a few days later they will retreat anyway. Liraz seems like a riposte to the heroic young commander from earlier Israeli war films and the whole group on the base are portrayed as disintegrating as a disciplined unit.

The film is very much associated with a siege mentality and I was intrigued to read an essay by  Nitzan Ben-Shaul in 24 Frames: The cinema of North Africa and the Middle East on an earlier Israeli war film, Kippur (2000) written and directed by Amos Gitai. Ben-Shaul describes it as a ‘siege film’ and this seems to fit several Israeli films, including Beaufort. The argument is that the siege mentality is built into the Israeli psyche. It comes from religious doctrine, from the history of Zionism and from the recent history of the conflict with the Palestinians. The sense of siege becomes acute in films after 1980 and Ben Shaul argues:

“War is posited as the sole origin of a society that is morally, emotionally, aesthetically and mentally corrupt. Society is represented as anxious and suspicious, its members being malicious and violent, or naive and therefore lost, confused and in despair. This confusion, anxiety and despair are supported by disjointed story and plot lines, articulated within a closed narrative space.” (op cit p.214)

I’m not sure all of that is applicable to Beaufort, but much of it is. The other important point to note is that like the other recent Israeli war film released in the UK in 2008, Waltz With Bashir, Beaufort never shows the enemy and never properly explains the Israeli occupation of Lebanon. The suffering brought about by occupation is thus represented by the effects on Israeli soldiers – not the Lebanese and Palestinians.

Beaufort needs to be analysed and mulled over for the reasons outlined above. Having said that, it is still worth watching for its representation of the futility of most military actions.

This entry was posted in Film Reviews and tagged Israeli Cinema, war movie. Bookmark the permalink.