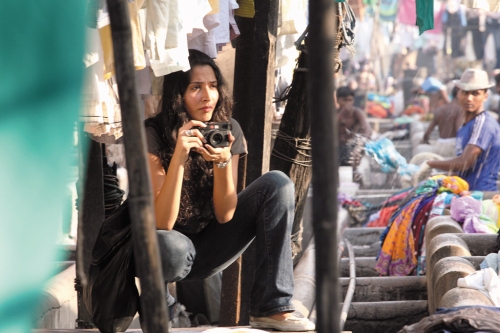 Screen International‘s reviewer described Dhobi Ghat as an arthouse film after seeing it at the Toronto Festival. Mike Goodridge suggested that the film could play in specialised cinemas internationally, but he (correctly) forecast that because the film stars Aamir Khan it would be released on what he called “the Indian circuit” (i.e the 17 different territories that take Bollywood releases) to avoid piracy. And indeed that has been the case with a successful release in UK multiplexes. (I noticed too that the film was playing in Kuala Lumpur on the circuit.) This raises all kinds of questions about production/distribution of what Goodridge refers to as the ‘new independent Indian Cinema’.

Dhobi Ghat is an Aamir Khan Production, written and directed by Kiran Rao – Khan’s partner. Since Khan is the Number 1 star in Bollywood at the moment, we should perhaps question what ‘independent’ means in this context. Although the film sometimes looks as if it was shot ‘on the run’ (Wikipedia refers to ‘guerilla shooting’), it was in fact a major production as evidenced by the lists of VFX and extensive crew roles. Currently there are two different overall budget figures across the web. The film cost either 5 crores or 11 crores (i.e. around £500,000 or £1.4 million). I suspect the latter figure includes a major marketing budget. Even £500,000 would get you quite a long way on an independent Indian shoot – especially if Khan himself works without a fee. 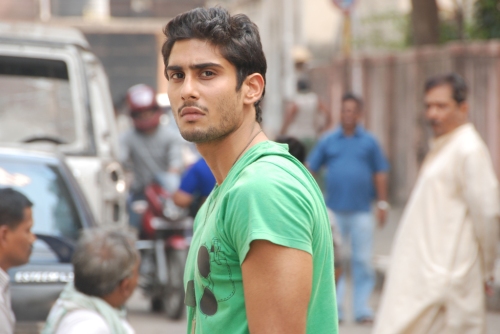 Prateik as Munnah the laundryman who wants to become a film star.

The idea behind the film derives from the interconnections between four very different characters in Mumbai (the alternative title is Mumbai Diaries). Arun (Aamir Khan) is an artist – a loner who grudgingly attends his own exhibition opening. Here he meets Shai, an American investment banker whose father still owns property in Mumbai. She is on a ‘sabbatical’, supposedly researching SMEs (small and medium-sized enterprises) in South Asia, but seemingly more interested in pursuing her hobby of photography. Both of them use the same laundry service offered by a dhobi nicknamed Munnah – a young Muslim from Bihar. The fourth character only exists on videotapes that Arun finds in a drawer when he moves to a new apartment. Yasmin is an unhappy young woman trapped in a loveless marriage as a new arrival in Mumbai from Uttar Pradesh. She makes the videotapes to send to her brother back home. The tapes then provide stimulus for Arun who sets out on a new project.

I’m not sure what I make of this film. On the one hand, it is a beautifully-produced and engaging narrative (though not a conventional story for mainstream audiences). But it is also rather contrived and conventional with imagery that is almost too ‘composed’ in its presentation of Mumbai. (The photos that Shai takes are extremely well-composed and look like the belong in a gallery.) Omar offers an excellent analysis of how Mumbai is presented and he (and Shubhajit) clearly love the film. I certainly enjoyed watching it and I recognise that it’s nearly thirty years since I experienced Bombay (as it still was then), but although there were some streetscapes that I recognised, I did feel that mostly the film repeated images from other films. Partly, I blame the soundtrack by the critically-acclaimed Argentinian Gustavo Santaolalla. The use of music made me think of Satyajit Ray’s ‘composed’ films, but it tended to remove the sense of noisy bustle on the streets, calming everything down. Sorry, the music is beautiful, but I think I would have preferred either A. R. Rahman or the more direct sound of Salaam Bombay!. The critical reaction to the film has come up with the idea that ‘Mumbai’ itself is a fifth character and there is a general consensus that “only in Mumbai” could we find these kinds of stories. Certainly I think it’s true that Mumbai is the Indian equivalent of Los Angeles – attraqcting dreamers and those seeking their fortune (or just a living) from all over India. Rao herself has claimed that the script was based to some extent on her own experiences living in the city and the issues concerning class, caste and religion in many scenes are well handled.

The contrivance comes from the introduction of Yasmin’s tapes at the start of the film when we don’t know their provenance. The film starts with wobbly ‘amateur’ video footage shot on Mini-DV with Yasmin’s voiceover. I felt some uneasiness around me in the cinema until more conventional composed images shot on 35 and 16mm appeared. The tapes intrigue us partly through this introduction – whereas the rest of the narrative is presented in a linear fashion. In the last part of the film we are offered quite conventional narrative resolutions in terms of crime or romance dramas. The four characters are well-drawn but what happens to them seemed familiar to me in terms of Bombay stories. There is nothing wrong with that of course, only that the film sometimes promises to transcend a conventional Mumbai-set drama.

The casting sets Aamir Khan against three newcomers (at least as leads). Khan exudes starpower. He plays the mostly sullen loner and his muscle-toned figure and intense stares dominate several scenes. The two women (with Kriti Malhotra as Yasmin) are excellent but the revelation is the dhobi wallah, played by Prateik – who turns out to be the son of India’s greatest star of parallel cinema, Smita Patil. Prateik would never have known his mother who died when he was only a few weeks old. But mention of his mother raises the question of how this film fits in with the tradition of parallel cinema. Aamir Khan himself refers to the parallel tradition in interviews. I think that the film points in the right direction and its success (both commercially and critically) means that it may be easier to get other similar films made. Certainly Kiran Rao has real talent as does the first-time cinematographer, Tushar Kanti Ray and the trio of actors. Aamir Khan continues to be a fascinating filmmaker as actor/producer/director. The screening of Dhobi ghat was preceded by a teaser trailer for the next Aamir Khan Productions release in the Summer entitled Delhi Belly. The short clip looked like an hommage to Danny Boyle and Trainspotting!

Returning to the discussion of ‘specialised film’ status, I doubt whether many people in the audience at Cineworld were from the usual UK specialised audience. If someone like Clare Binns at City Screen, or perhaps the ICO, were to put the film into UK specialised cinemas, I’m confident that they would find an audience.

Here is an HD trailer that offers a glimpse of the visual beauty of Dhobi ghat:

In this interesting clip, Kiran Rao and Aamir Khan demonstrate how they set up some of the street scenes in one of the famous thoroughfares in ‘Old Bombay’.

This entry was posted in Film Reviews, Films by women, Indian Cinema and tagged Indian Parallel Cinema. Bookmark the permalink.