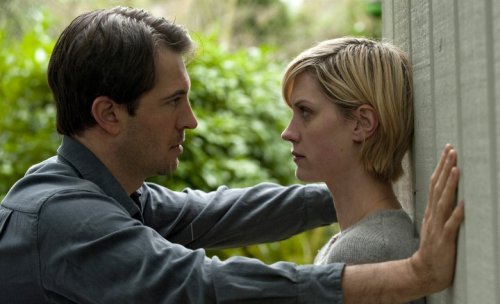 My first full day at this year’s Bradford International Film Festival was weirdly stuffed with families and photographs in the way that festival programmes seem to generate their own themes. I’m starting with the last film I saw on the day which is freshest in my memory.

I guess Anglophone Canadian Cinema suffers even more from low visibility than does independent British Cinema. Francophone Canadian Cinema gets the occasional Oscar nod and a chance to develop various auteurist talents but Canadian directors otherwise need to head for New York or LA to get recognition. It’s silly of course because there are many worthwhile Canadian films around. A Night for Dying Tigers has a stellar cast of Canadian thesps plus Jennifer Beals adding some genuine Hollywood stardust. The film was made in Vancouver, home to various US TV series and the Canadian actors may be familiar faces for TV watchers.

Terry Miles is clearly a talented young man. He wrote, directed and produced this film as well as sharing photography and editing. A Night for Dying Tigers is glossy, slick, finely acted and well-directed. The editing is also interesting – though the digital print did behave rather oddly in a couple of places and I’m not totally sure about what was intentional.

The narrative is familiar – a dysfunctional family (and related hangers-on) gathers for an emotional final dinner before Jack is to spend 5 years in prison. The film’s title refers to a childhood incident involving the youngest of the three brothers, Patrick, and his (adopted) sister Karen with whom he has an ongoing incestuous relationship (or as the others discuss, is this really incest or not?). The third brother, Russell, is a professor and novelist who is currently shacked up with a 19 year-old graduate student prodigy. Jack has both a wife, Melanie (Jennifer Beals) and a younger mistress Jules. The reason for his prison sentence is only revealed later – and it involves one of the others. Patrick is a director of horror films and Melanie is a photographer. The Russell parents are dead (their deaths are also explained later) and the ‘celebration’ takes place in their house designed by the men’s architect father. Their mother was an art historian and photographer. (Russell’s student is also an art history major.)

One of the few online reviews comments on the direct references made to the similarly dysfunctional family of J. D. Salinger. I confess that I missed (or rather didn’t hear) these comments but they fit in. There is very smart dialogue moving from warm sentiment to biting waspish humour and very black comedy in a flash. As you might expect from the genre, new revelations about the group of characters crop up at regular intervals. These people should be insufferable but actually they are very attractive and I was easily swept along by the unfolding drama. At first I did have to work hard to understand what was going on, but this work paid off when all the characters came together.

I really don’t understand why Canadian films are so hard to distribute. This seemed to me much more interesting and entertaining than most Hollywood fare yet this was the European première of the film and deserved a much bigger audience. Bradford is to be commended for playing Canadian films regularly but they need to be seen elsewhere in Europe. Come on distributors!

This entry was posted in Canadian Cinema, Festivals and Conferences, Melodrama and tagged Bradford International Film Festival. Bookmark the permalink.