Psalm 21 is a Swedish horror film released on DVD by Revolver and via LOVEFiLM and iTunes on May 30 in the UK. I presume that the distributor hopes that the film will attract fans of Let the Right One In. I wish that Revolver had also organised a cinema release as this is a handsomely mounted CinemaScope movie with strong effects that I think would look good on a big screen.

In some ways it is a conventional horror film displaying many of the familiar tropes – but instead of ending with the vanquishing of evil, its story carries on and offers a different message, seemingly about the Swedish church.

The central character Henrik is a priest and we first meet him in his own church delivering a sermon that appears to entertain his audience of comfortable families from the Stockholm suburbs. But this is only after a prologue featuring a small boy who seems to terrify his mother just by looking at her. We are reminded of this when the clergyman is visited by a parishioner desperate for help who says that she can see the souls of the dead, one of whom stands behind the priest. The flashback to Henrik’s childhood will be re-visited later. He fobs off his parishioner but when he returns home we are aware that all is not well in his household. His own small son ignores him and is soon being taken away by his estranged wife. Then his housekeeper (who may be much closer to him) answers the phone and tells him that his father has died. Against her advice, he decides to drive that night to the small village where his father had been the local priest. 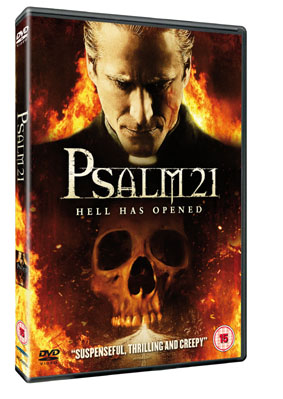 ‘Any fule kno’ that in a horror film you don’t go out on your own in the middle of the night and of course he begins to see apparitions and is then forced to seek refuge in a dark house in the woods when his car refuses to go any further. From here on Henrik will uncover the story behind why his father died, what connection he had to the family in the dark house and, eventually, about his own childhood (memories of which he might have suppressed). I’m not sure if Psalm 21 is a ‘scary movie’. It’s more of a psychological horror than a ‘splatter fest’. The effects work (by a company that works on the Harry Potter films) is there primarily to create interesting ghost figures who appear at various points, mostly in Henrik’s dreams. All of the ghosts are known to Henrik or are associated with his father. The ‘horror climax’ features an admonition by his father about Henrik’s behaviour as a child. The father, Gabriel, is played extremely well by Per Ragnar, the older man who acts as a servant to Eli in Let the Right One In. This is a powerful scene.

The film is nicely shot with a muted colour palette and compositions that are reminiscent of both Let the Right One In and the J-horror cycle (and the US remakes) in which ghosts often materialise behind characters. Writer-director Fredrik Hiller is an established Swedish actor (he has a small role in the film) who also appeared in the Hollywood film Beowulf. Psalm 21 has taken some time to complete – it was in production at the same time as Let the Right One In and first emerged at a festival in 2009. IMdB suggests that it was released in Sweden in November 2010 but it doesn’t seem to have made the Swedish Top 20. Perhaps this means only a limited release before DVD? Hiller put his Hollywood earnings into the production and he’s now working on a Swedish zombie movie.

Here is an international trailer that gives a pretty good impression of the film’s style and tone:

As the trailer suggests, Biblical texts are as important in the film as the title implies. ‘Psalm 21’ is short and has two parts. The first is a thanksgiving to God for supporting King David. The second part celebrates God’s power and exhorts him to smite his enemies. This psalm has been interpreted and re-interpreted many times. The crux of the film’s narrative is that Henrik reads it primarily via the first part and sees it as validating a generous God, but Gabriel focuses on the second part and seems obsessed with the ‘smiting’ element. The film also suggests that in the 1970s the Swedish Church (Lutheran but not that far away from Anglicanism if I understand Wikipedia!) renounced traditional views on hell and damnation. Gabriel is presented as diehard supporter of the old view and it is this that he foists upon Henrik in response to their family issues. I won’t give the film’s ending away, but we do learn something about Henrik’s vocation and whether or not his views change after his ordeal.

Psalm 21 is an intelligent psychological horror film which will be scary for some and unsettling for all. I enjoyed watching it.

This entry was posted in Horror, Nordic Cinema, Swedish Cinema and tagged religion. Bookmark the permalink.