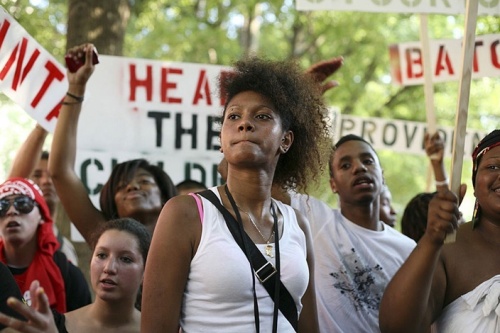 My festival got off to a flying start with this wonderful documentary. We Are Poets won the Young Jury Prize at Sheffield Docfest last June. I missed the chance to see it there and at two subsequent screenings in Leeds where it is a local production with enormous local support. I’m so glad that I made it this time. It’s showing again on Wednesday 25 April and goes on limited release via Dogwoof on June 29th. Please don’t miss it – you’ll be sorry if you do.

The poets in question are six teenagers from Leeds who are all members of Leeds Young Authors, a community-based project in Chapeltown, the most culturally vibrant part of the city, an area rich in ‘cultural diversity’ if not in material wealth. The project attracts young people to an exploration of the spoken word, fuelled to a large extent by the rich history of performance poetry in the African-Caribbean and other communities in the UK. Every year, LYA stages a ‘poetry slam’ competition and the winner automatically becomes a member of the team which applies to attend the ‘Brave New Voices’ poetry slam in the US, an annual event with over 400 performers from across North America. We Are Poets is a record of the build-up and the performances at the 2008 contest in Washington DC. The first half of the film deals with the selection of the six person team and the rehearsals and preparation. The second half covers the contest with a brief coda about the outcomes. 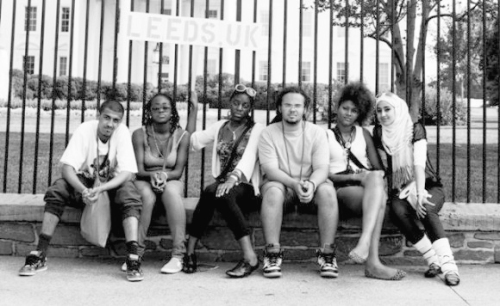 This is a film in which the sheer vitality, courage, intelligence and performance skills of the sextet tend to make you forget that this is a carefully constructed film – 80 mins cut from nearly 300 hours of footage. In a way, of course that is a tribute to the two filmmakers, Alex Ramseyer-Bache (a Leeds lad) and Daniel Lucchesi who met at Leeds Metropolitan University (who would eventually help to produce the film). In the Q&A which followed the screening Alex briefly discussed their major artistic decision, which was to open with one of the best poems spoken quietly over an effects heavy montage of Leeds street scenes. As he explained, it’s difficult to know how to cut the poems since it isn’t possible to include all the poems in full – which would produce a kind of concert film rather than the drama that unfolds when the sextet take their commentary on life in Leeds and what they think of the world today into an American arena. Let’s just say that Alex and Daniel do a great job and we are engaged in that drama. (Watch the YouTube clip below to realise the full extent of their commitment.)

I don’t want to spoil the drama of the film, which I think is well handled. As we might suspect, our six Leeds young people have to deal with American incomprehension – “which part of London do you come from?” – and difficulties with the Leeds accent. And the UK poets have to learn how to perform in an American context in which there is a great deal of emphasis on ‘performance’ and the use of hip-hop techniques. By contrast the Leeds poets are literate, social realist and sometimes acutely political. The crunch comes when the group have to decide whether they are going to deliver a poem in which America is presented as the ‘bad boy’ who ‘rapes’ the Middle East. Their coach back in Leeds has advised that this might not go down too well. 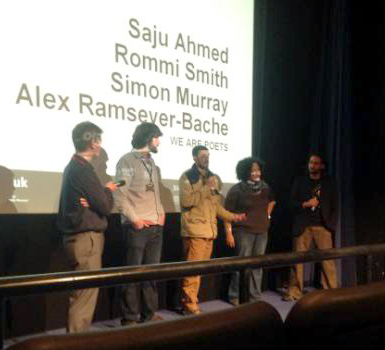 One of the young poets, Saju Ahmed at the Q&A. The director of the film is next left. LYA coach Rommi Smith and communications director Simon Murray to the right. Q&A introduced by festival co-director Tom Vincent to the left.

In the Dogwoof Press Pack for the film it suggests that audiences should be prepared to have stereotypes challenged. I guess that I can see what this means and one of the poets does tell us that his time in LYA has helped him move away from less desirable activities. But it’s an indictment of our society if we just assume that any success that comes out of the Chapeltowns in our cities is so unexpected as to ‘break stereotypes’. All I can say is that I wept through much of the film, simply through joy at seeing beautiful and talented young people in performances anybody would be proud of. I wish I had been able to stay for the ‘slam’ that followed the screening – but that’s festivals for you and my next screening  was nearly ready to start. But I did have time to catch a glimpse of the next generation of young poets who are already performing in their schools and who in a few years will no doubt be competing for a place on the team to go back to America.

Alex told us that he’d love to see the film used in schools and that Dogwoof hope to screen it in ‘pop-up cinemas’ as well as conventional cinemas. Download the Press Pack and get more information here – and if you know a TV company that would like to see it, point them towards Dogwoof’s sales team.

The directors’ Q&A after a BFI Southbank screening:

And if you are still wondering what a slam is like, here are three of the Leeds Young Authors performing at the 2009 Brave New Voices Event in Chicago:

This entry was posted in British Cinema, Documentary, Festivals and Conferences and tagged BIFF 2012, Leeds, poetry. Bookmark the permalink.