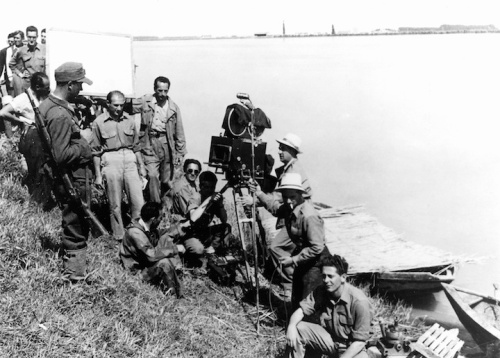 Roberto Rossellini (standing beneath the lighting reflector) on location in the Po valley for Paisà.

This is another earlier set of notes from 2006, now slightly updated during current work on Rossellini.

The second of Rossellini’s post-war films, Paisà (‘countryman’) is often quoted as the film that comes closest to the neo-realist ideal that Rossellini himself described some years later. If neo-realism was concerned with ‘finding’ stories in the world rather than imposing a fictional narrative on a location, then surely Paisà is that film. Equally, it meets the criterion of a film that refuses to be an ‘entertainment’ and speaks directly to the memory of the recent past. As the Taviani Brothers, filmmakers themselves who were inspired by Rossellini when they saw the film in 1946 as teenagers, have commented: “It presented what we had just experienced, but now we understood that experience through the presentation on the screen”.

Paisà tells the story of the Allied (here, very much the American) advance through Italy, from the invasion of Sicily in July 1943 to the fighting in the North in the winter of 1944, and their interaction in each episode with the partisans and ordinary Italians. Different characters appear in each of six separate episodes – there is no possibility of us identifying with an individual American hero who ‘makes it through’ (or indeed with a British squad like that in The Way Ahead, UK 1944) to a triumphant conclusion with a German defeat.

The story derives, in Rossellini’s terms, from the concrete reality of the situation and the approach he takes to the production supports this aim. The six episodes are intercut with actual newsreel footage, titles and voiceover in such a way that it is difficult to distinguish ‘real’ from staged footage. The Americans in the film are professional actors (but not ‘stars’), but many of the Italians are played by local people in the ‘real’ locations which Rossellini uses whenever possible. In the final episode, the incidents are based on events recounted by the ‘real’ partisans. The bleak ending of the film would not be possible in a Hollywood film, but for Rossellini it is not the end of the ‘story’. As Bondanella (1993) points out, for Rossellini the ‘reality’ is the triumph of the human spirit over adversity as understood in Christian philosophy. When the film begins, the Americans and the Italians are clearly unknown to each other, but the experiences they have through the course of the narrative prove their humanity and the development of their understanding. Pierre Sorlin suggests that:

Paisà might be considered as a history film – but it is a history not told from without by a historian trying to clarify the issue. It is the subjective, intuitive vision of an Italian who thanks the Allies for their support and condemns them for having taken so much time and let so many Italians be killed. Open City asserts the cohesion of the Roman population, Paisà wonders what has been left of Italy after two years of war. (Sorlin 1996: 101)

Sorlin’s comments prompt some consideration of the British characters in Episodes IV and VI, who seem (at least the military, not Harriet) to be ineffectual and arrogant. This may just be Rossellini recognising that the Americans were paying for the film. 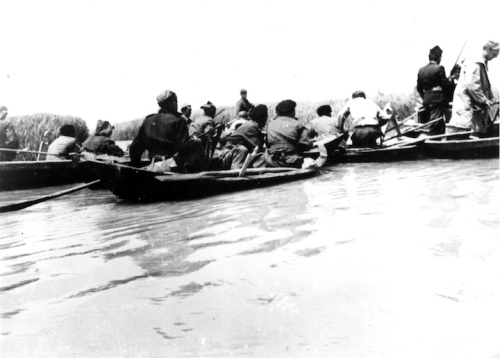 The partisans and the Allied agents on the Po delta.

Episode IV and Episode VI feature the use of Rossellini’s ‘long shot, long take’ approach to action. The argument in favour of the long take and the long shot is clearly demonstrated in the production still above. We are presented with a series of long takes in which the action unfolds, often in relatively long shot. The scenes are carefully orchestrated to flow almost seamlessly. Although there is clearly a ‘leader’ (the American officer), we are not invited to adopt his viewpoint. When mid-shots or medium close-ups are used, they pick out particular narrative incidents rather than develop individual characters. Most of all, the camera is used to create for us the viewpoint of the partisans who live in this unique environment. As André Bazin writes:

. . . the horizon is always at the same height. Maintaining the same proportions between water and sky in every shot brings out one of the basic characteristics of this landscape. It is the exact equivalent, under conditions exposed by the screen, of the inner feeling men experience who are living between the sky and the water and whose lives are at the mercy of an infinitesimal shift of angle in relation to the horizon (Bazin 1971:37) )

Robin Wood (1980) makes some important observations which place the analysis of style and content in Paisà in context. He reminds us that what distinguishes Rossellini is his refusal to make a ‘well-made film’ and that his placing of the camera is governed by a desire to reveal the actions of characters and their consequences. Comparing the final episode of Paisà with the famous Odessa steps sequence from Battleship Potemkin, he comes down on the side of Rossellini who, unlike Eisenstein is not producing a film from a position of having triumphed in the Revolution. Instead, Rossellini’s camera suggests: . . . “total instability, the sense of a world where nothing is certain except ultimate desolation, physical and emotional, a world of random and casual cruelty . . . “ (Wood 1980: 889) In other episodes, especially the one with the MP and the boy, Wood sees Rossellini as undermining our expectations of conventional stories with familiar ‘types’ and predictable outcomes, “leaving us in every case, not only without complacency, but without hope”.

Paisà was, not surprisingly, shunned by popular audiences in Italy at the time, but does it work now to bring home the horrors of war and the capacity for human suffering? We could argue that Paisà was the ultimate achievement of Rossellini’s neo-realist approach. Its episodic structure, long shot compositions and avoidance of star performances focuses absolutely on the concept of liberation won by partisans and soldiers en masse.

André Bazin (1971) ‘An Aesthetic of Reality’ in What is Cinema?, Vol. II (originally published in Esprit, January 1948), Berkeley, Cal: University of California Press