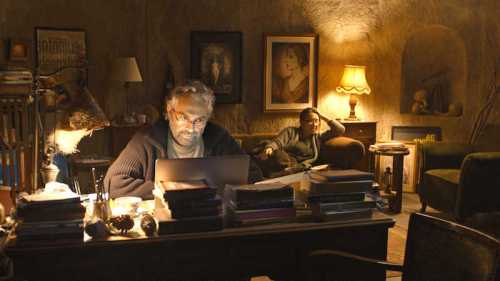 The warm interior of the hotel – Aydin (Haluk Bilginer) and his sister, Necla (Demet Akbağ)

Winter Sleep won the Palme d’Or at Cannes in May, confirming the status of writer-director Nuri Bilge Ceylan as a leading figure in global art cinema. Since 1998 he has been winning prizes at film festivals from Tokyo to Buenos Aires and all points in between. So much has been written about his latest film that I am wary of simply repeating the same observations. If you want to read a review and an interesting interview I recommend Jonathan Romney’s review and Geoff Andrew’s interview in Sight and Sound December 2014. Romney’s review is not untypical in finding the film disappointing while still recognising it as a notable intellectual achievement. In Sight and Sound January 2015, the Cannes valuations have been reversed and the ‘poll of critics’ has placed Winter Sleep at No 7 in the list of the year’s top films. Its Cannes rival Leviathan appears at 3. These lists are pointless really but they sometimes indicate shifts in taste. My thoughts on Leviathan are posted on The Case for Global Film.

Winter Sleep‘s narrative presents a central character called ‘Aydin’ (Turkish for ‘intellectual’ according to Ceylan in the Andrew interview). Once an important stage actor, he has retired/retreated back to the mountainous region of Cappadocia in Eastern Anatolia to run the hotel he has inherited. The Hotel Othello is carved out of the rocks like many of the dwellings in this important but isolated tourist region. As well as the hotel, he has also inherited land and tenants. He lives with his sister Necla, recently divorced, and Nihal his younger wife. He delegates the business aspects of the hotel and the tenancies to his agent and spends his time writing a column for the local paper and contemplating the history of Turkish theatre which he intends to write. But as the winter draws in and the snows come he finds himself in dispute with both his wife and his sister as well as one of his tenants.

The issues at stake here in the negative aspects of some of the reviews are the length of the film at 196 minutes and its ‘interiority’ – a narrative dealing with quite a small cast of major characters who spend much of the time in conversation (and confrontation) in darkened rooms. Since Ceylan was a photographer before he became a filmmaker and since he has gained a reputation for his presentation of Turkish landscapes, there is a frustration felt by some critics with his change of approach.

In the Andrew interview Ceylan discusses the length of the film and acknowledges that nobody likes long films but that he felt the need to be free to tell a story like a novelist. (He actually wrote the script jointly with his wife Ebru as has been his practice for several years.) He then observes that films like this have a long after-life on DVD allowing ‘readers’ to break off and re-engage with the narrative as they please – just like reading a novel. This strikes me as obviously true but also rather a strange viewpoint for a filmmaker of Ceylan’s unique vision. It occurs to me that an intermission would have been an excellent decision for the theatrical release (Seven Samurai had one for its 207 minute version and mainstream Indian cinema has made it an industry convention). I don’t like watching DVDs but I have to admit that it was a slog at times in the cinema and I struggled to concentrate in some of the long dialogue scenes (Romney suggests that one such scene lasts 30 minutes).

The general agreement seems to be that the film owes its narrative style/tone to Chekhov and Ceylan has spoken about his love of Chekhov in relation to earlier films. Here he makes it explicit and tells us that three Chekhov short stories were the inspiration for the script. In the end credits he also namechecks Chekhov alongside Dostoyevsky, Shakespeare and Voltaire. I’m not sure what to do with these references. I have some knowledge of all four, but not enough to usefully comment on how they influence Ceylan’s narrative. For me, the most useful ‘way in’ is to think about similar geographical/social/cultural locations. This, of course, includes Russia over the last 150 years plus perhaps Spain and definitely India. In fact the tourist hotel made me think of specific hotels which I visited in Andalusia and in West Bengal – hotels where it is easy to imagine an intellectual, aloof from the rural population, failing to achieve his personal aims, being criticised by family and friends and losing his sense of direction. 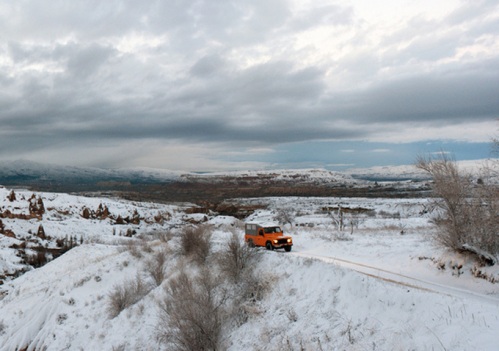 Aydin’s Landrover takes him across the steppes.

Several commentators have suggested that Aydin is indeed representative of a contemporary Turkish elite intellectual class. This view is coincidentally supported by the casting of Haluk Bilginer, a leading actor known in the UK for a stint on the UK TV soap EastEnders in the 1980s. Thus Aydin speaks very good British English in his dealings with an East Asian couple staying at the hotel (Ceylan says he didn’t know about the EastEnders role.) It’s also noticeable that Aydin decides to write a newspaper column about religion which becomes a target for his sister’s criticism. Intellectuals in Turkey have a difficult relationship with Islam in a country in which secularism and the idea of an Islamic state are in constant conflict. Even so, the scope of Winter Sleep is much wider than Turkey alone. Ceylan tells us that this is a universal story and certainly Aydin’s failings and his problems are very recognisable.

Most reviews assume that Aydin is an irredeemable character, a wealthy man who bullies his wife and doesn’t know how to behave towards his tenants – or indeed towards the whole local community. He is pompous, arrogant, proud etc. One or two do point out that Aydin is also a ‘civilised’ and charming man. Ceylan deliberately doesn’t give us very much in the way of back story for any of the principal characters. How long have Aydin and the two women been living at the hotel? When did he get his inheritance? How long is it since he had any acting work? Instead of being spoon-fed this background we are forced to glean what we can from the dialogues. These long scenes require accomplished actors used to delivering lines precisely and this has affected the casting. In earlier films Ceylan cast friends and relatives and even appeared himself as part of a couple with his wife Ebru in Iklimler (Climates, 2006) – perhaps the nearest to Winter Sleep in some aspects of subject matter, if not style). In these films he made more use of ‘street language’ and improvisation. In Winter Sleep the precise language is imperative in order to construct the narrative. The casting also makes an ironic comment on the relationship between film and television, since the two leading female actors are stars of Turkish TV. Aydin’s disparaging remarks about TV soaps in a sense reveal his own failure to get roles in TV drama which is now enormously popular in Turkey.

Nihal (Melisa Sözen) and Aydin in one of many ‘interior’ shots that use the space in the CinemaScope frame carefully to represent the relationships between characters.

Despite the fact that very little seems to happen, this is in fact a rich text. It isn’t the case that Aydin has no friends. He seems genuinely to care for a neighbour who is recently widowed (and who doesn’t see his daughter now living in London) and it with this man that he will get very drunk perhaps as a symbol of hitting rock bottom before he can start to put his life back together. And it isn’t the case that he is the only one not ‘in touch’ with the community. He bullies his wife and criticises her attempts to act as a fundraiser in the community and clearly he is in the wrong – but she also is pretty clueless about what she is doing. Ceylan isn’t didactic. He doesn’t tell us what to think. Instead he layers sub-plots that show Aydin’s interactions with local traditions and customs. One of these concerns the wild horses of the region which he (or a hired designer) have used as illustrations on the hotel website. When a guest asks if he has a horse he determines to acquire one. This decision develops into an interesting little story about tradition and modernity (and the sensibility of Western audiences). Some of these layered sub-plots or separate narrative ‘threads’ also involve philosophical dilemmas such as the action proposed by Aydin’s sister when she gives him feedback on his newspaper column. We realise that Aydin doesn’t really know whether the best strategy re his tenants is to leave everything to his agent or to intervene personally. The central plotline provides the scenario in which a ‘legal’ but uncaring action by debt-collectors brings Aydin face-to-face with an aggrieved tenant. Nuri and Ebru Ceylan construct the whole narrative so that it springs from a simple incident concerning the tenant’s young son.

Why is it ‘Winter Sleep’? The obvious allusion is to hibernation or to the ‘shutting down’ implied by the metaphor of the seasons for the ‘ages of man’. But rather than gradually hibernating, Aydin is more active than we might expect – worried that he isn’t doing the right thing or that more is expected of him. These kinds of references to seasons and climate often seem to be contradictory. Stories set in boiling summers when you might expect torpor to set in sometimes produce violent action brought on by impatience in the heat. Perhaps the key here is Aydin’s resolve at the end of the narrative to take a cold hard look at himself and change his behaviour – but typically Ceylan leaves open the possibility that Aydin might talk to his wife Nihal rather than just ‘get on’ with his own affairs.

Nuri Bilge Ceylan is the subject of a case study in The Global Film Book, focusing on his film Uzak (Distant 2002). The case study appears in Chapter 6, Middle East Without Borders. Elsewhere on this blog and The Case for Global Film, there are short postings on Iklimler (see above) and Once Upon a Time in Anatolia.