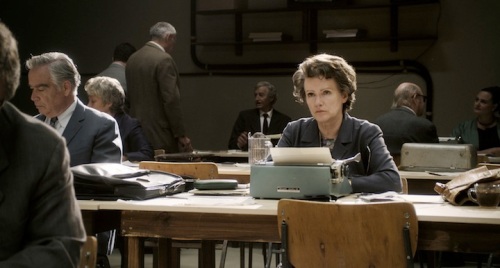 I fear that I don’t have time to do this marvellous film justice, but I’ll do what I can. At the beginning of the film I found it a little difficult to engage with and I’ve seen criticism of the direction and performances. However, whatever the problem was, I overcame it quite quickly and became completely absorbed. It was only afterwards that I realised what a controversial film it has become. Although there have been the occasional gainsayers, most of the reviews have been very good and Barbara Sukowa gives one of the performances of the year.

Background (There are some spoilers here, but the film is largely based on historical record)

Hannah Arendt (1906-1975) was a brilliant philosophy student in Germany in the 1920s and her PhD was supervised by Martin Heidegger. He eventually joined the Nazis but she was from a secular Jewish family and left Germany for France in 1933. In 1941 she fled France as well when the ’round-up’ of Jews began and landed in the US, eventually establishing herself as the first female university lecturer at Princeton in 1959. In the immediate postwar period she helped Zionist organisations to take Holocaust survivors to Palestine.

The film begins in 1960 when Israeli agents from Mossad captured Adolf Eichmann in Argentina and smuggled him to Jerusalem where a show trial was organised. Eichmann was one of the principal administrators of the transport of Jews to the gas chambers and the trial was an international event. Hannah was commissioned to write about the trial for the New Yorker magazine. Even before the trial her friends and colleagues were divided about whether and how she should cover it. By this time, Arendt described herself as a ‘political theorist’ – certainly she wasn’t a journalist and the New Yorker had to wait for the long articles that were published first in the magazine and then in book form as Eichmann in Jerusalem: A Report on the Banality of Evil in 1963. Arendt’s arguments in her report proved highly controversial for three reasons. Firstly she criticised the whole basis of the trial, since it was an attempt to put an ideology on trial, but only a man was in the dock. Second, she descred Eichmann as a man who had ceased to behave like a thinking person – in his statements to the court he didn’t display anti-semitism as such and he claimed to be an efficient bureacrat. From this observation Arendt developed her ideas about the ‘banality of evil’. Third, she suggested that some Jewish leaders had, through their behaviour in responding to the Nazis in an orderly manner, indirectly contributed to the extent of the deaths in the Holocaust.

The film is not a biopic as such. It focuses mainly on the events surrounding the arrest of Eichmann, the trial and its aftermath from 1960 to 1964. There are also two flashbacks to Hannah as a philosophy student (played by Freiderike Becht) and then to a second meeting with Martin Heidigger in Germany after the war. It is a film largely about ‘thinking’ – and the greatest compliment that could be paid to director and co-writer (with Pamela Katz) Margarethe von Trotta is that she makes long scenes of Hannah smoking and thinking supremely watchable. Margarethe von Trotta is the New German Cinema director who has struggled the most to get a decent film release in the UK. Some of her films have had pretty bad reviews but I’ve only seen the two releases which got some support, Das Versprechen (The Promise) from 1995 which I liked a great deal and Rosa Luxemburg from 1986 which I enjoyed, but can’t remember very well. Rosa Luxemburg was another great German Jewish figure, also portrayed by Barbara Sukowa. Margarethe von Trotta has been careful to avoid the tag of ‘woman’s film’ or ‘feminist director’ but it is worth noting that she works closely with other women as creatives and often features women as central characters in her narratives. Hannah Arendt was photographed by Caroline Champetier and edited by  Bettina Böhler.

One of the social gatherings at Hannah’s New York apartment.

A few days after seeing the film I came across the concept of ‘prosthetic memory’ at the Chinese Film Forum (in conjunction with films about the Nanking Massacre in 1937). This suggests that film and other media can act as a kind of constructed historical memory coming between an individual and a historical event. I was profoundly moved by Hannah Arendt, partly through the excellence of the filmmaking and the performances but also because of my own personal memories. I was 11 when Eichmann was captured and I remember the furore surrounding the trial. I didn’t fully understand it at that age but I was aware of the issue and I think it was a defining moment re representations of the Holocaust (though I didn’t know that term at the time). But perhaps as important was the film’s use of costume and hairstyles etc. My mother was born the year after Hannah and she wore similar boxy suits in the early 1960s. The film brought back a lot of memories associated with that time. Margarethe von Trotta’s direction and Barbara Sukowa’s performance captures a thinking woman, but also a real emotional woman in a loving relationship and with a group of friends and supporters. I believed everything that Hannah said and I followed the arguments carefully – but I also responded to her as a recognisable woman. Her relationship with her husband (an interesting character in his own right as played by Axel Milberg) is also very well presented.

I must have missed the moment near the start of the film when Hannah’s American friend is introduced. She is played by Janet McTeer, a remarkable physical presence who defends Hannah like a mountain lion. It was only afterwards that I realised that this was Mary McCarthy whose novel The Group I read as a teenager. I hadn’t previously researched McCarthy’s interesting political background. The only disappointment for me was that Julia Jentsch has such a small role in the film as Hannah’s loyal assistant. She is one of the many German actors in the film which features both English and German dialogue.

If Hannah Arendt sounds like a film filled with speech and long periods of solitary smoking, it is – but it’s also about ferocious arguments and it includes one of the most impassioned public lectures you are ever going to have the pleasure to watch. If you can find it in a cinema, go for it – I’m hoping we get it in Bradford in December.

Posted in Films by women, German Cinema, Politics on film