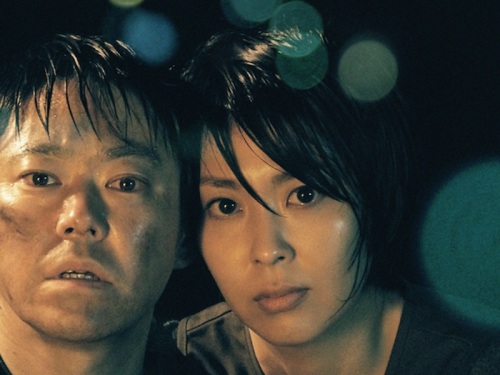 Writer-director Nishikawa Miwa was in attendance for this screening and through the excellent interpreter, whose name I didn’t catch, she was able to give the audience plenty to think about. It’s quite a long film (134 mins) and we didn’t leave NFT2 until around a quarter to midnight. I enjoyed every minute.

Dreams for Sale is a fascinating comedy-drama with two excellent lead performances by Matsu Takako (the teacher in Confessions) as Satako and Abe Sadawo as Kanya– Mr and Mrs Ichizawa, the central couple. At the beginning of the narrative, a fire in their restaurant as Kanya is preparing food destroys their investment and shakes their confidence. Satako recovers quite quickly and goes to work in a noodle bar but Kanya, the chef, is hit badly and starts to drink. However, a chance encounter with a woman he knows provides access to a new sum of money. At this point, we realise that we’ve seen this woman before in a sequence which seemed inconsequential at the time. This is a strategy Nishikawa develops through the film. The audience needs to stay awake to remember everything they have seen and link scenes together.

Satako is at first upset that her husband has got something from another woman, but then she starts to recognise that her husband, though not conventionally handsome, has a charm that seems to attract vulnerable women and she begins to work out how to use this quality to ensnare women with access to money. The couple will eventually become an adept pair of ‘marriage fraudsters’. Posing as his sister, Satako finds women and prepares the way for Kanya to seduce them into ‘pledging’ money for marriage – or simply because they will do anything for him.

Nishikawa Miwa told us that she had researched marriage fraud in Japan and that it was a significant issue. The obvious course would have been to make the film a crime story – how will they be found out, what will happen to them? There are also comic elements to exploit in the suspense as the stories of deception become more difficult to set up and control and we imagine all the duped women turning up at the same time. Indeed, some reviewers see the film as a very controlled farce. However, though there are elements of both crime film and comedy, Nishikawa plays it much more like humanist drama. What she really wants to do is to explore love and marriage – what does the deception do to the couple, what do they find out about themselves? They are not ‘bad people’ and most of the women they defraud have money to spend and they are getting something from the deal. Satako and Kanya also want to spend the money on a new venture, telling themselves that they will pay everything back. This doesn’t make the crime acceptable, but it does point us towards thinking about the current state of society in Japan and in a way the film fits in with the long-running series of stories about unemployment amongst skilled workers in the face of a stagnant economy. In some ways the film attempts something similar to Villain, the very successful awards winner in Japan that failed to find audiences in the UK. I think Dreams for Sale is probably a better offering for UK audiences.

This is a very good film that reveals its many qualities gradually and makes some demands on audiences who are repaid handsomely in the way in which the narrative develops. I hope it gets wide distribution and I recommend it highly if you get chance to see it.