A picture beyond the photographer’s intention: a semiotic analysis of Blow-Up 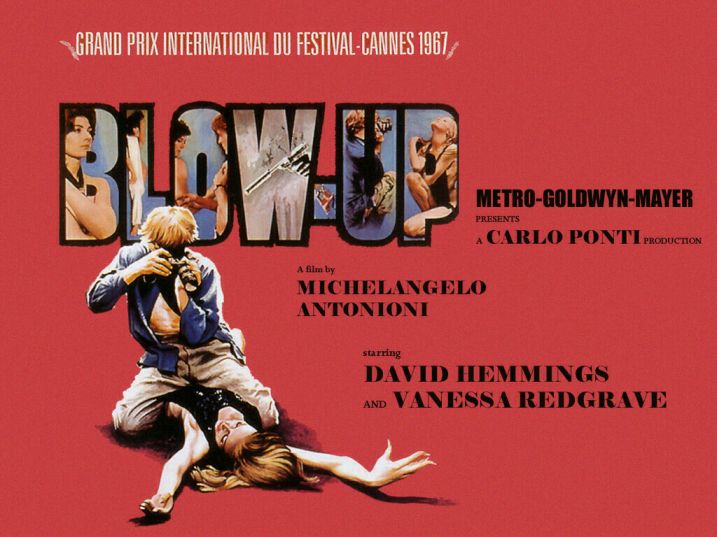 This paper was submitted by Giuseppe Raudino (see contact details below)

Michelangelo Antonioni’s Blow-Up (UK 1966) is a deep reflection about reality and meaning. What is real? Why is that real? And what does it mean? These are the questions that the viewer is obliged to ask himself/herself throughout the film.

The opening scene establishes the interpretative challenge the audience is repeatedly asked to accept: a group of mime artistes – masked merrymakers – are acting strangely in London, riding an overcrowded Land Rover and suddenly spreading themselves in the city streets, among the traffic, with no apparent reason or goal. What are they actually doing? What are their visionary gestures trying to accomplish? They seem so unreal within such a familiar context . . .

The film tells the story of Thomas (David Hemmings), a photographer who encounters a series of people, most of the time in quite odd circumstances. As a photographer he is meticulous, especially when he has to arrange the set and give orders to his models. Nothing he wants to depict in his photographs is left to chance, there is no space for the random in his shots: the photographer’s will requires accurate composition of the images even if that entails grabbing and stretching a model’s leg or engaging in an ‘intimate’ photo session with Veruschka von Lehndorff, with whom Thomas is even ready to mock-up a sexual encounter to make her reveal her sensuality to the utmost.

This concept of a full control over the product (and the related message conveyed by it) comes to a crisis when Thomas, after having blown up a picture of a couple in a park, accidentally discovers that there is a man hidden in the background, beyond a hedge. Further enlargements will show that the man is holding a gun. This third person could have never been spotted in a normal-sized photo, where his presence would have remained just a meaningless stain, but now he is there, unexpected, vigorously included in the photograph despite the photographer’s intention.

The new presence in the picture suddenly changes the original meaning of the picture itself. This implies that an (unnoticed) element may affect the reality and the context it refers to. In Thomas’ case, the armed man adds a dark connotation to the entire scene, bringing the idea of mystery, murder and drama to what was simply a romantic rendezvous in a park.

Thomas (David Hemmings) and Jane (Vanessa Redgrave) in the park

Thomas is puzzled by what he found out and feels the need to investigate more. He is overwhelmed: probably, for the first time, the reality in his pictures is different from the reality he had in mind, that reality he wanted to construct.

The film is actually disseminated with elements in strong opposition to their contexts, and this clearly is a narrative means by which Antonioni invites the viewer to rethink the significance of something in relation of its environment and vice versa. Let’s consider, for instance, the episode of the propeller.

Thomas goes to an antiquarian shop, which is full of statues, boxes, paintings and a lot of rare objects. What does Thomas finally choose? A wooden propeller, which is a piece of something else (i.e. an element of an aeroplane). The propeller will be later placed in Thomas’ studio, totally out of its original context, far away from aerodromes, hangars and so on, but it will certainly bring a new meaning to its new environment.

The Yardbirds at the Ricky Tick gig

Another example of out-of-the-context elements occurs in the scene at the Ricky Tick, the famous club in which the Yardbirds are playing live. After having experienced some problems with the amplifier, the guitarist lets his inner aggressiveness come out and smashes his instrument, throwing some pieces to the public. As Thomas picks up the guitar neck, he realises that the crowd is ready to fight in order to obtain that precious relic. Then he runs away, chased by the Yardbirds’ fans, but when he gets rid of them and finds himself outside the club, he throws away the guitar neck. Some pedestrians have a glance at this strange object laying on the sidewalk but eventually do not show any interest for it. All at once, the so much contended memento of a great rock band loses its value as soon as it is placed out of its original context.

Something similar happens when Thomas pays a visit to his neighbour Bill, an abstract painter. The latter shows a canvas onto which there are painted some rectangular and trapezoidal objects. Out of that (apparent) confusion, Bill points out an area, saying that it is a leg. Considered in absolute terms, that shape is just a rectangle, but within the painting it clearly becomes a leg, and it would be as such even without the interpretative endorsement of the author, because the context and the opposition with the other elements would make it a leg anyway. The parallel between Bill’s painting and Thomas’ photograph is more than evident: a shape and a stain are meaningless until a closer look (or an enlargement) unveils a new truth, urging further interpretations.

Finally – yet the examples might be more numerous – there is another scene in which the interpretation of what is supposed to be real and true is questioned. At a certain point, Thomas again meets Veruschka. There is a party going on and Thomas is surprised to see her, since she had told him that by that time she should have been in Paris. Once asked, Veruschka claims under the effect of some drugs that she is  in Paris. Is the model’s imagination less real than her factual location? The psychedelic dimension and culture presented in the film seems to suggest a clear alternative way for reading the signs that surround every character and build up each situation. Towards the end of the film, Thomas is somehow aware of this. What is commonly called “reality” isn’t something objective; on the contrary, it’s something subject to vary due to any little element, even an overlooked element. Perhaps it is with these thoughts that Thomas abandons himself on a bed after having smoked marijuana.

The final scene is strongly connected to the opening and shows the brand new attitude of Thomas about reality, meaning and interpretation. The mime artistes encountered in the initial frames of the film are now playing (or pretending to play?) a tennis match, but with no rackets and no balls.

Thomas is an improvised spectator who observes the match outside the court. Unexpectedly, the players throw the invisible ball beyond the fence and then stare interrogative at Thomas. Great suspense. Thomas makes some steps, stoops, picks up the ball and with an ample movement returns it to the visionary players. Then he resumes following the match, turning his head right and left, like everybody in the audience of a “normal” tennis match would do.

Thomas has learned a lesson. Fetching the ball means that he is now conscious about the fact that the reality goes beyond any straightforward appearance and a supposedly meaningless situation may become meaningful thanks to some elements, even overlooked, even imagined or dreamed. And the mime artistes don’t dream of anything but a better world.

The final section of the film on YouTube (but you’ll have to watch it there):

Giuseppe Raudino is lecturer at the Hanze University Groningen (the Netherlands) where he teaches Media Theory and Media Skills. He graduated in Communication Sciences from the University of Siena with a dissertation in Semiotics about Umberto Eco. His homepage is http://raudino.webs.com/