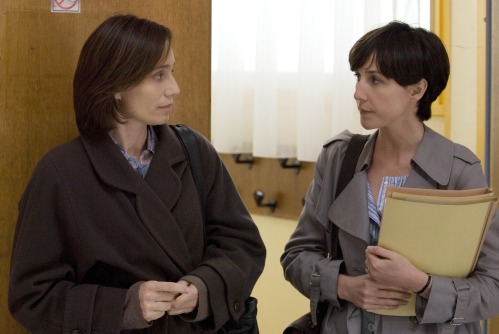 This is one of those well-made dramas that only seem possible in French cinema. It is intelligent with fine performances all round and an interesting theme which is given the possibility of development over a leisurely running time (115 mins). Kristin Scott-Thomas plays Juliette, a woman released from prison after 15 years. She is met by her younger sister who takes her back to a comfortable home in Nancy. The two sisters were estranged during the long prison sentence with the younger sister banned by her parents from making contact. But now Léa (Elsa Zylberstein) is a university lecturer with two young adopted children, a husband and a father-in-law disabled by a stroke. Her parents are out of the picture and she is determined that she and Juliette can become close again. But Juliette is withdrawn and this will clearly not be a swift rehabilitation.

I should say straightaway that I enjoyed watching the film in the recently renovated art deco Tyneside Cinema and the film is obviously drawing a traditional French cinema audience (i.e. an older audience who were in afternoon and early evening screenings in good numbers). However, I’m not sure that writer-director Philippe Claudel has made the most of the potential. (It was his first film, so overall I thought he did well.) This could be a great family melodrama, but he seems to keep the lid on any visual expression and offers a relatively underplayed score. This latter picks up a pun about fountains and water (the sisters’ family name is Fontaine) that also has echoes in a relationship that gradually develops with the local police officer to whom Juliette must report. He tells her about his obsession with the Orinoco River as part of a civilised attempt to be positive. What happens to this character later was a problem for me, but perhaps I missed something. On the plus side it was nice to see an Iraqi character and a feisty/annoying smart child from Vietnam as an adoptee.

The sense of a muted emotional discourse was reinforced by the digital print. I’ve noticed this before and it might be something with other digital prints of French films. My guess is that this was shot on High Definition Video and then produced as a digital print for some cinemas (but I can’t find any evidence to back up this observation). The print I saw was super sharp, very ‘cold’ and clinical, yet in the night-time scenes lacked contrasting light and shadow. It was so bad that I found it distracting.

One real positive for me was that the film was set in Nancy. There wasn’t too much to see of the city, but it was good to have a drama set outside Paris. I have two other observations worth recording. First, I’m increasingly aware of how many French films we never see or receive only limited distribution. I wondered if I’d seen Elsa Zylberstein before and I have – but more than 10 years ago. I hope it’s not so long until next time. And finally, my ear for French accents is almost non-existent, so I was intrigued by the plot information delivered in a mealtime dialogue that Juliette was ‘half-English’. Does Kristin Scott-Thomas really need this kind of script support? Does Charlotte Rampling get the same? (Not in my memory.)

I’m intrigued that other posts see this as an award-winning performance by Thomas. She is certainly very good, but I wonder what audiences find to praise one performance over another. I think the highest praise I can give is to say that she delivers the performance that the script required and she did it flawlessly.