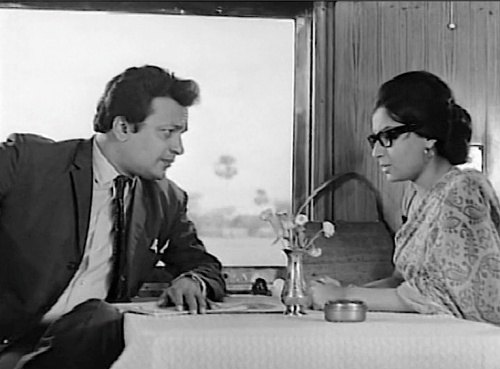 Andiram and Aditi meet in the dining car.

Nayak (or The Hero) was not released in UK cinemas, a relatively rare occurrence with the films of Satyajit Ray at a time when he was at the peak of his fame. There are various reasons why the film might not have appealed to UK distributors (assuming that it was available). It would be sad if it was because the film seems less ‘realist’ and certainly less concerned with the ‘exoticism’ of India – two traits appreciated by the supporters of Ray’s earlier village-set and ‘historical’ works. Perhaps it seemed inaccessible because despite its modernity it deals with Indian [upper] middle-class mores that were more difficult for the Western audiences of the time to understand. It also feels like one of the most carefully ‘constructed’ of Ray’s films. It shares with Kanchenjunga (1962) an original screenplay by Ray himself (many of his other films are based on Bengali novels) and a range of characters brought together in a controlled space. In Kanchenjunga it is the promenades of Darjeeling and in Nayak it is an express train travelling between Calcutta and Delhi.

Andrew Robinson in Satyajit Ray: The Inner Eye (revised 2004) writes very well about this shared set-up and he describes it as a “microcosm of Bengali middle-class sanctimoniousness”. But it also seems to me that Ray himself is rather sniffy about his characters (or that’s the impression I get from Robinson) – which is dangerous because the central narrative line explores something close to Ray’s own experience. The ‘Hero’ is Arindam Mukherjee, a major star of Bengali popular cinema who has been invited to Delhi to receive an award. Because he has left his arrangements late he must take the train from Howrah instead of flying. Apart from the opening sequence, the whole narrative is played out on the train, though several earlier parts of the story are revealed through flashbacks. Ray decided to cast a ‘real’ star of Bengali cinema, Uttam Kumar, in the title role, arguing that although he didn’t value ‘commercial cinema’ he did think that certain actors had talent which he could utilise. Robinson’s description of Ray’s feelings about working with Kumar suggest that the director behaved quite badly and indeed he seems to have patronised the actor. In order to pursue his own ideas about cinema and to raise questions about stardom, Ray wrote the second main character as a rather serious young woman who is the editor of a women’s magazine. Aditi (Sharmila Tagore) is pushed by her travelling companions into interviewing Arindam even though she herself is dismissive of popular cinema. Thus Ray is able to raise questions about ‘realism’, ‘conscience’ etc. in relation to cinema, especially since Aditi is sat in a ‘chair’ coach (i.e. the cheaper seats) and the couple meet in the dining car. Aditi is thus the ‘outsider’, commenting indirectly on the privileged world inside the sleeper.

The other passengers in the First Class sleeper include a businessman and his family, a elderly writer and an advertising executive with his younger wife. In the flashbacks we see the actor during incidents in which he has often behaved badly. We also experience two of his nightmares when he tries to doze off. I suspect that it is these scenes that put off distributors in the West. Ironically, Ray is using devices that might have appeared in Hollywood or Hindi cinema films from the 1940s/50s (though in his blog Omar refers instead to Fellini and Bergman).

Robinson tells us that most of the film was shot in a studio in Calcutta, yet there are several shots of the railway. I did feel that the sleeper was much more ‘modern’ and luxurious than the Indian Railways trains that I have ridden – but probably I wasn’t in the ‘best’ carriages! Overall, I enjoyed the film. I thought Uttam Kumar was very good, as was Sharmila Tagore. I didn’t mind the flashbacks and although they are ‘traditional’ rather than ‘modernist’, they do signal a shift in Ray’s practice to include more non-realist material and this became a more common feature of his work in the late 1960s and early 1970s. However, Nayak still qualifies as a ‘humanist film’ in which Arindam has all his weaknesses exposed but emerges at the end as a rounded character with his good and bad points – much like everyone else.

The more I think about the film, the more interesting it gets. A man and a woman meeting on a train, especially in a dining car, is a feature of several classic romances and thrillers – Hitchcock’s The Lady Vanishes and North By Northwest for instance and the opening of Richard Linklater’s Before Sunrise. But Ray subverts our expectations. The couple do not develop the kind of romantic relationship we might expect, instead we get a much more (intellectually) interesting relationship that develops as Aditi learns more about Arindam. In the same way, although we learn about Arindam’s life, this isn’t a critique of the film business as such. Marie Seton, in her Portrait of a Director (1971), writes very well about the meanings of Nayak. She suggests that the film tells us a great deal about the people in the sleeper compartment and also explores several aspects of Bengali society. For instance, she comments on Arindam’s handling of cash and his fears about losing his successful box office position, pointing out that the prevalence of so-called ‘black money’ in the financing of popular films in India at the time generated insecurity. Arindam’s background includes references to the Bengali theatre tradition and to left-wing politics – again ‘local’ factors in Bengali life in the 1960s. I was intrigued that the advertising man’s wife is called ‘Molly’. I wondered if this was an Anglo-Indian name? Or is it simply a corruption of a Bengali name? As Seton suggests it is these touches that make the film so rich in meanings.

This website offers a very detailed reading of the film (and is obviously full of spoilers):

This entry was posted in Bengali Cinema, Indian Cinema and tagged Satyajit Ray. Bookmark the permalink.