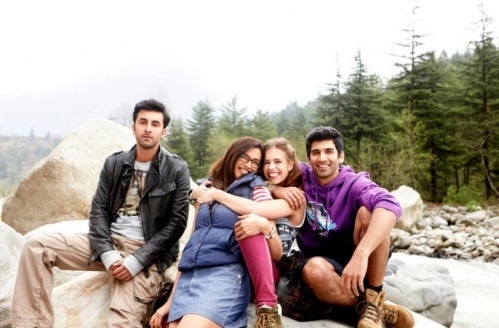 The four friends on the trekking holiday – a composition that clearly attempts to resemble a conventional holiday photograph. From left to right: Ranbir Kapoor, Deepika Padukone, Kalki Koechlin and Aditya Roy Kapoor.

Here’s India’s biggest film of the year so far, a Karan Johar production no less. The Hindi title translates as ‘This Youth Is Crazy’ – not really very helpful as a title as the film is bang-centre mainstream and conventional. I decided to see it partly because I’ve been impressed by two of the leads, Ranbir Kapoor and Kalki Koechlin, in previous films and partly because I wanted to try to keep abreast of where mainstream Bollywood is going. I enjoyed the film but the central story is probably not strong enough to sustain the running time of around 150 minutes and the second part of the film seemed less successful than the first.

The first half is told in a flashback to eight years ago when three friends from school each now in their early twenties are about to set off for a trekking holiday in the Himalayas. Aditi (Kalki Koechlin) then meets a fourth acquaintance from school, Naina (Deepika Padukone), who decides at the last minute to join the trip. Studying medicine, Naina is trying to escape from her image of being the school nerd. The two young men Bunny (Ranbir Kapoor) and Avi (Aditya Roy Kapoor) rather ignored her at school and the trip is Naina’s chance to prove them wrong. After the intermission, the film moves into full-on wedding mode. To be fair, it’s not quite the wedding we were expecting but in narrative terms it’s not really exploited that much. What was also disappointing for me was that whereas in the first half there was some grounding in ‘real India’, albeit for middle-class youth, the second half is typical Bollywood indulgence in glamour with overseas shoots and a beautiful Udaipur palace location. Throughout both halves, the colours are bright, the dancing impressive and the music often deafening (especially in a relatively empty cinema for an early evening show).

Nevertheless I found the film interesting. It does what Bollywood ‘coming of age’/romance/musicals should do and offers mainstream entertainment that is fresh and palatable for most audiences. Ranbir Kapoor and Kalki Koechlin are wasted because they aren’t asked to be different enough. Deepika Padukone takes her opportunity well but Aditya Roy Kapoor is also not given enough to do. I’m not giving too much away if I say that the film’s resolution is what we expect but that it is undercut by a composition that sees Bunny/Ranbir’s face in close-up gazing towards the audience over Naina/Deepika’s shoulder with an ambivalent expression. The ending (on New Year’s Eve) also sees one of the characters in isolation – with a drink problem and a failing business. This doesn’t seem conventional at all.

Hunting round the reviews I found some interesting comments. Bollywoodtrade pointed to what were claimed as links to 3 Idiots.  Bunny does in fact follow a similar career path to one of the three students and he carries around a letter for the first half of the film that he produces at Intermission time and which changes the narrative. There is also a succesful engineer in the film – a ‘moneybags’ set up to marry someone. I’m not sure that there is much else but the comparison is interesting Chetan Bhagat’s novels seem to offer much more depth in their ideas – even if some of the film adaptations don’t take them too far – and I don’t think that Yeh Jaawani Deewani will prove to be as influential as 3 Idiots. However, the bollywoodtrade review makes some other points. It’s a review drawing on a screening in Indore with ‘real audiences’ and the reviewer quotes the approval of an older man approving of the message that ‘marriage should come before career’. The review also suggests that the film is successful because the ‘wedding season’ is in full swing in India (and it’s true that, much like Monsoon Wedding, there is some focus on what goes into the wedding preparations). On the other hand, the film is seen as in some way ‘progressive’ or ‘modern’ in that the younger male and female characters discuss physical relationships quite openly – and that they drink in the manner of Western young people (too many spirits for my taste). This latter isn’t new of course, whisky drinking was a feature of Hindi cinema in the 1960s – but it was usually a sign of a dissolute life.

As a contrast to this, AccessBollywood, a blog by an ‘entertainment writer’ in Chicago, takes the film to task for its sexism. Kathy Gibson suggests that the film switches gear away from Naina in the first half to focus on Bunny in the second half. She thinks he’s a bit of a jerk and that the narrative should remain focused on Naina. I agree with her overall view of the film and as I’ve indicated already, I think that Deepika Padukone has the best-written part and she handles it well. There is a sequence towards the end of the film when Naina persuades Bunny to stay and watch a sunset rather than dashing off (he’s been to lots of places and done lots of things, perhaps he should chill a bit more?). There is a running discussion about following dreams and deciding what to do with your life which I found quite affecting. This was good writing and the actors were capable of building on that but the script overall didn’t seem to know where to take it. One of the failures for me was not using Kalki Koechlin to the full. This woman has got a lot to offer but at the moment it seems to be independent cinema which knows how to exploit her talents to the full.

So, overall a fun night out but perhaps don’t try to read too much into Yeh Jaawani Deewani.  On a technical level, however, it’s clear that Bollywood entertainment is in safe hands.