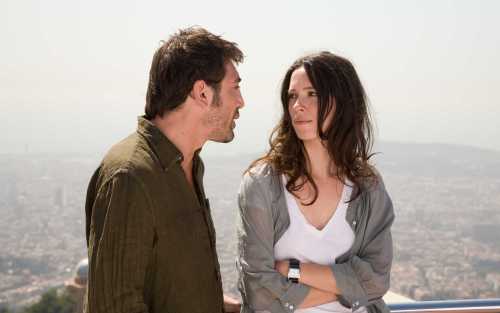 I don’t think I’ve seen a Woody Allen film since the early 1990s and I wouldn’t have gone to this one if my partner hadn’t suggested it. I enjoyed aspects of the film but overall it was a bit of a mess. Trying to make sense of what Allen was trying to achieve, I could only think of 1930s/40s musicals and romantic comedies. I’m not sure why, but I thought of Fred Astaire in Flying Down to Rio and Jesse Matthews in First A Girl. I also thought about something that might be directed by Max Ophuls, perhaps La Ronde? But all these references are to films with a sureness of touch that seems to have evaded poor Woody. He has four excellent actors, a beautiful city, one of Spain’s greatest cinematographers in Javier Aguirresarobe and some beautiful guitar music. Unfortunately, he doesn’t seem to have done too much work on the script.

The voiceover narration has come in for a lot of stick. I have no problem with it as a device and it could work in this context, but not delivered by the rather ugly voice here (which I believe comes from someone best known for US cop shows). The narration is also ungrammatical and I spent a couple of scenes re-running the lines in my head. The plot is ridiculous in parts and insulting to the intelligence of the audience. I think that Bardem’s character is at some point referred to as a ‘Catalan artist’, yet he comes from Asturias. Vicky is supposed to be doing a Masters in ‘Catalan identity’ but she can’t speak Castillian very well and seems unaware that Catalans speak a different language (or rather the whole script seems to ignore this local peculiarity). OK, if this was a Hollywood romcom we wouldn’t worry about this, but it’s a Spanish co-production and the script insists on several scenes in which Javier Bardem has to keep telling Penelope Cruz to speak in English, so language is an issue.

So, it’s a mess, but there is still plenty to enjoy. Bardem and Cruz are wonderful (and make me want to watch Jamon, Jamon again) and Scarlett Johansson is perfectly fine. The revelation for me was Rebecca Hall. At first, I found the character irritating but as the narrative developed she got more and more interesting and I thought that there was a real sense of sexual tension in the way she tried to resist Bardem, but really wanted him very badly. I’ve not seen her before and now I’m looking forward to the UK TV plays set in Yorkshire in the 1970s (Red Riding 1974) and written by David Peace in which she has a role.

Woody Allen works in his own way, but I think if this had been written by someone else and Allen had directed it in a particular style suited to its genre, it could have been very successful.