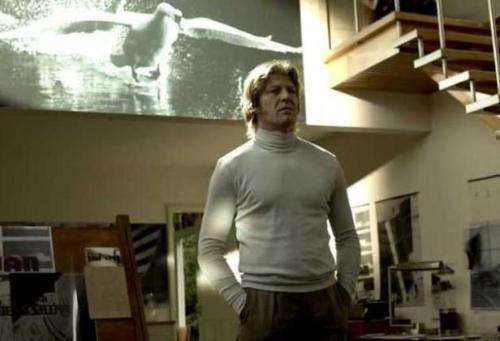 The TV ‘event’ of the year so far in the UK was arguably the broadcast by Channel 4 of the Red Riding mini-series, or perhaps the three-part ‘special’, in March. The media community of critics and industry commentators fell on these three films (around 100 minutes each) as the first evidence for several years that UK TV could match the ‘quality’ offerings of HBO and other American producers. The argument has been made that HBO could not exist in the UK as the subscription TV audience (for drama) is not large enough to merit sustained production of filmed series. Both Channel 4 and the BBC, the two publicly-owned channels have found themselves needing to find co-production partners in Canada, the US or Europe in order to fund major series.

Red Riding is a three film adaptation of four novels by David Peace, one of Granta magazine’s ‘Young British Novelists’ in 2003. Peace was 32 when his first novel was published in 1999 and 35 when the quartet was completed in 2002. Since then he has completed other novels such as The Damned United (2006). The three films are essentially ‘cinematic’, all directed by UK film directors (two in ‘Scope) and co-produced by Film 4 with Revolution Films (the company owned by producer Andrew Eaton and prolific British director Michael Winterbottom) and LipSync Productions with support from the Regional Screen Agency, Screen Yorkshire.

There seem to be mixed messages about the technical production credits, but it seems like the first two films were shot on 16mm (Super 16?) and the third using the Red One digital camera. All three were printed to 35mm for possible cinema releases outside the UK. All three have been screened in at least one cinema in Leeds (West Yorkshire being the location for the stories) and there are indications that the films will be released in the US and other territories. For those who can’t wait, the UK Region 2 DVD box for the trilogy has already been released.

So why all the fuss? First the Film 4/Revolution Films tie-up means that this was always going to be innovative/challenging etc. The three directors, Julian Jarrold, James Marsh and Anand Tucker are all front-rank, experienced directors with Marsh of Man on Wire fame, being one of the most celebrated UK directors of recent years. Then there is the cast, one of the finest ever assembled for a UK production. Northern talent dominates UK drama production and half of it is on show here with Paddy Considine, David Morrissey, Warren Clarke, Mark Addy, Maxine Peake, Jim Carter, Sean Bean plus Peter Mullan, Rebecca Hall, Eddie Marsan, Sean Harris, Andrew Garfield etc. from points South and further North.

The novels were adapted by Tony Grisoni, who previously worked with Eaton and Winterbottom on In This World (2002), one of the great and unjustly neglected British films of recent years. He has also written for US independents such as Terry Gilliam on Fear and Loathing in Las Vegas and Tideland. Grisoni’s solution to the problem of budget restrictions (which meant three films rather than four) was to cut out the second book (1977) focusing on the infamous ‘Yorkshire Ripper’ investigation and to rework the other three, moving some events from one book story to another. The films carry the book titles, 1974, 1980 and 1983, but the final film includes elements of the first story in flashbacks – the whole thing is very confusing and reading the books simply adds more detail without necessarily explaining everything. Overall, Grisoni remained ‘faithful’ to the tone of the novels, whilst changing characters and story structures. As for the actual budget of the three films, I haven’t yet found it, but I think the cost was £2 million per film. This doesn’t sound much, but it’s about average for a 100/120 minute filmed TV drama and actually slightly more than the median budget for a UK feature film for theatrical release (where budgets have dropped alarmingly – or perhaps it’s a good thing?).

What’s it all about? That’s easy – it’s corrupt police power, brutality against prostitutes, criminal business dealings, naive journalists etc. David Peace is often described as a disciple of James Ellroy. It’s ‘Yorkshire noir‘ with Peace drawing on his childhood memories of the Ripper investigations and the sheer brutality of his home territory on the outskirts of Wakefield. He also draws on the literature of the area’s most famous literary figures, the 1960s writers Stan Barstow and David Storey.

For those outside the UK, it’s worth explaining the title. A ‘riding’ is old Norse for a ‘thirding’ – the Viking invaders dividing up the land into three. These became the North, East and West Ridings (there never was a South Riding, though this was used as a fictional district by the novelist Winifred Holtby). In 1974, local government in England was revised and the ridings disappeared. The largest and most populous, the ‘West Riding’, was split in two and two new ‘metropolitan counties’ (i.e. primarily urban areas) were created, known as South Yorkshire (Sheffield/Rotherham/Doncaster/Barnsley) and West Yorkshire (Bradford/Leeds/Wakefield/Huddersfield/Halifax). The Red Riding Trilogy is based in the new West Yorkshire of 1974 – when the police force was also a new separate authority. I confess that when I first heard the title, I leapt to the conclusion that it referred to the political hue of the region, i.e. ‘red’ socialism. But, it was Sheffield in South Yorkshire that was known in the 1970s as the ‘Socialist Republic of South Yorkshire’. Not that politics weren’t important in West Yorkshire, but Red Riding has other meanings and in the novels much is made of characters known as ‘the wolf’, ‘the owl’, ‘the badger’ and ‘the rat’, not to mention the swans. This suggests that we are in the territory of a very macabre fairy story about Little Red Riding Hood and the big bad wolf.

So far, I’ve read one and a half of the novels and watched the TV series. I’ll report back when I’ve discussed the series at a public event coming up soon.

This entry was posted in British Cinema, Global television and tagged Red Riding. Bookmark the permalink.