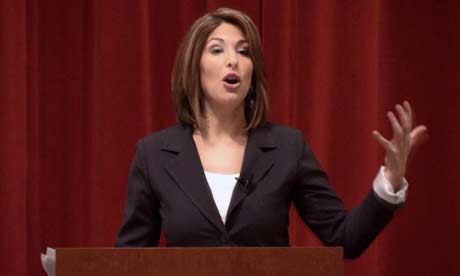 Naomi Klein presenting her take on the Shock Doctrine

The Shock Doctrine is a documentary produced by Revolution Films for the digital TV channel More4 in the UK. It is written, edited and directed by Michael Winterbottom and Mat Whitecross who also worked together on The Road to Guantanamo (2006). The film is structured around the public lectures delivered by the Canadian writer and activist Naomi Klein who produced a book with the same title in 2007. The Guardian reported that Klein has since asked for her name to be taken off the credits for the film since she would have preferred a rather different approach to be taken – this after she initially approached Winterbottom to make the film (see the Times Online). Klein had originally made a short film with Alfonso Cuaron which is currently on YouTube and this is what she wanted Winterbottom to expand:

Klein’s book presents her argument that it is possible to trace the connection between the methods espoused by the right-wing ideologues in the US (including the CIA and the Chicago School economists led by Milton Friedman) and the tactics deployed in peace and war via US political, economic and military power – part of what she terms ‘disaster capitalism’, a process whereby planned economies are effectively destroyed in order to allow ‘unfettered capitalism’ to create a much more unequal society in which the rich get much richer and the poor suffer most. The story begins in the 1950s with CIA experiments with methods of torture using shock treatment and sensory deprivation to get compliance from prisoners (subsequently used in Chile and then Iraq more than 40 years later) and runs through the pain and suffering caused by Pinochet, the Argentinian Junta, the economic policies of Thatcher and Reagan, the capitalism out-of-control in Russia and Eastern Europe after 1989 and the consequences of 9/11, the ‘War on Terror’ and the disasters of Iraq and Afghanistan (and the scandal of the domestic disaster of Hurricane Katrina).

Winterbottom’s decision was to edit passages of Klein’s address in various locations into a continuous filmed history comprising archive material edited together with a bridging commentary narrated by a ‘voice of God’ – actually Kieran O’Brien. Klein would have liked more interview material.

Watching the film on More 4, a commercial channel with irritating ad breaks, sponsorship clips from Volkswagen and confusing trailers for other docs meant that it wasn’t possible to fully appreciate the editing work of Whitecross and Winterbottom, but I think that they were probably right in terms of maintaining flow to limit the interview material.

The film previewed at Berlin earlier this year and has been bought by E1 for distribution in North America. I would guess that it will eventually appear on DVD. It will cause a furore simply because it is a straight down the line left analysis. It has the advantage over Michael Moore of being quite sober and chilling, but is equally accessible. I have to confess that it does get pretty simplistic at times (e.g. in the discussion of Milton Friedman’s influence on UK economic policy, which began with Callaghan before Thatcher) but overall I would agree with its stance. The biggest plus comes from Naomi Klein’s admirably direct polemic which creates a powerful ‘meta narrative’ – she actually analyses the narrative of the Shock Doctrine across fifty years and in doing so puts the boot firmly into the postmodernists whose frivolity and claims for the end of history and grand narratives has threatened to evacuate politics from public discourse. The doc may be a little glib but it’s great to hear a political polemic delivered using intelligent language as eloquently as she does (the lectures look very impressive) and without having to resort to the tricks of Reality TV.

I’m not sure that there is much new in the argument but the footage is worth seeing and the overall impact of the message is what is most important. The sickening footage of Thatcher and Pinochet together juxtaposed with footage of the horrific events of the American-backed coup in Chile in 1973 (from Patricio Guzmán’s film Battle of Chile, I think) are what it is all about. In a brief statement before the screening, Winterbottom said he made the film because his daughter was now old enough to vote and he wanted her to be aware of how what happened before she was born is still relevant to what is happening now.