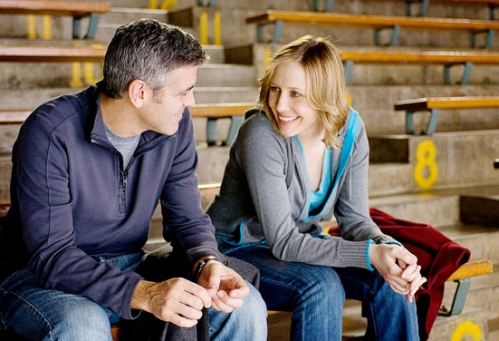 George Clooney and Vera Famiga in Up in the Air

A strange couple of days returning to mainstream Hollywood Cinema (though one of the films is probably thought of as ‘independent’). I’m struck by the fact I have spent four generally pleasurable hours in a cinema only to come out and read some rather odd reviews. Is it me or are reviewers particularly dense these days?

First up is Up in the Air in which George Clooney leads Jason Reitman’s follow-up to Juno. I was grabbed immediately by the credit sequence which offers a delirious montage of aerial shots of the US cut to a very distinctive take on Woody Guthrie’s alternative national anthem This Land is Your Land by Sharon Jones and the Dap Kings. There are many signs that this is a movie from the director of Juno; the fast-cutting montage of procedures; the acoustic folk songs and the appearance of J. K. Simmons and Jason Bateman (very fetching with a beard and reminding me of Xabi Alonso – no higher praise from a forlorn Liverpool fan). And then there is a perky, irritating (until made human) young woman. The big difference, of course is Clooney in Cary Grant mode and, most of all Vera Famiga. Famiga offers one of the most erotic performances I’ve seen in a long time. Why isn’t she in more such roles? I still remember Scorsese’s disappointing The Departed in which she was anything but disappointing. The film also reminded me of Clooney’s previous erotic highlight – with Jennifer Lopez in Out of Sight – a film which shares a similar mise en scène of hotel bars and bedrooms with the sexy clink of whisky tumblers and the clunk of the hotel room door.

Up in the Air is clever, witty and polished and works like a dream for the first two-thirds of the narrative. Clooney is Ryan, the urbane corporate executioner who flies around the US clocking up airmiles and trying to avoid coming ‘home’ to his rented room. He prefers the anonymity of relatively upmarket hotels. The ‘inciting incident’ is the sudden appearance of young Natalie (Anna Kendrick) a psychologist with a plan to fire execs via iChat or its equivalent. Ryan is compensated for this threat to his livelihood by meeting the perfect ‘woman on the road’, Alex (Famiga). So, we have three narrative lines. Will Clooney/Ryan successfully educate/humanise Natalie, can he maintain his solitary lifestyle and will his relationship with Alex develop further than just an occasional night together? Of course, these are inter-related in interesting ways. If Ryan can convince Natalie that firing someone needs a human touch (he is obliged to take her with him on a trip around several clients) he will inevitably challenge his own previously impermeable sense of distance from what he does. And this may in turn make him weaker in the face of the desire he feels for the delicious Alex. In this respect, the script carefully tempts Ryan into a return to his childhood home to attend the wedding of his younger sister, taking a surprised Alex with him. Presumably, Ryan is so dense in terms of social knowledge that he just doesn’t realise that weddings (like funerals) are deadly affairs where all kinds of family skeletons and dangerous social relationships are routinely given an airing.

When I glanced at reviews, I wasn’t surprised by the large majority of glowing, nay gushing, reviews, but I was slightly taken aback by the isolated very ‘anti’ reviews. I do understand the argument that says the film ultimately becomes a conservative commentary on marriage and family life. I did feel that the ending was somehow not satisfactory, but I’m not sure why. In many ways the film is like Juno in that it can be read in different ways. Whereas the dilemma in Juno was about abortion, here it is about remaining childless by choice and not succumbing to the peer pressure to conform to bourgeois family life. This speaks to me much more than the pregnancy question and I’m not sure the last third of the film is as ‘conservative’ as some critics claim. Perhaps it’s just a problem in the script that will take two or three viewings to sort out. I certainly won’t mind watching it again. The other point in the film’s favour is that it does inhabit a real world of ‘downsizing’. So it’s a grown-up comedy with a slight satirical edge and three great performances plus some neat technical work and assured direction.

Up in the Air is perhaps a ‘smart cinema’ comedy – although that term is now possibly out of date. The film has a coldness and a cynicism which is ‘smart’, but it also has scenes of real human warmth. This makes it, in the crass terms of modern Hollywood, too clever to be mainstream. What then of It’s Complicated by the woman who a large segment of American critical opinion seems to hate, Nancy Meyers?

Meryl Streep and girlfriends in the 'old kitchen' in It's Complicated

I didn’t see Something’s Gotta Give, probably because of Jack Nicholson’s gurning and I avoided The Holiday because of similar misgivings about Jude Law and Cameron Diaz. (The truth is their personas are too young for me.) Having said that, I quite enjoyed What Women Want despite Mel Gibson. It’s Complicated teams Meryl Streep with Alex Baldwin and Steve Martin in a comedy with a plot that could easily have figured in a 1930s Hollywood studio picture. All three play well and though there is nothing particularly exciting about the aesthetics of the film, I found it to be perfectly acceptable Saturday night entertainment – especially for us aged people who can be quite entertained by middle-aged sexual dalliances.

The plot sees Jane (Streep) as a (very) successful artisan baker in Santa Barbara who after ten years divorced from Jake (Baldwin) stumbles back into a relationship with him during the graduation weekend celebrations for their son. Jake has re-married a younger woman who is now sending him to the fertility clinic in the hope he can father another child. Meanwhile, Adam (Martin) is designing Jane an extension for her (already extensive) house. Adam has divorced more recently and is seeking a woman near his own age.

When I turn to the reviews listed on IMDB, I find first of all that most of them are by male reviewers who don’t take kindly to Ms Meyers – a veteran of what might be called ‘family comedies’. This is unfortunate, but at least fits the stereotype of male reviewers. More surprising, the couple of women whose reviews I read were completely dismissive of the film. They complained about the grown-up children and I would concur with this to the extent that the three of them didn’t look old enough to have been to university and they were particularly wimpish (apart from the excellent John Krasinski as the putative son-in-law). But they aren’t particularly important to the plot. No, the real reason to despise the film is either because it is ‘kitchen porn’ or because it doesn’t deal realistically with the sexual desires of 60 year-old women. A good example of this is MaryAnn Johansen at ‘flickfilosopher’. She manages to combine these two critiques in this way:

“Perhaps the most distasteful thing about Meyers’ films, which include the recent Something’s Gotta Give and The Holiday, is that we’re simultaneously meant to rejoice and be thankful that Meyers is condescending to give in to the outrageous reveries of women who have nothing but fantasy left — or so we’re meant to accept is the case — while she also underlines how ridiculously impossible those fantasies are. It’s like with that amazing kitchen. That’s the “before” kitchen, the one not good enough for Jane, the one she needs to clear away to make room for the “real” kitchen she has always desired. That’s how awesomely awesome Jane is, and how pathetic you the viewer are: the kitchen you’re swooning over is the one she can’t wait to get rid of.”

Now, perhaps I don’t understand this, but I think that Ms Johanson is suggesting first that Nancy Meyers, one of the few women to consistently write and direct films in mainstream Hollywood over a long period (I guess that Nora Ephron and Penny Marshall are the others concerned with comedies) is condescending to audiences by offering them enjoyable fantasies. Her crime is that the fantasies aren’t realistic? This is Hollywood we are talking about. Since when has a mainstream audience worried that a Hollywood comedy is not realistic? And as for kitchen porn, what is fundamentally wrong with drooling over expensive kitchens. Alright, the ostentatious wealth on display is something that bores me in Hollywood movies – but it has always been there. As one of the astute commentators on Johanson’s site points out, we don’t object that Katherine Hepburn is a wealthy socialite in Bringing Up Baby or that Myrna Loy and William Powell inhabit a world of wealth in the Thin Man series. That’s Hollywood.

The real question is what older women in the audience make of the film and how they identify with Jane’s dilemma (choosing between Jake and Adam or remaining celibate). Of course, I don’t know, but given Meryl Streep’s current fanbase post Mama Mia and the fact that in It‘s Complicated, she looks great without being lifted or filled in (there is a nice joke about this) and generally amuses, I’d be surprised if the film ‘missed’ with that particular demographic.

There is what I assume is an in-joke in the movie when Jane and Jake sit down with their children to watch a DVD for the first time since the marriage ended and the film Jake chooses is The Graduate. There are quite a few connotations/referents here. The Graduate involves a young man (Dustin Hoffman) sleeping with an ‘older woman’ – his fiancée’s mother (played by Anne Bancroft). In It’s Complicated, John Krasinki’s character is in the same familial relationship with Jane/Streep and he does have an interesting role in the narrative. At the time of The Graduate, Anne Bancroft was just 36. Hoffman was 30 and Katherine Ross, playing Mrs Robinson’s daughter was 27. So here was a highly-rated film in which a female star was ‘old’ enough to play the mother of an actor just nine years younger than she was. At least we have progressed now to the point where Meryl Streep at 60 can play a character who is described in the press notes as ‘fifty-something’. Finally, when Jane watches Hoffman in The Graduate, there is the further irony that Hoffman and Streep played a divorced couple in Kramer v. Kramer in 1979 (in which the divorced father attempts to bring up the child of the marriage – a question raised about Jake and his new wife and small boy). I’m sure Meyers was very conscious of these points when (I assume) she chose the movie extract.

I’ve not always been a Streep fan, but she’s turned into what once was called a ‘real trouper’, so good luck to her.

This entry was posted in Films by women, Hollywood, Romance. Bookmark the permalink.

2 responses to “Romcoms, Clooney and Streep, Audiences and Critics”