Francisco and Gabino (in the yellow hat)

Perpetuum Mobile was introduced as being the best film that programmer Neil Young had seen at the San Sebastian Festival in 2009. It has its moments but overall it lacked the intensity and the riveting cinematography of Fish Eyes (see the previous post) which it in some ways resembles. Set in Mexico City, but largely shot indoors or inside the central protagonist’s van, this is another observational and slight drama about a few days in the life of a family – son Gabino (in his twenties), mother and grandmother (who lives separately from the mother-son duo). There is also an older son Miguel who doesn’t live with his mother and brother. Gabino and his mate Francisco run a removals service but spend a fair amount of time playing basketball in the back of the removals van. Their work brings them into contact with couples possibly splitting up and singles being evicted. Gabino is duped at one point and dupes someone himself. That’s about as much as I can remember. The narrative ends with a different kind of tragedy than Fish Eyes.

This is director Nicolás Pereda’s second or possibly third feature. He’s 27 and based in Canada, getting funding from Canadian public funds. The 86 minute feature was shot on a low definition video format. Festivals being what they are, this film ended up on the big screen while Fish Eyes on high def was on the small screen. Perpetuum Mobile didn’t look too bad and in a couple of scenes – such as a driving sequence with considerable lens flare across the windscreen – it even felt like an aesthetic choice. The performances were OK and Young is justified in seeing the promise offered by a director who can create interest in seemingly mundane events. Again, there is little on the soundtrack other than dialogue. This passes the time and it’s certainly about real lives, but I think most audiences are going to want something more. The film is distributed by Ondamax Films – Latin American Cinema distributors. I don’t think that the film has a UK distribution deal. 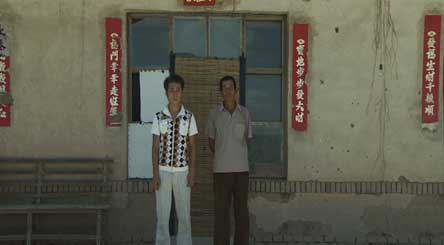 Son and father outside the house

A beautifully shot film in crisp high definition video, Fish Eyes (Yu Yan) is set in Inner Mongolia (i.e. Western China). An old man and his son (aged around 20?) live on the edge of the desert close to a large town. The old man grows sunflowers and operates a primitive truck stop post for the trucks visiting a water utility project. The son has no visible means of support and rides around on a motorbike, meeting other young men and taking part in petty crime. One day a young woman appears and the old man takes her in. She is seemingly mute and later the son uses her to pay off a debt (he has slept with the girlfriend of a local gangleader). Things take a predictable turn from this point, but there isn’t much plot and perhaps that’s the point. These lives are inconsequential – though there is tragedy. What events do occur are played out against a backdrop of occasional news stories about the Beijing Olympics and the Sichuan earthquake – stories about China that reach the outside world. The writer-director Zheng Wei (who also edited the film) is clearly making some kind of comment by including a large mirror, bought by the son, which when it is being moved creates rippling images across the screen. Later the mirror is broken by a motorcycle gang and we might possibly want to consider something about the image of China, created by a powerful centre, but fragile when exposed to contrary views?

The mysterious girl who turns up when the old man is fishing.

Zheng is Chinese, but he is a student at a university in Seoul and the rest of the crew seem to be Korean. The film was shot in 18 days on a budget of under $40,000 with non-professional actors. The images are remarkable. The camera is mostly static, but sometimes moving imperceptibly as if questioning the stability of the setting. The city, the old man’s house and the fields/desert are not particularly attractive, but the camera framings lend them a quality through good composition which means that we don’t mind watching intently. There is no music (apart from the plucking of an acoustic guitar which at the end of the film the father appears to bury) and precious little dialogue. When the violence comes it’s off-screen or the screen is darkened.

I’m not sure what to make of this. Is it sensible to see this work as allied to the concept of the ‘Sixth Generation’ of Chinese directors or has that gone now and been replaced by a simple split between ‘independent’ and ‘studio’ films in the Three Chinas? The setting and the behaviour of the son reminded me of the work of Jia Zhang Ke in films such as Unknown Pleasures (2002, China/Japan/France/South Korea), set in a similar industrial city in Northern China. But that film had a kind of romantic quality associated with the slacker sensibility of young men and the vitality of a young woman as a performer. Or perhaps Fish Eyes is similar to Blind Shaft (China/Germany/HK 2003) in its depiction of bleak towns in remote areas – although that film had a clear social commentary about the scandal of deaths in the mines. Or perhaps Fish Eyes represents something new – a relatively short film (75 mins but packed with meaning in its simple scenes). It’s well worth seeing. Distributed by Benten Films, an American company without a theatrical distribution record. They seem to have the film for UK and European as well as North American distribution, so look out for it – you won’t be disappointed (but be patient). The UK distribution seems to be organised via PIAS (UK) but I can’t find anything about it yet. 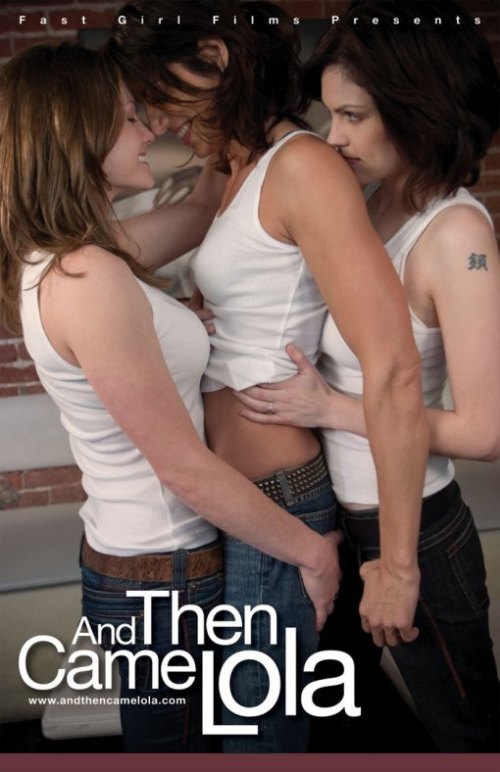 The poster shows Ashleigh Sumner (left, as Lola) and Jill Bennett (right, as Casey). Sandwiched between them is Cathy DeBuono (as Danielle). This poster was taken off the company’s Facebook site as too provocative in its display (see the film’s website)

The blurb on this film’s website announces it as: [a] “time-bending, sexy, lesbian romp, with an irreverent nod to the popular art-house classic Run, Lola, Run“. A pretty good description really. Lola (Ashleigh Sumner) is a photographer who has virtually no time left to deliver a set of prints to save her current partner Casey (Jill Bennett) from losing a design contract. The film shows three of Lola’s attempts to get across San Francisco, find the prints and deliver them to Casey at a bar where she is entertaining her client Danielle. In the process we learn about Lola’s love life and her circle and explore a range of sexy scenarios.

Clearly I’m not the target audience for the film, but judging from the laughter at the back of the cinema it was being understood and enjoyed by those who are. I’ve reviewed a number of lesbian features over the last couple of years and most of them haven’t offered any particular problems to straight male viewers. But I confess to being a little more wary of this one. Certainly the film is well shot and edited. It’s pacy and fun with good animation inserts and a strong soundtrack, some of which I quite liked (again it’s not my style of music). I gather that most of the cast and crew are ‘out’ and I wonder how to react to that in terms of American film and TV (it seems to be a big deal still). My problem is that while the lead actor, Ashley Sumner, came across simply as a strong performer with real screen presence, most of the other actors seemed to be playing lesbian ‘types’ and since I’m not exactly au fait with the nuances of lesbian iconography I’m not sure what to make of their performances. I guess I was a little put off by the characters of Casey and Danielle who seemed too close to the buffed types found in the ‘erotic thrillers’ that end up cut on cable TV.

The festival programme notes suggested that this ‘lighter’ play with the Lola rennt idea was more successful and more enjoyable than the original. I’m not sure about that. I liked Lola rennt a lot at the time (in 1998), but it was very much a film of its time, hugely important in re-introducing German Cinema to an international audience and offering a kind of pomo romp when that meant something. Choosing to parody it in 2009 seems simply a tongue in cheek gesture – a playful nod to all those porn re-workings of famous Hollywood titles perhaps? (The filmmakers, Ellen Seidler and Megan Siler claim Lola rennt as one of their favourite films.)  One of the bonuses of the film is that like the original and its scenes of Berlin, here we get to see bits of San Francisco – a city almost entirely populated by lesbians and gay men in the imagination of the filmmakers.

These lesbian films are destined for a life primarily on DVD and VOD and this one has been picked up for UK distribution by Peccadillo Pictures. It may have some more festival screenings in the UK, but the DVD is due out on May 24th. Well worth a look I think and the website is very good.