Aish and Rajni with a damaged hand from Chitti

Already quoted as the most expensive Indian film so far, Endhiran (the Tamil title – it is also dubbed into Hindi as Robot and Telugu as Robo) opens with something I’ve read about but not seen before – a credit for ‘Superstar Rajni’. Many (most?) South Indian stars have just the one name, but Rajnikanth doesn’t even bother with that. Promoted by his fans as India’s highest paid star, Rajnikanth plays opposite the Queen of Bollywood, Aishwarya Rai – who is of course equally at home in the South. She looks stunning throughout the film and she also looks like she’s having a wonderful time, pitching her performance perfectly so that it never topples into camp, but still radiates with her enjoyment.

Whatever anyone says about Rajnikanth, he sure works hard as he is on the screen for virtually the whole film and not just once but twice at the same time. The plot introduces us to Rajni as Dr. Vaseegaran, a scientist working in robotics who has produced a fully-functioning android robot, finished to look just like himself and named ‘Chitti’. ‘Vasee’ wants to present his robot to the Indian Army – to save the lives of those who might be killed on the battlefield. There is no suggestion as to how Vasee might have funded the years of work necessary to produce the robot – nor is there discussion of how much he might earn from the Army. This is a certain kind of Indian patriotism which reminded me of Mani Ratnam’s Roja and is referred to as ‘Tamil nativity’ by Indian film scholars. Two problems stand in Vasee’s way. He has neglected his girlfriend Sana (Aishwarya Rai) and his boss at the lab/research group, Dr. Bora is jealous. Bora (Danny Denzongpa) demands that Vasee improves Chitti’s intelligence so that he won’t attack people without reason – an interesting reference to Isaac Asimov’s ‘Three Laws of Robotics’. (The script for the film derived initially from work by the scientist and writer Sujatha who died just as the film was going into production.) As Vasee works on upgrading Chitti he succeeds in developing emotional responses in the robot – which inevitably means that he/it will fall for Sana. In the second half of the film Dr. Bora becomes more obviously the villain and in the final action scenes, Chitti is turned into a killing machine and duplicates himself many times in some amazing action scenes.

It’s hard to know where to begin evaluating a film like this. The cliché about Indian popular cinema is made flesh in the ‘masala movie’ – the ‘spice mixture’ of genre elements. Endhiran is the ultimate masala movie. There is romance (the scenes when Vasee is trying to win Sana back in the first third). There is science fiction with high-end visual effects, comedy is throughout and so is action. The songs and dances and are all there – and then there are the talking mosquitoes (!) and an animatronic baby shown in its ‘real’ mother’s womb.

To take the film on its own terms, I would argue that: 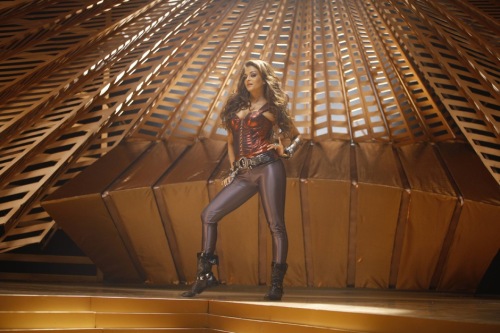 Aishwarya Rai in one of the set piece dances

Overall, credit is due to director S. Shankar and cinematographer R. Rathnavelu for producing a film which matches Hollywood for less than half the cost. The reported budget is Rs. 162 crores (1,620 million or $36.5 million). It also easily matches and possibly exceeds Bollywood (i.e. Hindi Cinema). Reliable box office figures are hard to come by in India and especially in Tamil Nadu. What we know so far is that this film has broken records everywhere in its home state and amongst the diaspora in the Gulf and Malaysia. It performed only modestly in the North being outgunned by the Bollywood release Anjana Anjani. But in the UK, Endhiran triumphed. On just 30 screens it made No 11 in the chart with a screen average of nearly £10,000 or three times more than most of the other top entries. In North America it was even more sensational, making No 12 with a screen average of nearly $24,000 on just 64 screens. The Telugu version, Robo, was also on 36 screens and made over $5,000 per screen. In both the US and the UK, Endhiran outscored the Bollywood release despite showing on less screens.

Film fans in the South are unique. Rajni is treated like a demigod. There are unconfirmed reports that tickets in Chennai multiplexes were exchanging hands at Rs 1,000 or Rs 1,500 ($30 or more) – the usual price is Rs 100 or less. Some Chennai cinemas opened at 4.30 am to accommodate crowds. Even in Dubai, screenings began at 7.30 am. We watched the Hindi-dubbed version in Bradford in a more or less empty cinema in the afternoon. I wish we could have seen it in London with a wild Tamil crowd.

I need to see it again to work through everything that happens: I’m particularly interested in Vasee’s temper and the way in which he ‘mistreats’ the robot. But I think I can safely say that anyone truly interested in global cinema should go and see this in the cinema. If this is still ‘regional cinema’ I’ll start talking to mosquitoes! The latest news is that Shankar is thinking of re-making 3 Idiots as a Tamil film. I wish he would consider instead adapting Chetan Bhagat’s 2 States which takes a Punjabi guy to Chennai in pursuit of the girl he wants to marry. That could really bring North and South together.

YouTube trailer (the quality of the trailer does not match the film) from Sun Network, the major South Indian media conglomerate that wholly financed the film: