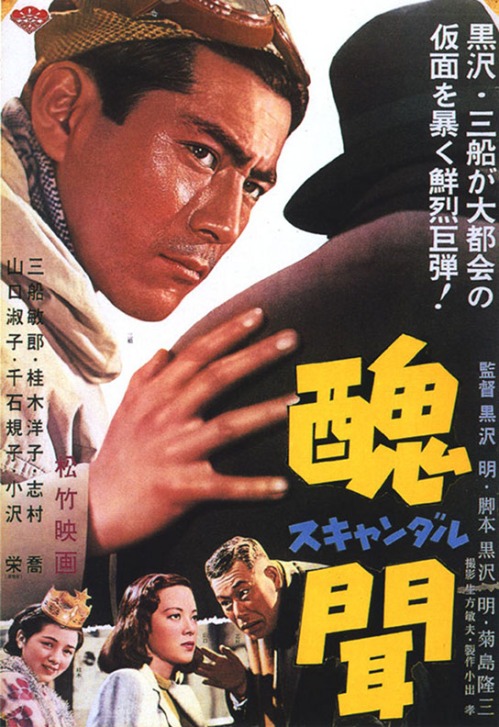 The Japanese poster for the film showing the four principals. The handsome Mifune Toshiro is the artist. Below are Shimura Takashi as the lawyer, Yamaguchi Yoshiko as the singer and Katsuragi Yoko as the sick girl.

For much of his career up to 1965 Kurosawa Akira was contracted to Toho (in the latter part of this period through his own production company) but in the late 1940s, because of labour unrest at Toho, Kurosawa took his projects to other studios. Scandal was produced by Shochiku, more associated for cinephiles with the work of Ozu Yasujiro. Although often regarded as one of Kurosawa’s ‘minor’ works, Scandal has several interesting features.

Mifune Toshiro plays Aoye Ichirô, an artist (Kurosawa’s ‘profession’ before he entered the film industry). Aoye is on holiday painting landscapes in the mountains. One day a young woman with a suitcase walks up to his painting spot. She appears to be heading for the hotel where Aoye is staying so he gives her a lift on his motorbike. At the hotel, Aoye visits the young woman’s room to see how she is settling in. Both are dressed informally and when they peer over the balcony to admire a view they hear a click – the paparazzi (or at least their predecessors in the Japanese ‘yellow press’) are at work. The young woman is a famous singer and there is a market value in an image of her and the handsome artist. Aoye then sues the scandal magazine (ironically titled ‘Amore’) which runs the photo. He chooses an unprepossessing lawyer to prosecute the case, seemingly won over by the lawyer’s sick daughter who is bed-ridden with TB. And this is where the problems begin . . .

Some critics see this film as failing because it moves into melodrama. Several of us on this site are melodrama fans, so that isn’t necessarily a bad thing. It must be said, however, that Scandal offers a rather unusual combination of elements. Kurosawa sets up an interesting proposition in the first few scenes. The artist paints a picture which is not a ‘faithful reproduction’ of a landscape – but it conveys a truth (which the artist eventually finds through hard work). The photograph at the centre of the ‘scandal’ is just the opposite – an accurate rendering of a moment, but ultimately ‘untruthful’ about what is happening. This ‘mismatch’ between ‘imitation of reality’ and the truth behind an image is carried through to Aoye’s relationship with the lawyer played by Shimura Takashi and with the lawyer’s sick daughter. These relationships become the focus of the melodrama (rather than the expected relationship with the singer).

Scandal is ostensibly a ‘social protest’ film about the ‘yellow press’ (what is now usually called the tabloid press). Because information and comment had been so severely repressed in the Japanese media during the long wartime period, there was an explosion of sensational journalism in the immediate post-war period. This was clearly a social issue. Exposure of corruption was, of course, a social good, but it was accompanied by exploitation of personal problems. Yoshimoto Mitsuhiro in his book on Kurosawa and Japanese Cinema (2000) observes that Kurosawa was early in critiquing this kind of journalism and it was not followed up in Japanese Cinema until Masumura Yasuzo’s Giants and Toys in 1958 (and again by Kurosawa in The Bad Sleep Well, 1960). But Scandal also has another reference to contemporary social problems. The lawyer is poor and his daughter is seriously ill with TB – just as the Mifune character in Drunken Angel (1948). The lawyer even lives in an area with a stagnant pool as in the earlier film.

The ‘media discourse’ which the film explores is well represented in the film’s mise en scène. Kurosawa and his cinematographer Ubukata Toshio have great fun with posters, microphones, flashbulbs, cine cameras and arclights in a series of montages and set pieces, such as the court case that comprises much of the last section of the film.

The problem with the film, I think, is in how Kurosawa has fashioned a narrative around the idea of a ‘true’ man and a ‘man of imitation’ – the Mifune-Shimura axis again played in a way that sees the artist character of Mifune puzzled by the new media environment and determined to preserve his honour (and that of the singer) whereas Shimura (the lawyer) is a much more feeble character who, although he does not understand the new world is easily persuaded to abandon his honour. This is a melodrama of redemption in which Shimura becomes the centre. (There is also a true melodrama ‘villain’ in the form of the magazine owner.) The court case is linked back to the ‘truth’/’imitation’ thematic in several ways. In the lawyer’s ramshackle office there is a photo of his daughter in school uniform. he artist recognises that this is a true photo and it helps him to decide to hire the father. The father knows this truth, so when he is about to do something shameful, he turns the photo to face the wall.

The expected melodrama involving the singer doesn’t happen, instead the focus switches to the lawyer’s daughter. The singer must be present for the court case and the narrative demands the presence of another woman – almost as a chaperone. This is the artist’s model and his friend. At one point, they discuss the conventions of Western painting and the artist suggests that Japanese art can’t deal with the nude. In this sense the artist is aware of the ‘westernisation’ of Japanese culture – and when he visits the lawyer’s family at Christmas he brings a tree on his motorbike.

I was struck by some of the American responses to the film (which has now appeared on DVD in Criterion’s box sets of Kurosawa). A New York Times review by Vincent Canby from 1980 suggests that the film is a satire on the Americanisation of Japan during the Occupation and that in some ways the film seems first like a pastiche of Hollywood romcoms and then undercuts this with its change of direction. Another reviewer points us towards Sam Fuller’s films about journalism. Yamaguchi Yoshiko (like Mifune, born in Manchuria) who plays the singer later appeared in some American films as ‘Shirley Yamaguchi’ – including Sam Fuller’s Japan-set thriller House of Bamboo (1955). The courtroom scenes are similar to those in Hollywood films, although the presence of newsreel cameras makes them look more like Senate hearings. There is a suggestion that some of the courtroom procedures might be ‘new’ – perhaps as a result of reforms by the Occupation forces?

This is certainly a film worth seeing, with some excellent set pieces and a real sense of the vitality found in so many of Kurosawa’s films in this period. Perhaps it has been overshadowed only because it was made in the same year as Rashomon. One warning though – if you don’t like melodrama acting, you may find Shimura’s performance just a little ‘too much’. I prefer him in Ikiru (1952).

This entry was posted in Japanese Cinema, Melodrama and tagged Kurosawa Akira. Bookmark the permalink.