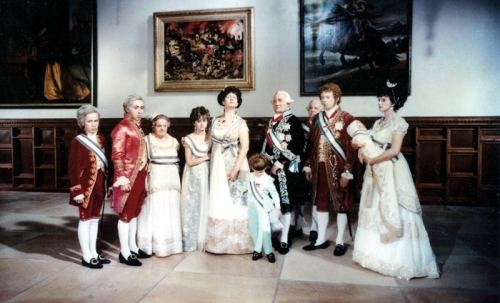 In one of the film's funniest sequences, Goya shuffles the line-up of the Spanish Royal Family for a famous (and satirical) painting.

The biggest treat for me and many others in this year’s festival was a rare chance to see one of the epic productions from Eastern Europe that competed with Hollywood’s international productions in the 1960s and 1970s. We were told that this was probably the first time that the film had been shown in the UK and that the print was probably one prepared for a screening in Paris at its time of release. The fact that it was a 70mm print in good condition was arguably the main attraction for festivalgoers on the Widescreen Weekend. There was only one slight problem. This print had German dialogue and French subtitles. My French and German are both too poor to deal with complex dialogue so I did miss some aspects of the plot – I’ve had to research the life of Francisco Goya in order to try to sort out some scenes. Though I felt slightly frustrated, this didn’t spoil my enjoyment of the film. I hear German slightly better than French, but I found myself blotting out the dialogue and reading the subtitles. I think that this shows how ‘institutionalised’ one can be in reading subtitles. I also noted that because I was reading a language I only dimly remember learning, I often couldn’t decipher the whole subtitle line before it had disappeared. This at least means that I can now appreciate the difficulty slow readers have with subtitles. The film did actually include some dubbing since two language versions (German and Russian) were produced and actors came from several countries.

Goya is a biopic of the Spanish painter (1746-1828) who straddled the final years of the tradition of the old masters and the birth of modern fine art. The full German title of the film is Goya – oder Der arge Weg der Erkenntnis, which translates as Goya – or the Hard Way to Enlightenment. This full title gives a clue to what marks this film out from the several other Goya biopics (a Spanish film appeared in the same year and the most recent film to feature Goya was Milos Forman’s Goya’s Ghost (2006)). Goya as envisioned in Eastern Europe was a figure who had created for himself a position of some importance as a ‘court painter’ to Spain’s ancien régime. But he was also a man of sexual appetite, a believer in the rights of his Spanish compatriots and a supremely talented artist eager to try new ideas and develop new techniques. It was inevitable that he would struggle in a situation in which ‘enlightenment’, embodied in the French philosophes of the late 18th century, would come to Spain, first peacefully but eventually via war and occupation. In the meantime, Goya and other liberal figures faced not only the protocols of court but also the terrible power of the ‘Spanish Inquisition’. Being labelled a heretic could lead to flogging, imprisonment and then exile – even for those who ‘abjured’.

Goya was one of ten films made at the great DEFA studio in Berlin in a 70mm format. The sheer scale and cost of the film required resources from across Eastern Europe and the Soviet Union. Yugoslavia stood in for Spain but a genuine Spanish musical group contributed to the score. The original cut was some 164 mins (with an interval) but this print was 134 mins and we watched it straight through. This is described as the ‘director’s cut’ in the DVD promotional material but there was discussion around this screening as to what actually prompted the decision to cut the film. The popular theory was that because the film was quite complicated in terms of narrative, the cuts were made because there was a danger of audience alienation. This is interesting because in my experience cutting often makes a narrative more, not less, opaque.

The film was introduced by Wolfram Hanneman (see his introduction here) who told us we would find the film ‘difficult’ even without the language issues. I didn’t really take this on board at the time, but when I researched Goya’s life afterwards I realised that the film was non-linear in its presentation of events. Since the juxtaposition of scenes still made sense in terms of revealing Goya’s ‘path to enlightenment’, this didn’t bother me too much. I don’t really have any strong feelings about 70mm (the main interest for much of the audience) and I can’t really comment on the quality of the print, except that it seemed in pretty good nick. The production was indeed epic and there was plenty of visual feasting unencumbered by language difficulties. The remarkable set pieces around the procedures of the Spanish Inquisition work very well and, as Keith remarked afterwards, this is a biopic of an artist that really does seem to say something about creativity and the artistic process. DEFA employed a small army of illustrators and artists to copy Goya’s paintings at different stages of development. 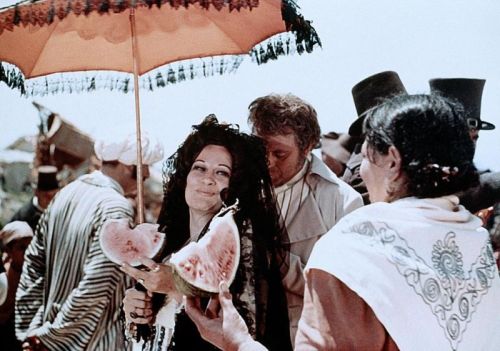 Goya (Donatas Banionis) with The Duchess of Alba (the Yugoslav actress, Olivera Katarina)

The other major interest in the film is Konrad Wolf as director and Donatas Banionis as Goya. The Lithuanian actor Banionis is the cosmonaut in Solaris and I thought he was terrific as Goya (he also played Beethoven in another DEFA biopic). Wolf (1925-1982) is controversial as a German Jew who fled with his communist family to Moscow in the 1930s and was educated and trained in the Soviet Union before returning to Berlin to work at DEFA. Despite his high status within DEFA there must have been some concern that Wolf was pro-Soviet, although others thought that he had liberal tendencies. I found it difficult to discern any authorial thumbprints on the Goya story that might hint at ideological sub-texts. The film was an adaptation of a novel by Lion Feuchtwanger and Wolf shared screenplay credit with the Bulgarian Angel Vargenshtain. This isn’t my field but perhaps someone would like to comment on Wolf’s political views?

A Region 1 DVD of the film with a slightly cropped image is available on Amazon and I’m told some of the extras are interesting. It’ll have to go on my long list of movies to acquire so that I can re-watch it with English subs.