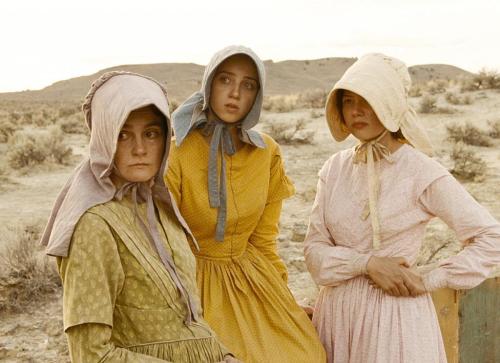 Shirley Henderson, Zoe Kazan and Michelle Williams as the three women on the trail

Beauty is suddenly back in the cinema. Following Norwegian Wood this is another film to invite the audience to experience the beauty of landscape. This is a harsh beauty in terms of its inhospitable face presented to travellers, but the magical light of early morning and evening sun is breathtaking – reminding us of films with similar settings (although in different landscapes) such as Terrence Malick’s Days of Heaven.

Kelly Reichardt’s film (she co-wrote, directed and edited Meek’s Cutoff) recounts a journey by hopeful settlers across the wild country of the Cascades in Oregon territory during the 1840s. Three couples have hired a guide with local knowledge called Stephen Meek to take them on a route that will shortcut the main Oregon trail – thus Meek’s ‘cutoff’. Other than a boy, who is the son of one couple, and their oxen and horses, this is the totality of the party – until they come across a lone Cayuse ‘Indian’. At this point they fear that they are lost and they are suspicious of Meek’s ability to get them through this country. Emily Tetherow  (Michelle Williams) is particularly assertive within the group and her contempt for Meek and his reaction to the Cayuse becomes an important narrative element.

The print I saw was digital and the detail of the image was at times breathtaking. In one early scene a character leans forward towards the camera to fill a water container and the effect is almost 3D-like. I felt that I could reach out and put my hand in the water. It was only later that I realised how important that water was going to be in the narrative. This high level of visual realism is framed in Academy ratio (1:1.33). An unusual choice in modern cinema and Reichardt has explained that it represents the restricted view of the female characters – i.e. from beneath their bonnets. This is an interesting idea and it certainly serves to mark a difference from the films which have presented the Western landscape in CinemaScope since the mid-1950s (as well as the earlier Fox Grandeur widescreen The Big Trail from 1930 – one of the first representations of the wagon trains on the Oregon trail). Academy means vertical compositions and a feeling of containment rather than the ‘open-ness’ of ‘Scope. Two technical issues raised questions for me. The first was simply to wonder how multiplexes have got on projecting the film since I remember seeing Academy prints of classic films which had been ‘topped and tailed’ to fit onto the 1:1.85 screen in many cinemas. (Most good independent cinemas are properly prepared to show Academy ratios.) The second was to query the sound design. I had some problems with the dialogue and the directionality of some of the sound effects – as if the Academy ratio was a problem with stereo sound design. Has anyone else experienced this? 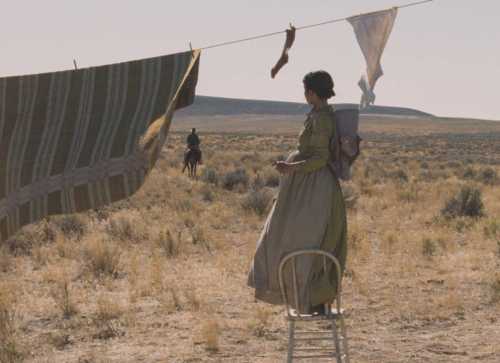 This classic Western composition resembles the opening of Ford's The Searchers when Martha watches Ethan riding in the distance.

Ford's imagery in The Searchers presents the iconic landscape of Monument Valley in a widescreen frame (VistaVision). In both these images the woman is visually in the 'home' and the man is in the landscape. Reichardt can't alter this spatial arrangement easily (the women don't ride), but she can frame the action in the domestic space so that the women are less marginalised.

As to the film’s narrative, I’ve read that Reichardt and her collaborators were not particularly familiar with previous films on the same topic. (See the Sight and Sound coverage (May 2011). The film was motivated more by Reichardt’s discovery of the landscape when she was researching an earlier film – and by her co-writer Jon Raymond’s research into the local history of the region which turned up the Meek character. But Reichardt certainly was aware of the ways in which Westerns have traditionally marginalised women and her focus on the three women working together is clear. In some ways however I think that film pushes more towards allegory than social history. It made me re-think my own experience of watching Westerns and why I didn’t more forcefully resist the casual sexism and more blatant racism of so many Western narratives. In a typically solid summary of women’s roles in Westerns by Ed Buscombe (in the same issue of Sight and Sound), he mentions both Ford’s Wagonmaster and the TV series Wagon Train which I watched regularly in the 1950s. As Buscombe points out, the series format and the need for new narrative material meant that the TV representations of the wagon train were more likely to feature domestic scenes and it is interesting to see how Reichardt’s vision makes the collecting of kindling, cooking, sewing etc. much more realistic and much more part of the trail experience. The framings also emphasise this with the women often in central positions when the group is viewed in relation to the landscape (i.e. when they are discussing which way to go). Her women are clearly part of the survival discourse of the film and the interaction between Emily and the Cayuse demonstrates this. She is repelled by his stench, but she mends his moccasin. She explains this as a pragmatic decision but it is also suggestive of her humanity, her compassion and perhaps her sense of justice because of the way he is being treated by Meek. Jon Raymond refers to Cormac McCarthy’s novel Blood Meridian as an inspiration and I can see that in some of the interactions between characters and with the landscape.

I suspect that some audiences will struggle with the film, partly because of the otherness of its look but mainly because of its narrative. In the goal-orientated fictional worlds of Hollywood, the ‘end is always in sight’ but Reichardt is much more interested in the journey itself. But I thoroughly enjoyed the film. I hope she either makes another Western or that she has inspired others to explore similar territory. More please!

Here is the film’s trailer illustrating some of the points presented above:

This entry was posted in American Independents, Films by women and tagged Western genre. Bookmark the permalink.