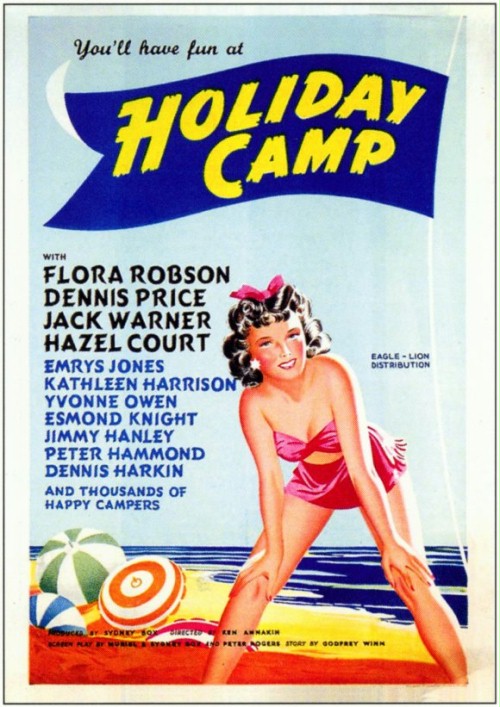 1947 was the year after the high point of cinema attendance in the UK and arguably the highest ever admissions figures per head anywhere. A UK population of around 50 million clocked up over 1.5 billion admissions – that’s over 30 visits per year for every man, woman and child. Holiday Camp was one of the most popular films of the year so it stands as an important document in terms of a shared experience of filmgoing if nothing else. Perhaps because it led to a later series of comedy films about the adventures of a working-class family, ‘The Huggetts’, it has been overlooked as an important social document of its period. Just like the later ‘Carry On’ series in the 1950s and 1960s it provides study material for the changing mores of British society.

This first film featuring the Huggetts was produced by Sydney Box at Gainsborough, one of the most successful British studios during the war and in the immediate post-war years. (But Gainsborough was shut down by Rank in 1951 as part of the company’s re-organisation). From an idea by Godfrey Winn and written by Sydney and Muriel Box with Peter Rogers (who went on to produce the Carry On films), Holiday Camp was also a first feature for director Ken Annakin, then a young man from East Yorkshire who must have known about the film’s main location.

The film was shot on location at Butlin’s Filey Holiday Camp with interiors at Gainsborough’s Lime Grove studios in London. Filey, on the Yorkshire Coast south of Scarborough, had a newly-built camp that was taken over by the RAF early in the war. When it opened in 1945 the new camp began to attract large numbers and had its own railway station. From the 1930s through to the 1960s, holiday camps were very popular offering an inexpensive holiday for families and groups of young people. Accommodation was in chalets and all catering and entertainment was on site and included in the price. The film offers a number of interlinked stories featuring the members of the Huggetts family and some of the other characters they meet.

The film begins with the arrival of the ‘holiday special’ train at the camp’s own railway station. I was immediately struck by the similarity to the opening of another Gainsborough Picture Millions Like Us (UK 1943) in which young women from all over the country arrive at a hostel where they are billeted in pairs for the duration of their training and subsequent factory work making aircraft parts. The star of that film, Patricia Roc, makes a fleeting celebrity appearance in Holiday Camp as herself judging the camp beauty contest. Arriving by train at a camp also has much darker connotations of course and although these aren’t raised in the film, references to wartime and austerity are never too far away. The young Huggett boy (Harry) finds himself in a chalet with a young sailor (Jimmy Hanley) who has just been jilted and who reacts by making himself ill eating all the chocolate bars he had saved for his girlfriend. Rationing was central to people’s lives at this point and the ‘waste’ of food in this way was shocking. Fortunately the sailor meets the Hugget’s daughter Joan (Hazel Court) who was widowed in the war and has a small boy who seems to disappear conveniently (the camps provided baby-sitting services). ‘Ma and Pa’ Huggett are played by Kathleen Harrison and Jack Warner. Though their banter is mainly played for laughs they are also allowed a poignant scene on a cliff-top.

Flora Robson appears in her traditional role as Esther, a spinster who becomes involved in ‘saving’ a young middle-class couple who find themselves ‘in trouble’. He is a would be great musician who is playing the piano in a camp ballroom and she is a genteel impoverished girl living with her stern aunt (Beatrice Varley) who has come to the camp to be with him. Robson has loved and lost as a young woman in the 1914-18 War and she is deeply disturbed by the ever-present voice over the tannoy giving camp announcements – giving rise to a comment about being in a prisoner-of-war camp. Is this the voice of the man she lost? The announcer is played by Esmond Knight who in 1947 also joined Robson in the cast for Powell and Pressburger’s Black Narcissus. The meeting between Esther and the announcer ends with an interesting sequence in which we see the camp’s mass parade – a celebration of the collectivist spirit that is often represented in the wartime propaganda films such as Millions Like Us. Esmond Knight’s speech in this sequence makes me think of the J. B. Priestley adaptation They Came to a City (1945). The parade sequence is one of several shot in Filey (the camp in the film is called ‘Farleigh’ – I’m not sure if this was intended as a joke about an affected pronunciation) which are blended into the studio scenes quite well.

The final major character is played by Dennis Price, like Robson somewhat typecast, as a ‘bad egg’ – clearly masquerading as a Squadron Leader but with a hard edge that occasionally comes to the surface. This is a familiar character from the period along with the two card sharps but overall I thought that this was the weakest narrative thread and its eventual outcome unbalanced the closing of the film. Although billed as a comedy, Holiday Camp is perhaps better described as a comedy drama. It’s not difficult to see why the producers decided to spin-off ‘The Huggetts’ for later films and a radio series, but their family adventures are only part of what Holiday Camp has to offer. In some ways its mix of elements prefigures the successful soaps on British TV from the 1960s.

For the mass audience of the time Holiday Camp was certainly a star-studded affair. As well as the main cast, the film includes Charlie Chester as himself on stage in the camp theatre and Gary Wilmott, again as himself, as compere of the beauty contest. Future stars are in small roles such as Susan Shaw as the girl who wins Harry and Alfie Bass as a ‘red coat’. The 15 year-old Diana Dors is in the background of one scene making a strong impression on the dancefloor.

Holiday Camp is being screened in Filey on September 23rd as part of a festival of ‘Made in Yorkshire Films’.

The opening of the film: