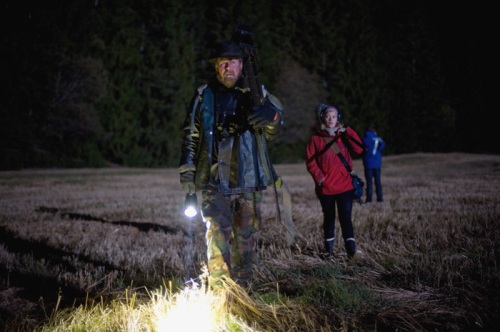 Otto Jespersen as the hunter with Johanna Mørck & Glenn Erland Tosterud as two of the three students. Photo courtesy of Magnet Releasing.

We’re off to Norway this week for a few days, so what could be better preparation than a Norwegian film currently generating much goodwill internationally? The Troll Hunter is a ‘creature feature’ that doubles as a satire about aspects of Norwegian culture on several levels – and it is hugely entertaining.

This film has been described as a ‘mockumentary’ but that doesn’t feel right to me. I don’t like the ‘mock’ suggestion. The Troll Hunter is presented as a ‘serious’ story (although there is plenty of humour as well) which uses the ‘found footage’ premise underpinning films like The Blair Witch Project. I didn’t really fancy this idea at first but I soon forgot about the premise as writer-director André Øvredal focuses on the story and doesn’t feel the need to remind us of the fact that it is supposed to be a student film project every minute. The shoot used Panasonic’s AJ-HPX3700 Varicam in order to get the best coverage of night-time events (which take up much of the narrative) and to replicate the look of the kind of digital camera that film students might use on a project like this. According to the Press Notes the dialogue and actions in each scene were improvised to retain the documentary feel (although the script gave detailed outlines of what would happen). The handheld work is pretty smoothly done so after a while you tend to forget about the conceit and focus on the story.

The story begins with a trio of student filmmakers, Thomas, Joanna and Kalle, who decide to investigate a mysterious local man who is suspected as a poacher of bears. Doggedly they pursue the man and one night they follow him into a forest in the hills where they witness his real work – hunting trolls. After initially telling the students to get lost, the troll hunter eventually invites them to join him on the hunt on condition that they do exactly what he tells them without any argument. You can imagine what that leads to.

The great thing about The Troll Hunter is that it is a genuinely interesting story that explores the possibility that trolls actually exist and that the Scandinavian authorities attempt to keep the troll’s presence in the mountains and forests secret. This policy then requires a hunter to ‘manage’ the troll population and several other government personnel to ‘cover up’ whenever troll behaviour threatens to become generally known. In this scenario it isn’t surprising that the troll hunter becomes disillusioned about the way he is treated and that some of the ‘cover-ups’ are poorly executed. In a neat touch we see the troll hunter filling in a ‘Slayed Troll’ Report Form over his breakfast.

The script is very good in explaining how trolls live, what they eat and what happens when they die. Trolls are deeply embedded in Norwegian folk culture and Øvredal offers four very different creatures from the gregarious ‘Mountain Kings’ living in caves to the 200 foot tall ‘Jotnar’ roaming the most remote mountains. All four types are humanoid in appearance, moving as bi-peds, but with various ‘distorted’ features – and they don’t like Christians. This religious intolerance is well worked into the narrative. The giant troll is the most spectacular, reviving memories of Japanese monster movies and American exploitation films like Attack of the 50 foot Woman. To my untutored eye the trolls look pretty good in terms of effects. However, it’s the human characters who drive the narrative and Otto Jesperson as the hunter is terrific. He’s a famous comedian in Norway and he plays his role to perfection. There is also a nice little cameo from Robert Stoltenberg as a bogus Polish trader who supplies the Norwegian authorities with a bear carcase for their cover-up. I wonder what Poles think about the ways in which their national stereotype turns up in other European stories?

The Troll Hunter was very popular in Norway last year and is currently on release in several territories. An IMdb user from Norway worries that it is ‘too Norwegian’ but that seems to me to be one of its most important features and it joins the small but growing list of domestic popular genre films that could be described as ‘global’ in appeal. The dreaded US remake is already on the cards, so make sure that you see this version first.

One response to “The Troll Hunter (Trolljegeren Norway 2010)”