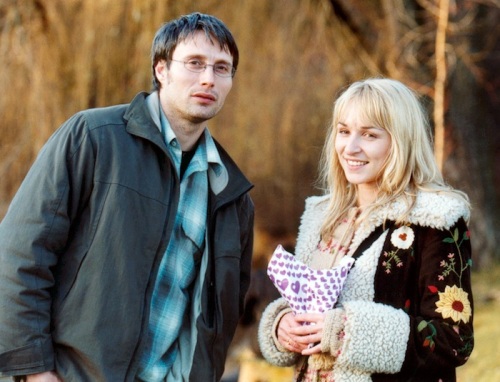 I’m looking forward to seeing Thomas Vinterberg’s The Hunt, a festival prizewinner starring Mads Mikkelsen. It’s Mikkelsen’s second major performance of the year, following A Royal Affair, one of my top films released in the UK in 2012. Vinterberg has not really had a success in the UK since Festen back in 1998. I confess that I haven’t seen the films that he made during the 2000s but the arrival of The Hunt has prompted me to go back and review the impact of the Dogme movement led by Vinterberg and Lars von Trier. I want to consider what it means 15 years on from the first Dogme film and how much it has influenced the current resurgence of Danish film and TV.

Festen was officially ‘Dogme #1’ – the first title to receive the certificate used as a title card for each Dogme film. Open Hearts was ‘Dogme #28’. According to this useful Dogme ’95 page, the certificates were dropped after ‘Dogme #31’ in the same year – but the same website lists another 70 or so films that claim to be following the ‘Vow of Chastity’ conjured up by von Trier and Vinterberg in 1995 – the internationally celebrated centenary of the cinema. Whether or not filmmaking needed to be ‘re-invented’, von Trier and Vinterberg spoke some sense amongst the blather with which they promoted their Dogme idea. They managed to make the whole Dogme debate into one which encouraged lots of further discussion and inspired dozens of low-budget filmmakers, many of them first-time directors. They also made, with their Danish colleagues, several entertaining and interesting films. Crucially, they also put Denmark, one of the pioneers in filmmaking in the 1910s, back on the international map and opened up opportunities for Danish writers, directors and actors.

Open Hearts is interesting for several reasons. It stars Mads Mikkelsen and was directed by Susanne Bier. Already a successful director in Denmark with The One and Only (1999), Bier has gone on to make several prize-winning films that have captured the attention of specialised cinema audiences worldwide. Keith has written about In a Better World (Haeven), which won the Best Foreign language Oscar in 2011, and I know that Rona is a fan. In this 2002 film Susanne Bier approaches a Dogme project much as Lone Scherfig did in Italian for Beginners (2000). Scherfig’s film turned out like a kind of romcom and Open Hearts has a similar generic familiarity without resorting to obvious genre formulas. The frame is 1:1.37, the camerawork is handheld and presented in clear sharp images – apart from the occasional night-time shot where the grain shows without powerful lighting. The film actually opens with a double Dogme conceit. The Vow of Chastity forbids ‘optical effects’, so Bier uses an infra-red camera to track through a city centre at night. At the same time, we hear seemingly non-diegetic music – another forbidden choice in a Dogme film. But then we realise that the young woman we see in the first shot filmed without infra-red is actually listening to an MP3 player through earphones. Following this little ‘play’ with the rules, the ensuing drama sticks close to the Dogme idea and delivers a riveting domestic drama, a form of realist melodrama. (There is one rule that is broken though – Bier occasionally uses a Super 8mm camera to show what characters might be thinking about in the middle of a conversation.)

The young woman in the opening sequence is Cecilie (Sonja Richter) who is about to meet her fiancé Joachim (Nikolaj Lie Kaas – currently playing Sarah Lund’s partner in The Killing 3). She’s a restaurant chef and he’s a postgraduate student about to set off on another exciting overseas field trip. After a night of passion she drives him to his departure point where a terrible accident occurs and he is seriously injured – and paralysed from the neck down. The woman responsible for the accident is Marie (Paprika Steen) and in classic melodrama coincidence, her husband Niels (Mikkelsen) is a surgeon at the hospital where Joachim is taken. Niels finds himself comforting Cecilie – and falling for her. Desperate to help Nikolaj, Cecilie finds herself rejected as he tries to come to terms with what has happened. I won’t spoil more of the plot – it should be clear from just this brief outline that the drama has lots of possibilities, especially when we realise that the young teenage daughter of Marie and Niels also has a role to play in a developing family melodrama. There is a neat conflation of several familiar narratives – the whirlwind romance in unusual circumstances, the marriage drama and, slightly less familiar, the ‘facing quadriplegia’ drama (cf The Sea Inside).

The Dogme approach in one sense ‘reduces’ cinema since it bans a whole range of cinematic devices. On the other hand it enhances the most important features – a tightly-written script and the direction of actors. The results can be, as they are here, raw and powerful emotions with a high degree of credibility. There are relatively few locations and no use of ‘special’ mise en scène ideas – though audiences can certainly ‘read’ symbolism into decisions to locate scenes in, for example, a kitchen or a furniture store.. Everything rests on what the actors say to each other and how they say it. ‘Realist melodrama’ of this kind is often startling because it seems to signify ‘honesty’/’authenticity’ – i.e. it constructs these concepts using just script, performance and basic camera operations. This ‘honesty’ is both shocking and sometimes very funny in a dark way. This is exemplified by a sequence in which Joachim in his angry reaction to his situation and his concern about Cecilie’s love, turns on the older nurse who has been assigned to his personal care. He uses the most obscene and personally offensive language he can think of, but later we see further exchanges which suggest that she gives as good as she gets and that Joachim is becoming less aggressive. (The nurse is played by Birthe Neumann, the mother from Festen.) The script is by Anders Thomas Jensen, who is now one of the leading scriptwriters in Denmark. In 2002 he already had two Dogme films to his name and since then he has worked extensively with Susanne Bier as well as on Lars von Trier projects.

I enjoyed Open Hearts very much and I recommend it as an antidote to sentimental Hollywood films with some of the same ingredients. Susanne Bier was already an established director when she made Open Hearts, so this shows that the Dogme approach is something that isn’t just good for relatively new directors, but that it can add something to the work of experienced directors as well. I think that in this case, the simplicity of the Dogme approach highlights the acting talent in Denmark as well as the strong script and excellent direction.

Some more Susanne Bier films to follow, I hope, and then The Hunt.

Useful analysis of the film’s narrative and form. (Beware that this includes more spoilers than the outline above.)