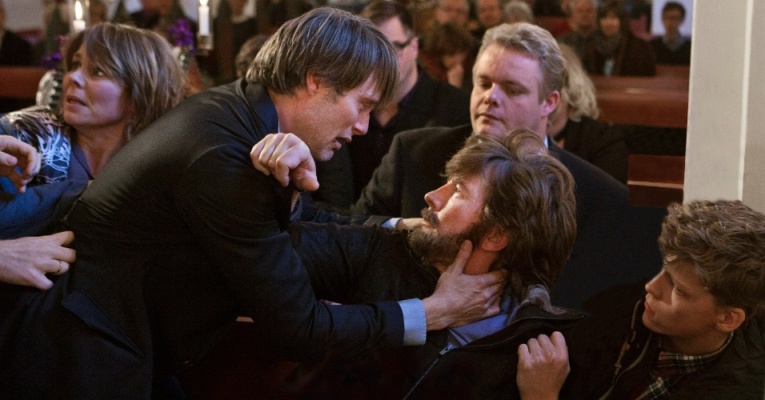 It tells you something about contemporary film culture when Amour is a major UK release by Artificial Eye, furiously promoted and garlanded with awards and The Hunt, also a Cannes prizewinner in 2012, sneaks out on a much more limited release from a smaller distributor which seems to have done little to maximise its cinema box office. It’s not easy to find The Hunt, but you should look out for it as one of the films of the year.  Its Cannes prize was for Mads Mikkelsen as Best Actor and he was certainly a deserving winner. With his other stellar performance in A Royal Affair earlier this year, he is perhaps the leading European actor at the moment. Yet The Hunt is not a one man show. Everything about this film is first class. It begins with the script by Tobias Lindholm (who also writes for Borgen) based on a story by the director Thomas Vinterberg and runs through the direction of a fine ensemble cast and a remarkable performance by Annika Wedderkop (as the young child at the centre of the narrative) to the cinematography of Charlotte Bruus Christensen and indeed all the other technical credits.

In some ways, The Hunt is related to Vinterberg’s first international feature, Festen – the first Dogme film in 1998. The Hunt isn’t a Dogme film, though some of the vitality of the hand-held camerawork is still evident. The Hunt is much more ‘composed’ and it uses landscape and mise en scène in more expressive ways. In thematic terms, however, it does resemble Festen in suggesting a dark undercurrent in Danish social life. Festen was about the machinations of a wealthy family whereas The Hunt is a melodrama about a small community. The Hunt also moves beyond the ‘realism’ of Festen to explore a community in the forest which somewhere beneath the surface suggests a link to a traditional, almost fairytale world. This is an absorbing and enthralling example of storytelling at its best.

Vinterberg has said in interviews that the title ‘The Hunt’ is ‘banal’ but it is actually very clever in its multiple references. The narrative more or less begins and ends with a hunt by the local men of a small community somewhere in a Danish forest. (Not sure about Denmark, but in the UK the old French word forêt refers to an area in which the king hunted.) When a local youth reaches a certain age he is granted a shooting licence and has the privilege of shooting the first deer of the hunt. This ancient tradition forms part of the contradiction/contrast of liberal/modern and conservative/traditional in this community.

Lucas (Mads Mikkelsen) is in one sense part of the traditional world as a hunter, but also both part of the modern world as a teacher who is a victim of education re-organisation. He has lost his job after the closure of the local comprehensive school and he has been transferred to the kindergarten/nursery school. (We don’t know the reason for the school closure – perhaps it is a case of falling pupil numbers, but Vinterberg is careful to show a diverse community suggesting new arrivals.) But when his innocent friendly behaviour is misunderstood by a young child, Lucas becomes the hunted – assumed by even his closest friends to be a dangerous man who must be shunned and punished. References have been made to all the well-known ‘witch hunt’ films from Frankenstein through to The Crucible. This is a rural community in which we see only four communal meeting places – the nursery school, the supermarket, the church and the country club/hunting lodge – which though it is a private house seems also to be the centre for social activity. It’s interesting that Lucas is effectively ‘barred’ or at least unwelcome in the first three but that the last is a kind of haven. We don’t hear the back story which would explain how Lucas became close friends with the owner and his family, so that Markus, Lucas’s son has a godfather in the community.

It isn’t difficult to make visual connections between the village/town in this film and that in countless other films, including many Hollywood films. The script plays with gender roles and genre elements so that Lucas is a character who is divorced from his wife (who we never see – she remains a voice at the end of a phone) with whom he tussles for custody of his teenage son. The accusation is that he has behaved inappropriately with a young girl so that his accuser becomes the older woman in charge of the nursery. Not surprisingly, the mother of the child (and the wife of his best friend) turns on him immediately. The only woman who is, at least initially, sympathetic is Nadja, a migrant worker – an ‘incomer’ to the closed community – played by the Swedish actress Alexandra Rapaport. The men of the community are pushed into macho roles and the thuggish behaviour of the male staff in the supermarket is reminiscent of the builders in Peckinpah’s Straw Dogs. The casting of Daniel Engstrup, a very tall and beefy actor, enables Vinterberg to organise scenes that remind us of Westerns – in which the lone hero is menaced by groups of physically strong men. But Vinterberg also undercuts this by first presenting the ‘hunters’ as flabby city types reluctant to skinny dip in the local lake in an annual ritual.

There is no doubt that, carefully crafted though the script and direction might be, it is the star image and acting prowess of Mads Mikkelsen that gives The Hunt its edge. Voted ‘the sexiest man in Denmark’ by a woman’s magazine, Mikkelsen’s strong star image combines a rugged and nonchalant masculinity with a sense of vulnerability. There is a similar mix of ‘laddishness’, intelligence and ‘attitude’. Visually these qualities are emphasised or downplayed mainly by altering hairstyles, stubble and dress, but also by the use of spectacles. In the Hunt, Mikkelsen is almost boyish with the floppy hair and delicate specs – again a reminder of the bookish David (Dustin Hoffman) in Straw Dogs. The way in which Mikkelsen as Lucas is beaten up by the men is also reminiscent of the beatings experienced by a young Clint Eastwood in Fistful of Dollars. But though there is a strong resemblance to Hollywood movies, the key sequence which perhaps emphasises ‘difference’ involves a trip to the supermarket when Lucas is confronted by the male group determined to keep him out. The script here presents a much more carefully thought through response rather than the explosion of violence that Hollywood might offer us.

If my analysis has suggested that The Hunt is straightforward in its narrative about the hunters and the hunted, I should stress that it is anything but. The narrative is seemingly ‘resolved’ but then continues with an epilogue a year later which raises questions again about ‘hunter’ an ‘hunted’ and puts some doubts in our minds about what we have seen. The film is indeed ‘open-ended’ and therefore potentially disturbing. It’s a must-see and stands up well to repeated viewings.