The National Media Museum’s banner for its exhibition (designer unknown)

I thought it was appropriate to celebrate the 900th posting on this blog with a nod towards a 100 years of Indian Cinema. The first Indian feature film  (i.e. a film made by an Indian in India) is usually quoted as Dadasaheb Phalke’s Raja Harishchandra released in May 1913. There are of course many celebrations planned and I’m grateful to Omar Ahmed for pointing me towards the official Indian film website at indiancinema100.in 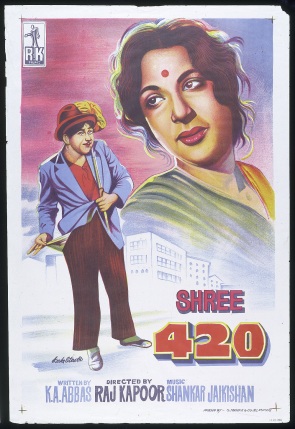 Raj Kapoor’s 1955 film ‘Shree 420’ features his Charlie Chaplin-type character. (This image is from the Victoria & Albert Collection – similar Raj Kapoor posters are in the NMeM exhibition)

In Bradford, the National Media Museum has opened an exhibition of Indian film posters and there is a strand of the upcoming 19th Bradford International Film Festival in April featuring several archive titles and UK premieres of Indian films. In addition, the latest issue of Sight and Sound (April 2013) carries an article on film posters titled ‘Indian Ink’ (groan!) by Divia Patel. I’ll preview BIFF later this week but here I want to comment briefly on ‘Bollywood Icons: 100 Years of Indian Cinema‘, the poster exhibition in Gallery 2 at the National Media Museum. The exhibition comprises posters from the museum’s own collection plus others from collectors including guest curator Irna Qureshi the local writer and scholar who has written a background paper to the exhibition, ‘Decoding the Bollywood Poster’ – downloadable via the website link above. Ms Qureshi also writes an interesting blog about “the influence of Bollywood films on her British Muslim upbringing in Bradford”. She has recently presented a series of screenings of modern Bollywood classics at the museum. Entry to the exhibition is free and it runs until June 16. The number of posters in the exhibition is quite small but each poster is itself a work of art and I didn’t have long enough between film screenings to do it full justice. Here are just a few quick impressions – I intend to go back later. The main organising principle appears to be important dynastic system which has created and sustained the major stars. The great dynasty of Hindi cinema is the one founded by the theatre actor-producer Prithviraj Kapoor, active first in the silent cinema of India, whose son Raj Kapoor became the great star of 1950s Bombay cinema. The sons of Raj Kapoor, Randhir, Ranjiv and Rishi were stars in the 1970s and 1980s and their children, Karisma and Kareena (Randhir’s daughters) and Ranbir, son of Rishi, are stars today. The Bachchan family (Amitabh and Jaya Bhaduri , their son Abhishek and his wife Aishwarya Rai) made its mark in the 1970s and has been active ever since. The exhibition also offers ‘outsiders’ like ‘Fearless Nadia’ the Australian woman who became a star of ‘stunt films’ in the 1940s and the contemporary star Shahrukh Khan.

Visually what is most interesting is the shift from the drawn/painted images of the 1940s/50s to the photographic images of today – but within that span, also the contrast between the restrained colours and graphics of the auteur-driven films of the studio period (see the Guru Dutt poster) and the much more ‘violent’ colours of the ‘angry young men films of the 1970s (e.g. those featuring a young Amitabh Bachchan).

As Irna Qureshi points out in her guide, the posters of the studio period of Hindi cinema offer little in the way of text or tagline because of attempts to appeal to an ‘All India’ audience. In the poster for Kagaz Ke Phool (Paper Flowers) here, there is text in both Hindi and Urdu (which though they use similar vocabularies are expressed in different scripts) and English. By the time of Sholay in 1973 this practice had clearly changed – though it continued for other types of films and audiences. Posters up until the 1990s were usually drawn or painted by contracted artists before photographic images became dominant. In the contrast between Guru Dutt-Waheeda Rehman and Amitabh Bachchan-Jaya Bhaduri the difference in genre emphasis from romance melodrama to action adventure-romance is clearly signalled in the graphic style. Also contained within this contrast is the evolution of the audience appeal. Both the 1950s Bombay cinema and the 1970s ‘angry young men’ appealed to all classes across India but the younger audience is addressed more clearly in the 1970s.

In the 1960s and 1970s as Indian art cinema and parallel cinema developed, the presentation of these new films shifted the address – only slightly, but distinctively. I can’t remember if the Bradford exhibition includes any examples, but the Sight and Sound article usefully includes an example of Satyajit Ray’s own graphics work on the poster for Charulata (1964). Also in the S&S piece is an image of the poster for Goutam Ghose’s Paar (1984) a stark representation of a parallel film about the oppression of villagers by a brutal landlord. Since the start of the 1990s when ‘Bollywood’ began to replace the general descriptions of ‘Hindi popular cinema’ or ‘Bombay cinema’, audience address has changed in many ways. Most significantly, the major Bollywood productions have begun to move away from attempts to capture the ‘All India’ audience (partly because the growth of regional cinemas, especially the Tamil and Telugu cinemas that dominate the South). Bollywood producers shifted towards an address to younger more affluent Indians in metros (cities of over 5 million people) and to NRIs (Non-Resident Indians) overseas. As a consequence they have lost some of the audiences in small towns. Posters are now more in the international Hollywood style, though they often still feature the stars prominently. Below I’m including a couple of photos I took in West Bengal in 2009. Hindi cinema shares screen space in Kolkata with Bengali films but Hindi films have more promotion and the giant image of Salman Khan in Wanted covers the wall of a high-rise building in much the same way that artists painted on the sides of buildings in the 1980s. The action heroes like Salman Khan, Ajay Devgn and Akshay Kumar have maintained star status partly because their appeal is across classes.   The other image from 2009 is from Kurbaan, an example of the Western-orientated spy thriller starring Kareena Kapoor and her partner (now husband) Saif Ali Khan. The film was well-received by critics but considered a flop. As a poster it refers us back to those dynasties. (Saif Ali Khan is the son of Sharmila Tagore, herself first an actor for Satyajit Ray before moving into mainstream Hindi cinema. It’s also interesting to compare the 2009 poster with one in the Museum’s exhibition of Shyam Benegal’s Zubeidaa (2001) starring Karisma Kapoor. This is classified as ‘mainstream Hindi cinema’ by some sources, but I’ve always considered it to be more of a parallel film. I think that you can see the difference between the appeal of Benegal’s historical romance (a form of biopic) and that of the later film with Kareena Kapoor. 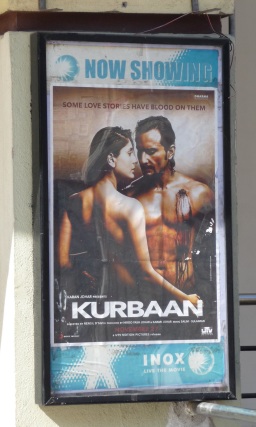 (This isn’t the same poster as in the exhibition)

So, why not pop into the exhibition when you visit Bradford International Film Festival in April? And if you teach film (or media) why not bring a class and explore the exhibition and its resources? I intend to make a return visit. I’ll preview the Indian films in BIFF in the next couple of weeks.

One last point: the Museum’s title for the exhibition is fairly carefully chosen and most of the text equally so, but it’s still likely that the average visitor to the gallery will assume that Bollywood = Hindi cinema = Indian cinema. It’s quite natural that the predominantly Urdu/Punjabi/Kashmiri population in Bradford should prefer Hindi cinema, but it would have been nice to see some posters from the South. Here’s one I’ve posted on flickr.