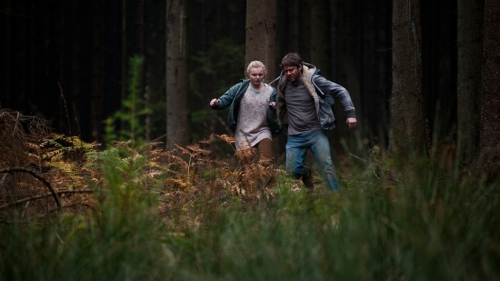 Adele and Timo escape through the woods.

This was the winning film in the European Features competition at BIFF. I saw it in two parts, having to see the opening after I’d seen the rest of the film. I don’t think that this spoiled my enjoyment. The plot is relatively straightforward. Adele is a teenager living on a farm in a remote and wooded area in Germany. Her withdrawn demeanour is briefly sketched in and she barely communicates with her parents. She is surprised by an escaped prisoner who has got into the farmhouse but instead of betraying him she decides, after learning that he has killed someone, to help him. They run away together and she then tells him that she will help him over the border into France – but in return he must push her off a cliff. This unlikely scenario then sets up a fugitive chase/road movie. Two characters must learn to work together and to learn about themselves in the process. The narrative has a form of ‘open’ ending and I won’t spoil any more of the plot.

In the interview below, the director Emily Atef explains that it took her several years to develop the script and organise the production – in fact she made two other features during this period. At one point she was selected for a Cannes ‘Residence Award’ which enabled her to move the development forward substantially. Atef has clearly been on industry radar for some time. Born in Berlin to Franco-Iranian characters she has also lived in the US and in London but now she is based in back in Germany. After watching this film I realised that I have a DVD of her 2005 feature Molly (about a young Irishwoman who travels to Poland). I must watch it again and post on it.

Kill Me is a success for various reasons, not least the performances by the two leads. Roeland Wiesnekker (Timo) is an experienced Swiss actor who suggests a character turned in on himself. He’s tall and dark and bear-like compared to the blonde Maria Vargus as Adele, known in the UK for her role as Klara in The White Ribbon. There is excellent use of landscape and Emily Latef tells us that she received regional funds from Région Provence-Alpes-Côte d’Azur and Filmstiftung Nordrhein-Westfalen. Probably most important though is the way that the script ideas are handled. It’s a classic case of not ‘doing a Hollywood’, so at the beginning of the film we don’t get any real explanation of why Adele is so withdrawn and certainly not why she would want to fall from a clifftop. Instead we have to piece her story together from looks and scant plot information. She will later tell Timo something but there is still plenty concealed, especially about his back story, so we travel with the pair never quite sure what will happen. I will reveal that the pair will reach Marseilles which is a ‘liminal’ region, not quite France, but not yet Africa and an iconic ‘end’ to Europe. In the Q&A below somebody asks the director if she ever considered a melodramatic ending. I think we know that she didn’t, though I must say that the location she chooses has been used in the ending of at least one great French melodrama of the 1930s.

The film has been released in France and the international sales agent is the well-known distributer-producer Les films du Losange (long associated with its co-founder Eric Rohmer). I hope they are able to find distributors in other European countries. It is a worthy winner of Bradford’s competition.

Here is the Interview/Q&A when the film was at the Raindance Festival in London in 2012:

This entry was posted in Festivals and Conferences, Films by women, German Cinema and tagged BIFF 2013, road movie. Bookmark the permalink.