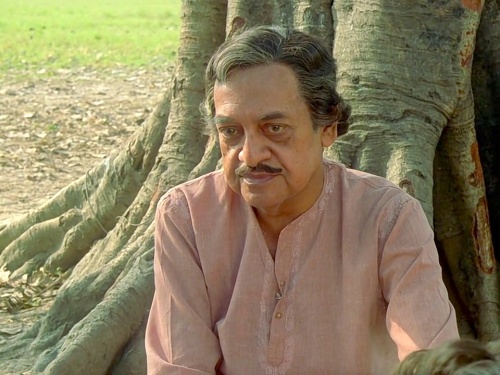 Channel 4 celebrated the 100th Birthday of Indian Cinema with five late night/early morning screenings of Satyajit Ray films. Perhaps we should question this strategy – why not five different directors? But this is what we got and at least Channel 4 (a pale shadow of its former self these days) still shows Indian films. I’m certainly grateful for the chance to see Ray’s last film which turned out to be a very enjoyable watch and a moving tribute to the director and to Indian cinema.

The narrative is on one level very simply structured but also rich in provocations about Bengal, India and the wider world. The ‘stranger’ of the title announces himself by a letter that arrives one day in the comfortable Bose household in Calcutta. Wife and mother Anila is startled to read that her uncle, who she barely knew when she was an infant before he left Calcutta 35 years ago, is on his way to visit her family. Anila’s businessman husband Sudhindra is immediately suspicious but his small son Satyaki is delighted at the prospect of seeing his ‘great-uncle’. I don’t really need to give any more of the plot outline. You can probably guess much of it and the kinds of little dramas that arise. This is a very familiar narrative with ‘the stranger’ always likely to shine a light on whatever are the dark secrets of the family or to stir up the hopes and dreams of family members etc. One of the strongest ‘echoes’ for me was of a similar character appearing in the Charles Burnett film To Sleep With Anger (US 1990). Danny Glover is the character from ‘back home’ in the South who arrives in an African-American household in suburban Los Angeles and ‘disturbs’ the household. In the case of Uncle Mitra who disturbs the Bose family, Ray is to a large extent embodying his own ideas and values in the character and subjecting bourgeois life in Calcutta to an analysis based on his own global perspective. (The 35 years that Mitra has been ‘away’ correspond almost exactly to the length of Ray’s cinema career which began with the release of Pather Panchali in 1955 and finished with the making of this film.)

Most of the film is set in the confines of the Bose household – in the living rooms and bedrooms – with a brief sequence on the Maidan where Mitra meets Satyaki’s friends. Significantly, it ends with a trip to the rural area where Rabindranath Tagore developed his education communities at Santiniketan (and where Ray studied). Mitra shares Ray’s interest in music and his main interest is in anthropology which he has pursued by travelling the world and living with various communities ‘outside’ bourgeois society. Ray also explored the tension between the Calcutta bourgeoisie and the rest of Bengali society, most clearly in Days and Nights in the Forest which has several echoes in Agantuk – the final section of the film includes a dance sequence involving a group of Santals (‘tribal people’). Mitra’s arrival challenges the materialism of Calcutta society and in confrontations with Anila and Sudhindra’s friends and colleagues, Mitra questions whether Bengali intellectual life has really sustained the vigour which Tagore instilled in it and whether or not it is too much in hock to Western values. It’s significant that the film was made just at the point when the Indian economy was beginning the process of ‘de-regulation’ – there is a nostalgic reference to Thums-Up, the local Coca Cola substitute (Coke was not available in India during the 1980s).

The film has been described as a comedy and it is true that there is a lightness about it, but also I think it offers a serious critique in what seems like a very personal statement. The playing of all the roles is very good but in particular Utpal Dutt as Uncle Mitra really nails it.

This entry was posted in Bengali Cinema, Indian Cinema and tagged Satyajit Ray. Bookmark the permalink.