The Woman in the Fifth (La femme du Vème, France/UK/Poland 2011) 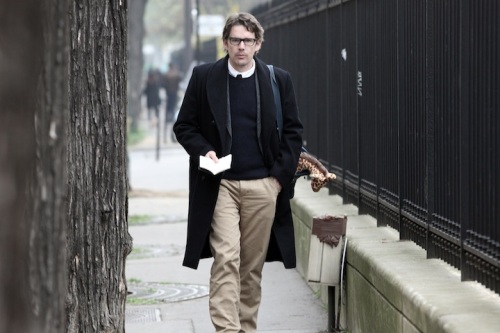 Ethan Hawke as Tom Ricks. This is representative of compositions in the film which show the character often ‘penned in’ by his environment.

There are many interesting ways into The Woman in the Fifth. It’s another French film in which Kristin Scott Thomas plays a role which requires her character to adopt a background to explain the fact that she speaks English and French and up to five other languages. It is also  an entry into the relatively small world of films by Polish-born directors working out of the UK and travelling to Paris (Polanski ‘s films have a slightly different combination of the same factors). It’s a film in which Ethan Hawke plays an American in Paris who doesn’t end up spending the night with Julie Delpy and finally it follows another adaptation of a Douglas Kennedy novel, The Big Picture (France 2010) with Romain Duris.

Put those four ‘ways in’ together and you’d expect there to be a fair amount of interest generated by the film, but it seemed to do poorly in UK cinemas and I was lucky to catch it on Film 4 – where non-anglophone films now seem to be becoming more marginalised. It isn’t hard to see why the usual audience for Scott-Thomas or for Hawke’s Paris romances wouldn’t be attracted. Hawke’s character is a man seemingly ‘on the run’ and the narrative offers little about what has happened earlier except that he is a lecturer and a writer visiting Paris where he has a 6-year-old daughter and an estranged partner who has taken out a restraining order to prevent him seeing the child. Tom Ricks (Hawke) soon finds himself effectively ‘down and out’, having had his suitcase and money stolen. Chance lands him in a dingy room above a café in a working-class district of the city with a dubious job offer that will allow him to pay the rent. What happens after that demands quite a lot from any audience expecting a mainstream thriller.

Director and adapter Pawel Pawlikowski came to the UK as a teenager and was first a documentary filmmaker before directing two of the best British films of the last twenty years Last Resort (2000) and My Summer of Love (2004). These two films appeared to combine elements of British and East European  filmic realisms, the first bleak and satirical in its depiction of a seaside town used to hold asylum seekers, the second more lyrical, but also slightly disturbing in its representation of adolescent passions in a beautifully rendered West Yorkshire summer. The Woman in the Fifth offers a similar mix of elements reminiscent of both British and Polish cinema, but also French cinema that probes into the world outside the Paris tourist traps and aspects of film noir.

The film’s website offers statements by both Pawlikowski and Hawke. Whether you want to visit it before or after the watching the film is an important decision to make. I read the comments afterwards and that was the best decision for me. I ‘ll try not to spoil the narrative. This is a film where casting and all the key aspects of film language from costume through cinematography, set dressing/choice of locations, costume and music combine to create a very distinctive ‘feel’ to the narrative. Pawlikowski’s previous collaborators, Polish cinematographer Ryszard Lenczewski and British music composer Max de Wardener,  contribute a great deal. Visually the film inhabits a Parisian world which I recognise from the films of Claire Denis and Jacques Audiard with interiors which remind me of Polanski’s The Tenant and one or two non-Parisian locations. Pawlikowski and Lenczewski spent a long time looking for unusual locations and then for ways of shooting them to create an expressionist world in which Tom Ricks seems forever to be hemmed in or made vulnerable i some way. The music is sparse and again unsettling. As the director’s comments suggest in the ‘Production Notes’, the music doesn’t conjure up the horror film but instead is quietly seductive but just a little ‘off’ or atonal – and therefore disturbing.

The script requires that Ethan Hawke be dishevelled and weighed down by his heavy black spectacles but that he interacts with three women. Delphine Chuillot as Nathalie, his wife, has a relatively small role, mainly in long shot, but Kristin Scott Thomas as an elegant and eroticised femme fatale figure is as good as you would expect. As the Polish waitress, Jania, Joanna Kulig is equally good and very sexy in a completely different way to Scott Thomas.

Ethan Hawke sans specs for once with Joanna Kulig.

I don’t really want to say much more about the narrative. I thought at first that it was going to be like Dirty Pretty Things and that Tom would uncover some shady goings-on, but though the milieu is simar, it is a very different kind of film. Pawlikowski suggests that his Paris and the story he has moulded belong to an imaginary world, presented as they are via an American story with American, French and Polish characters. Perhaps this is why I was also reminded of Orson Welles’ version of Kafka’s The Trial with Anthony Perkins as poor K stumbling about a city he doesn’t know.

The more  think about the film, the more interesting I find it. Approach it with an open mind and don’t worry too much if you really don’t understand what is going on – you can think about it afterwards! The ‘Fifth’ in the title by the way refers to the Fifth Arrondissement in Paris, one of the oldest parts of the city on the Left Bank and in the ‘Latin Quarter’ – and a long way from the district where Tom finds himself.

One response to “The Woman in the Fifth (La femme du Vème, France/UK/Poland 2011)”