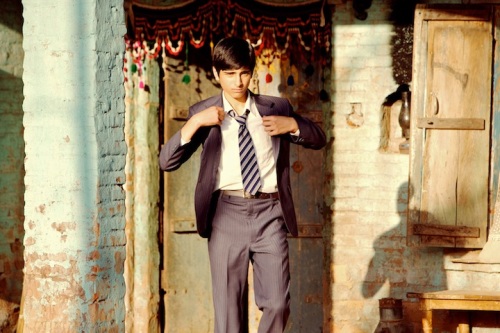 Aqib Khan as Sajid on arrival in Punjab.

West is West is an odd film. You wonder about why it was made – or at least why it was made in 2011. Ayub Khan-Din is a British actor and playwright whose 1997 play East is East was adapted as a film in 1999 and was a considerable commercial hit. At the time I found the film quite troubling in terms of its racial politics. Khan-Din has always maintained that the play was autobiographical and it felt to me that his anger – directed at his father and the way that he treated his mixed race children – derailed the narrative to a certain extent. The film was a social comedy and a ‘coming of age’ film about the teenagers in the Khan family of Salford and I felt that the humour invited non-Pakistani audiences to laugh at rather than with British Pakistanis. I think it is fair to say that the film was controversial in academic film studies/cultural studies for that reason – though some of the audiences that I thought would be offended seemed to have enjoyed the comedy.

Because I hadn’t ‘enjoyed’ the earlier film – though I could understand its success based on a strong narrative and excellent performances – and because the reviews were not very good, I ignored West is West on its cinema release. But when it turned up on TV (it’s a BBC Film) a few weeks ago I recorded it out of a sense of duty. And I actually enjoyed it more than the first film. However, it is slight as a narrative and I’ll explain my puzzlement about why it was made.

East is East was set in 1970-1 when the older children of ‘George’ Khan (Om Puri) and Ella (Linda Bassett), owners of a chip shop amongst the back-to-back terraces of Salford, are struggling against their father’s traditional view and trying to escape home and make their own lives. The youngest child, Sajid (the author’s alter ego) is still at school and it is he who becomes the focus of West is West. The sequel takes place four or five years later. Worried by Sajid’s behaviour at school, George decides to take him on a trip back to Pakistan where his older brother Maneer (Emil Marwa) has been living with George’s other family in rural Punjab.

The ostensible reason for the trip to Pakistan is in fact to find Maneer (the only ‘compliant’ son) a wife. Once in Punjab, a conventional comedy of ‘culture class’ develops in which Sajid, dressed in his uncomfortable (and too small) British suit and tie – see above – rails against his new family and environment. But of course he eventually makes friends and in a conscious nod to Kipling (from whence the two films’ titles are derived) he ‘goes native’ like the Brits before him under the Raj. This narrative is mildly amusing but would have been improved without the wily/eccentric teacher (who seems even more a caricature from Kipling) who George has found for him. More interesting is the developing narrative about George, now back in his village as Jahingar, who has to deal with the resentment and coldness of his first wife Basheera (Ila Arun) who he abandoned with her daughters when he went to the UK thirty years earlier. Basheera is understandably still hurt. Her son-in-law, who is effectively the head of the household sees an opportunity to persuade George to invest in a new house for the farm. All this means that George stays longer than the month he had promised, setting up Ella’s arrival in the village. In the meantime, the marriage quest – the conventional high point of such films – remains somewhere in the background and the drama focuses, quite effectively, on the George-Basheera-Ella triangle.

Sajid, now dressed sensibly, with his new friend (left) his dad and Maneer

This plot outline makes the film narrative sound quite ‘packed’ but the overall effect is muted. Partly, I think that this is because the production is basically British, plonked down in India (Punjab and Chandigarh). The technical credits are very good – director Andy De Emmony and cinematographer Peter Robertson are both highly experienced in UK TV filmed series production – and the music by Shankar Mahadevan and Robert Lane is excellent but the authenticity of the music can’t overcome a sense that the film simply isn’t ‘local’. This is emphasised by a plot point that I won’t reveal but the mostly very good acting performances here are undercut by this lack of involvement with local film culture.

I hope I’ve indicated that this is a film with many worthwhile elements that doesn’t come together for audiences. Several comments I read said it isn’t funny. Well no, it isn’t. That’s because it is more a family melodrama that doesn’t have enough faith in the mix of stories it wants to tell. The other problem is that most of the audience will have forgotten the details of the first film from over ten years ago. Why wait so long for the sequel? Ayub Khan-Din is clearly a gifted writer and this film had the possibility of working in the South Asian market. After its Toronto Festival appearance it was widely reviewed in India but for all the reasons outlined above it never took off. I think that Khan-Din would have been better off de-personalising the story and writing something from a more distanced perspective. A mixed British-South Asian creative team might have given the narrative a more ‘rooted’ feel. It’s still worth watching, especially for the moving scenes between Linda Bassett and Ila Arun, but overall a missed opportunity.