Woody Grant (Bruce Dern) and his son David (Will Forte)

Immediately after I saw Nebraska my impression was that I had seen one of the most enjoyable films of the year and also one of the best. Since then I’ve thought about it several times and it’s in danger of becoming the year’s No 1. There are several reasons why it stands out. First it looks terrific in Black and White CinemaScope with slow pans across the flat landscapes and a higher than usual number of long shot framings by Phedon Papamichael, director Alexander Payne’s regular DoP. Second, the excellent casting and wonderful performances give us convincing representations of communities in the small towns of the ‘high plains’ of Montana, Wyoming and Nebraska. This is a film about a ‘real America’ – strangely beautiful even when run-down and tired. I should also mention the excellent score by Mark Orton. I’m actually listening to the soundtrack streamed live as I write.

Of course, part of my fascination is because the film speaks specifically to men of a certain age. The narrative offers us a father and son on a road trip – which, as someone who didn’t like the film pointed out to me, combines two of the most common traits of American cinema. The trip involves a bemused and possibly bewildered retired man who wants to travel from Billings, Montana to Lincoln, Nebraska to claim his ‘winnings’ in what he thinks is a lottery but which in reality is just a marketing promotion by a magazine publisher. This is Woody Grant (Bruce Dern). His wife and sons attempt to dissuade him, but in the end the younger son David (Will Forte) decides to drive him to Lincoln, hoping that the journey will give him time to re-build his relationship with a father who he felt was ‘absent’ during his childhood.

The setting takes Alexander Payne back to his home state and reminds us of both Election (set in a high school in Omaha) and About Schmidt (a road movie, starting from Omaha, with a similarly aged character at its centre played by Jack Nicholson). Like those two films, Nebraska has both comic moments and ‘real’ characters with elements of both hero and anti-hero. One difference, however, is that both the earlier films were literary adaptations but Nebraska is an original script by Bob Nelson, himself a native of South Dakota. Nelson and Payne know the territory and the people and, apart from the intrusion of some black comedy ‘business’ with a couple of ‘goonish’ cousins, the film is pretty close to Rossellini’s ideas for neo-realism. It’s a story taken from a real community with family secrets and relationships that most of us can recognise as ‘real’. I’ve heard criticisms that the film is depressing but I found it to be uplifting and optimistic because it seems to deal with life as it is and not as fantasy.

Father and son outside the old family house in Hawthorne, Nebraska

It has been fascinating to read some of the commentary on the film and some of the interviews and to discover the influences and references, many of which occurred to me watching the film and others which make sense on reflection. The strength of the film in aesthetic terms is its representation of landscape and characters in that region which represents the spine of ‘middle America’ and in Hollywood terms the terrain of the classic Western. In cultural and geographical terms this is the region from Montana down through Wyoming and South Dakota to Nebraska, Kansas, Oklahoma and North-West Texas. The two films that came to mind as I studied the landscapes were Brokeback Mountain and Hud (1963). I remember from Brokeback the opening scenes in Signal, Wyoming and the drama of the huge skies. Similarly with Hud, I remember the Texas landscapes presented in Black & White ‘Scope.  Those two films are linked by the inputs of Larry McMurtry, the great storyteller of the ‘Twilight Western’ who helped to adapt Annie Proulx’s short story for Brokeback and whose novel Horseman, Pass By was the source for Hud. McMurtry has the feel for landscape and communities in the region and I wasn’t surprised to discover that Alexander Payne had always wanted to cast Bruce Dern, a ‘1970s character actor’ in what Payne saw as his own version of a ‘Peter Bogdanovich film’ (see this informative interview with Kevin Tent, the editor on the film). Bogdanovich made two black and white films in the early 1970s – the depression-set road movie (travelling through Kansas) Paper Moon (1973) and the Twilight Western, The Last Picture Show (1971) – based on Larry McMurtry’s novel and set in a Texas town in the late 1940s/early 1950s. 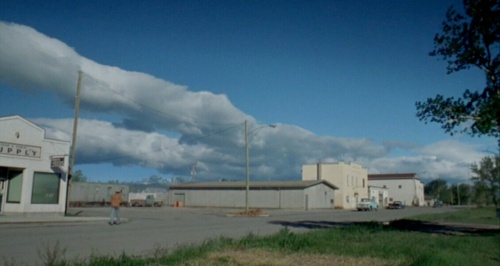 Heath Ledger as Ennis Del Mar walking into the town of Signal, Wyoming at the start of Brokeback Mountain 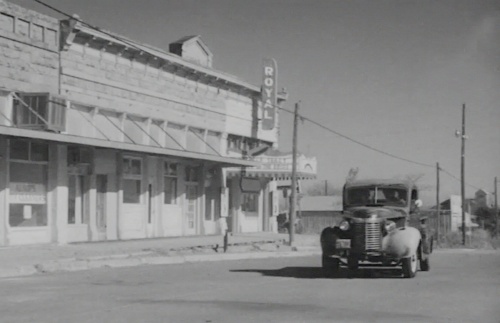 The small Texas town in Hud

The Last Picture Show is the most often quoted reference for Nebraska. As well as the monochrome landscapes and small town views of the plains, there is also a thematic resonance with all three films I’ve mentioned here. The Twilight Western is in this particular formulation a contemporary story set in the geographical ‘West’ as defined by Hollywood. There are usually two central male characters, one upholding the honour/traditions of the West and the other negotiating with ‘modernity’. In both Hud and The Last Picture Show there is also a generational narrative with an older and younger man attempting to learn from the other. These primarily male narratives are about loss – the loss of ‘freedom’ and the ability to ‘act’ with dignity and honour. Perhaps it is a push to equate the confused Woody with older characters such as those played by Melvyn Douglas in Hud or Ben Johnson in The Last Picture Show (or indeed Robert Preston in Junior Bonner with Steve McQueen as the younger man) – but the links are there. Woody has turned to drink and to lassitude, remembering his past as the owner of a small garage. We learn later that he might have been an honourable man in business – but also that he might have suffered from his experience of the war in Korea. Several commentators refer to him as an alcoholic but he seems to me to have been a man who drank beer in bars rather than face his demons at home. That judgement is something audiences have to think through for themselves – the narrative doesn’t judge the man as such. I’m not sure he is suffering from any form of dementia either. He doesn’t say much and his belief in his ‘win’ is perhaps pathetic, but he still has an identity that he cares about. Bruce Dern’s performance is remarkable but it would be a shame if it overshadowed that of Will Forte as David – the genuine protagonist of the narrative. Forte seems to have worked mainly in TV, but he is very good in this film. 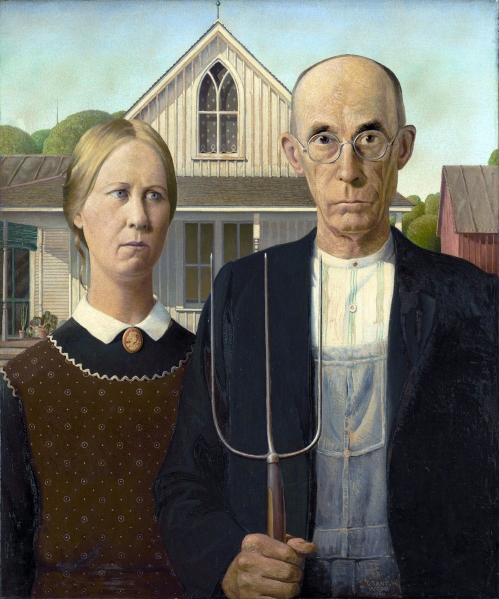 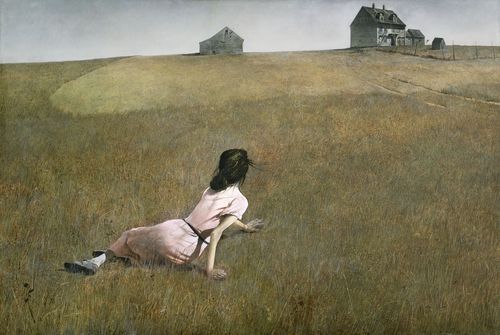 The interview with Kevin Tent throws up two more interesting references in terms of the look of the film. One is to note that ‘Woody Grant’ is a name that reverses ‘Grant Wood’, the artist who painted ‘American Gothic’ the iconic portrait of the rural American couple and a potential model for Woody and his formidable wife Kate played by June Squibb – another terrific performer mining the comedy in the script. There is also a suggestion that another iconic painting, Andrew Wyeth’s ‘Christina’s World’ (1948) was an influence – even though Wyeth was from Maine. ‘Christina’s World’ is possibly my favourite painting so perhaps my appreciation of the beauty of these desolate landscapes is somehow triggered by memories of the painting?

The music is the final part of the aesthetic construct. Again, I have to confess that American ‘roots music’ is my favourite form. In this interview from Film Music Magazine, Mark Orton explains his own background and that of his colleagues in the Tin Hat trio:

We had all studied classical music but were all improvisers as well. We listened to Smithsonian records, Thelonious Monk, Iannis Xenakis, and Willie Nelson. We were a composer’s collective and the only thing we had decided about the group early on was that we would stick to an acoustic instrumentation and use extended techniques and preparations rather than anything electric or processed. Whatever of bluegrass’s past that found its way into my/our sound did so naturally. (http://www.filmmusicmag.com/?p=12017).

That’s a pretty eclectic mix and the interview is well worth reading. As Orton puts it, the music takes the film away from a specific genre while at the same time firmly locating it in the American ‘Heartland’. The characters are at one remove from the rural people of the dustbowl stories and the cowboys of the Twilight Western, but they certainly ‘connected’.

Nebraska is a triumph of aesthetics and storytelling. I’m sure there is a great deal more to say. What did you all think?

This entry was posted in American Independents and tagged Alexander Payne, neo-realism. Bookmark the permalink.