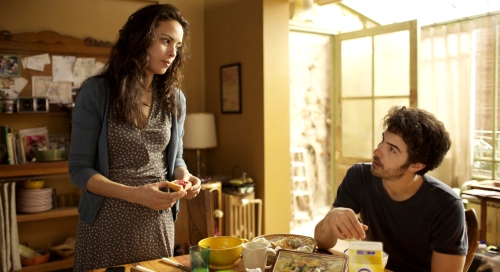 I’m surprised at the relatively low-key distribution of this Asghar Farhadi film in the UK. It’s had some great reviews but it seems a crowded marketplace at the moment (it would have been good to see it in January-February when there were no other major foreign language films around).

This is Farhadi’s first film in French. The accompanying press pack suggests that he had already been working towards a European production before he was awarded some French public funding after the success of A Separation – one of the most celebrated films to win the Foreign Language Academy Award. A Separation also did phenomenal business in France with over 1 million admissions. I wonder if the film is understood differently by audiences familiar with Farhadi’s Iranian work and those coming to him for the first time with this French-language work? The obvious difference would seem to be that in the Iranian films we are nearly always looking for metaphors and allegories whereas the French film will presumably be taken at face value as a form of family melodrama?

The story involves a woman, Marie (Bérénice Bejo) who has been married twice and is now having an affair with Samir (Tahir Rahim), a married man whose wife is in a coma. Marie has persuaded her second husband Ahmad (Ali Mosaffa) to return to Paris from Iran in order to formally agree to divorce her. She has two daughters from her first marriage, Léa and Lucie, and Samir has a young son, Fouad. These six are the principal characters in the drama. Marie meets Ahmad from the airport and immediately he is wary because she has not booked a hotel for him. Instead she wants him to stay at their house where the three children are also staying. He soon discovers that his presence is required for another reason besides the simple legal procedure. He is needed as a kind of counsellor since it is clear that all is not well in the household. 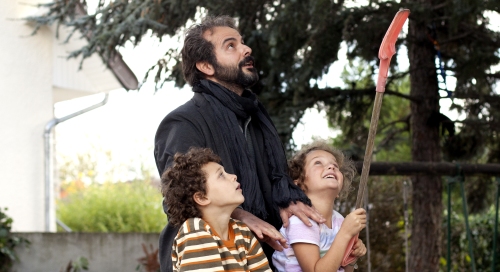 At first, with the divorce looming I thought this might be a continuation of A Separation. Then it occurred to me that it was more like a French version of About Elly. In that film, once a lie is told, everyone must continue to lie in order not to expose any impropriety in their various relationships (i.e. all the characters are aware of the difficult position of women in Iranian society). In The Past, characters don’t trust each other to cope with the truth, but by lying they make it more difficult to come to terms with exactly what has happened. I’ve subsequently realised that as in Farhadi’s three previous films it is the outsider Ahmad who acts as the disruptive agent in the opening up of the narrative – not deliberately on his part, but simply because he comes from ‘outside’.

Asghar Farhadi has many strengths as a writer-director. He writes wonderful scripts with interesting characters. He directs actors brilliantly and he is able to move the narrative forward seamlessly, albeit at a pace which would be too slow for Hollywood. Fortunately, there is no requirement to cut at Hollywood rhythms so Farhadi’s complex narratives can unfold at the pace he determines. The film is 130 minutes long and at one point when Farhadi peels back yet another layer of the onion that is the script I did feel that perhaps he had taken just one step too far in his convoluted plotting, but his skill is so great that I was soon following the next section of the narrative and through to the delicately handled and well-judged closing moments. 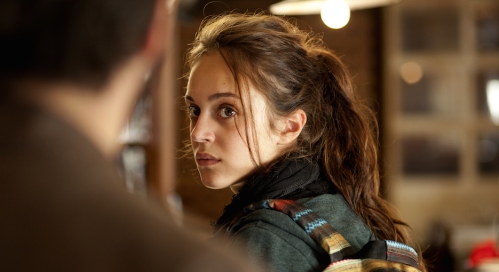 In a film like this it is all too easy not to notice the effort that goes into the construction of scenes. The film was budgeted at €8 million which is significantly higher than the current UK budget for this kind of film, but modest by some French standards. The interiors were constructed in a studio and for the exteriors Farhadi decided not to include any iconic Parisian sights which would detract from the drama. The press pack interview with cinematographer Mahmoud Kalari who also shot A Separation and earlier worked for Panahi, Kiarostami and Makhmalbaf is revealing. He suggests that the tension and frantic activity in A Separation (in which there are many quasi-legal disputes about who did what) was achieved through handheld camerawork. The Past started as another handheld shoot, but Farhadi soon changed to using a static camera. At the same time some scenes have many short shots and plenty of pace while others have relatively long takes. Kalari argues that Farhadi is very ‘organic’ (he doesn’t use that term but I think it matches what he means). He tries to avoid the artificialty of ‘acting’ or ‘perfect compositions’. Here’s an extract from the interview in which he explains what is different from the approach in A Separation:

. . . here the camera takes on the point of view of each character. In this film, the characters get close to each other, while still maintaining a certain distance from one another. But they are gathered together in sorts of choral sequences. And so, Asghar Farhadi has taken on the way each character views the others and the situation. And then, there was also something that my team was constantly talking about here, something they found both disconcerting and interesting: Mr Farhadi placed the actors in the most uncomfortable situations and the most complicated in terms of lighting and setting up the shot. He would place them in doorframes, which is something we avoid at all costs in the cinema . . .

One thing to note here is that Farhadi is not a ‘social realist’ or ‘neo-realist’ in his approach (see discussion of A Separation on this blog). In some ways, and perhaps because of his theatre background, he seems nearer to Mike Leigh. (Farhadi also rehearses his actors for several weeks before shooting begins, taking them through various exercises and encouraging them to learn about their characters.) I should also point out that for most of the film, Farhadi makes only a limited use of music and the film only begins to resemble a melodrama in the final section. I do wonder about the symbolism of some elements of mise en scène but I think I need to see the whole film again before I explore the idea further.

I note that one of the features of Farhadi’s script for A Separation was that it was in some ways a universal story, even though it included elements only found in Iran. The Past is also a universal story but without the obvious restrictions on social behaviour that exist in contemporary Iran. Could the film be set anywhere in the West? Is there anything specifically ‘French’ about it? One obvious observation is that the restrictions in Iran derive from certain attitudes towards Muslim teachings and in France the whole question of ‘integration’ and the secular French state is still very much a live issue. There is no reference to Muslim culture as such in The Past. As far as I am aware, Marie is not from a ‘minority community’ in France – but she has chosen to live with first Ahmad and then Samir (one of the children suggests that Samir looks a little like Ahmad – that he is a kind of ‘replacement’). Samir’s wife is similarly not from a specific minority. The French accent is a key distinguishing mark here (once again lost to us cloth-eared anglos). Samir’s shop assistant (he has a dry-cleaning business) is an illegal worker  who has ‘an accent’. Ahmad also speaks French with an accent (the actor had to be coached – we never learn just how long the character might have lived in France). There does seem to be a focus on migrant and second/third generation immigrant communities. France is home to many significant refugee communities and Paris is home to a significant Iranian diaspora community – and we should remember that one of the issues in A Separation is whether or not the couple’s daughter would have a better future abroad. Casting is also important. Samir is played by Tahar Rahim, a rising young star associated with key roles related to North African identity in France. But he and the other two lead actors insist that ethnicity/cultural identity/French social issues were not part of the film. Ali Mosaffa says that it is simply a ‘human story’. As if to emphasise this Rahim tells us that Farhadi asked him to watch De Sica’s Bicycle Thieves and to focus on the father-son relationship. That slippery concept of the humanist film is very much there in The Past – everyone has a perspective and a reason for doing what they do. They all behave like ‘real people’ do and they have their ‘ups and downs’.

I have to end by praising all the actors’ responses to Asghar Farhadi’s direction. I must pick out Bérénice Bejo since her’s is the most dramatic change of image from The Artist and Populaire. In those films she is smart and indeed ‘Peppy’ in The Artist. In The Past she is weary in loose-fitting, almost shapeless dresses with her hair loose and little make-up – and she looks wonderful. Perhaps it’s the Anna Magnani/Ingrid Bergman look from Rossellini’s films?

Asghar Farhadi’s work is featured in Chapter 6 of The Global Film Book. See also the entry on Fireworks Wednesday on this blog.