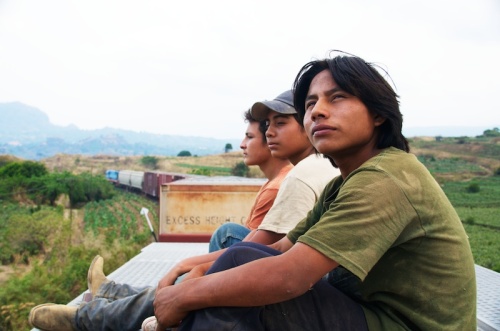 This terrific film comes to us with a glowing recommendation from Ken Loach. Its writer-director Diego Quemada-Díez began as a camera assistant on Loach’s Spanish-set Land and Freedom (1995). His work in different roles in the camera department has featured in two further Loach productions plus films by Spike Lee, Alejandro Inarittu and Fernando Mireilles among others. What he has learned from close contact with these leading directors is evident in this his first feature-length film.

‘The Golden Dream’ is about America, though the direct translation of the film’s title is the Golden – or ‘Gilded’ – Cage and it may refer back to a well-known Mexican song and later film about migration to the US. The current film has been described as a ‘poetic road movie’, though it is for much of the time a (freight) train movie. It takes three teenagers on a journey from Guatemala into Mexico where they attract a fourth traveller a young ‘Indian’ in Chiapas. The group includes a confident young man who makes himself leader and a similarly confident young woman who binds her breasts and cuts her hair to pass as a boy. After a setback, one of the original trio heads home but the others continue ‘jumping’ freight trains that they hope will take them all the way north to the American border and eventually to Los Angeles. Inevitably they will have adventures, suffer great losses and learn things about themselves. I don’t want to spoil enjoyment of the narrative so I’ll simply say that not all of them get to America and the other adjective to go with ‘poetic’ used in the synopsis is ‘severe’.

The poetry is in the images. This is a photographer’s film in the sense that meaning is carried more by the images than the dialogue. It’s not that I remember many specific images as such (even though many are striking), just that the story seems to flow so smoothly. The credited cinematographer is María Secco.

The three teenage leads are very good indeed (none have film experience as such, but all are ‘performers’ in some form of community arts) and the story is not romantic or sentimental. The travellers experience both the warmth and solidarity of the rails – and the violence and duplicity of those who prey on them as migrants. I enjoyed the musical performances in the film as well – these add to the quasi-documentary feel and the chief lesson learned from Loach is the strategy of filming the story ‘in sequence’ and briefing the cast only about the events of the day’s shoot in advance so that the actions/re-actions feel natural rather than ‘performed’.

Peccadillo Pictures distributes the film in the UK. It’s certainly worth seeing on a big screen if you can find it:

This film would make a very good companion piece to Y tu mamá también (Mexico/US 2001), a rather different form of ‘road movie’ discussed in some detail in Chapter 3 of The Global Film Book.