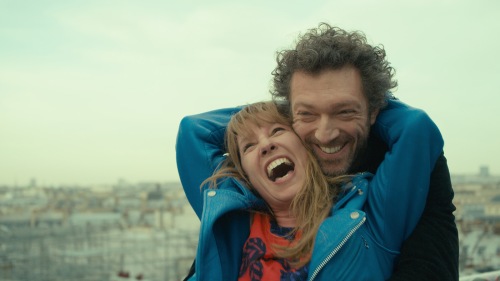 StudioCanal has a habit of what strikes me as ‘dumping’ French titles on the UK market. They open in a handful of cinemas with little promotion and then go straight to DVD or online. These are sometimes titles from interesting directors or they have been hits in France but are presumably not expected to do well in the UK (e.g. La famille Bélier last year). Mon Roi is a film by actor-writer Maïwenn. Her previous film, Polisse (France 2011), won the Jury Prize at Cannes and was widely nominated for awards. It too had a relatively limited release in the UK, despite significant success in France. I was tempted to see Mon Roi at HOME in Manchester, partly because Peter Bradshaw’s Guardian review gave the film ‘One Star’ and described it as “an unendurable confection of complacent and self-admiring nonsense: shallow, narcissistic, histrionic and fake”. I’ve been agreeing with Bradshaw too often recently and this looked like an opportunity to end that run.

The ‘Roi’ in question is Georgio (Vincent Cassel) who tells his new lover Tony – Marie-Antoinette – that he is not a ‘jerk’ but ‘the King of Jerks’. The film begins in a familiar way with an accident in which Tony has a spectacular skiing accident (offscreen). We guess from various clues that the accident was at least partly her own fault, through inattention or deliberate foolhardiness. As a result of a serious injury she must spend several weeks/months at a rather nice rehabilitation centre by the sea. This gives her time to think back over the previous 10 years and her volatile relationship with Georgio. In flashback we see how they met and how the relationship developed.

Tony at at the rehab centre.

I have to admit that there was a moment in the first half of the film when I wondered whether I could cope with watching the affair develop and then unravel. But later on I began to get more interested and overall I was pleasantly surprised. I don’t use ‘Five Star’ ratings but if I did this would be at least a Two Star and possibly a Three Star film. It certainly seems to provoke Love/Hate reactions with critics and audiences, but overall seems to score positively. Part of the interest is in the casting. Vincent Cassel plays close to his usual persona but is capable of both ramping it up and toning it down – and the latter can be quite chilling. Tony is played by Emmanuelle Bercot who I barely know of at all. Bercot is also an actor-director and she took on this challenge in the midst of directing her own films. She has the difficult task of ageing 10 years and at first I struggled to recognise the ‘younger’ woman as the same actor I saw in the rehab centre. She achieves this both through a change in her hairstyle, but also something about her eyes which I couldn’t quite figure out. Cassel has to age as well, but his features are both so well-known and so distinctive that I had no problems with his character. As I’ve often noted, films directed by women tend to have a more frank attitude towards representing sex on screen. There is certainly a lot of both Bercot and Cassel exposed on screen. They didn’t seem to have body doubles and for a pair of actors born in the late 1960s they both look in very good condition. I certainly didn’t have problems with the depiction of their sexual relationship.

Tony is a lawyer giving a public lecture watched by Georgio at the start of their relationship.

Georgio is certainly a jerk – an arse I would call him. Tony is an independent woman, a high-flying criminal lawyer who falls deeply in love and agrees to marry and then have Georgio’s baby, both actions that will later rebound upon her. Her younger brother and sister-in-law see through Georgio, but that doesn’t mean Tony is a fool. The rows between Tony and Georgio are fierce – Bradshaw’s ‘histrionic’ perhaps – but they didn’t feel fake. I know men with some of Georgio’s traits and they seemed real to me. The final scene is in its own way chilling and Tony simply looked stunned. Bradshaw dismissed the flashback structure and all the rehab scenes but I enjoyed these. The centre seems to cater for young men with sports injuries and I thought the play with social class, gender and racial identity between Tony and the ‘lads’ was interesting.

Mon Roi feels very ‘French’. That’s perhaps a facile statement, but the film has a quality I can’t describe and it seems to go with a certain sense of humour, a perception of what is ‘cool’ and a willingness to explore the extremes of relationships. I liked all the performances and I’m struck again by just how many female filmmakers in France can get films made and into distribution compared with their British sisters. It’s a shame this hasn’t had a wider release and more discussion about the characters. Emanuelle Bercot tied with Rooney Mara (for Carol) as Best Actress at Cannes for her performance as Tony. I’m not sure I agree with that but she is certainly very good.

This entry was posted in Films by women, French Cinema, Melodrama, Romance and tagged Vincent Cassel. Bookmark the permalink.