‘Creative Visions’ is the title of the latest celebration of Hong Kong Cinema at HOME in Manchester (continuing a series of celebrations that started during the cinema’s previous incarnation as Cornerhouse). This latest short season of films presents work from 1997-2017, twenty years since the handover of Hong Kong back to China.

HOME’s seasons come thick and fast these days and this was the only screening I could attend. Ordinary Heroes is an Ann Hui film and the ‘heroes’ of the title are five people engaged in political campaigns in the 1970s and 1980s, mainly concerned with the Yau Ma Tei boat people. Ann Hui is one of a handful of global auteur Hong Kong filmmakers. She first came to attention in the late 1970s when working in Hong Kong television after training at the London Film School. She has always been interested in displaced and marginal peoples – Hui herself was born in Northern China in 1947 and moved first to Macau and then Hong Kong as a child. Her so-called ‘Vietnam Trilogy’ concerns the aftermath of the Vietnam War and the people who left the country in the late 1970s. These were commercial films and Hui has worked with the major stars of HK cinema. She has tried to straddle the ‘personal’/’commercial’ divide, often with films based on social issues, historical themes and real life stories.

The central character of Ordinary Heroes is based directly on a real political figure – an Italian priest named Franco Mella who arrived in Hong Kong in 1974 as part of PIME (Pontifical Institute for Foreign Missions). Fr Mella becomes Fr Peter Kam (Anthony Wong) in Ordinary Heroes, depicted as a dedicated worker with street people and professing a form of Maoism as part of his liberation theology. He works in a garment factory by day and follows his mission by night, eventually committing himself to the needs of the ‘boat people’ – poor fishermen who live on their boots on the Kowloon waterfront. When they attempt to move onto land and seek housing, the colonial authorities decide to deport any wives from the mainland who are not accepted as HK residents. Kam begins a hunger strike in an attempt to shame the authorities. Hui also shows us a more conventional politician/organiser Yau (Tse Kwan-ho) and two young helpers Sow (Loletta Lee) and Tung (Lee Kang-sheng). The whole story is presented as two parallel narratives, one the dedication of Fr Lam and the other the complicated love story between Sow and Tung. 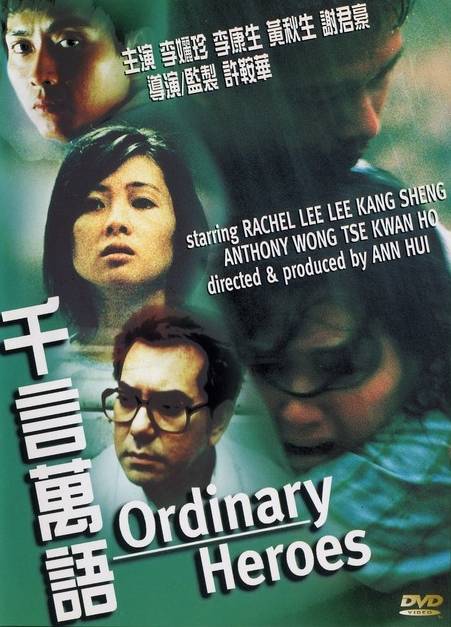 I’m still not quite sure why Ann Hui wanted to present the story in a non-linear fashion so that we see first the aftermath of an accident in which Sow has lost her memory and then through flashbacks (including the use of younger actors to see Sow and Tung as young teenagers) we learn all about the stages of their involvement in the political campaigns. One argument might be that this way we see just how much work goes in to developing the campaigns and how they are rooted in the community. The romance keeps us engaged during what is quite a challenging presentation of political struggle. One final element in the narrative is a ‘street theatre performer’, who also appears to be a ‘real character’ performing a variety of sketches which offer a Marxist and then Maoist history of China in the 20th century.

It’s difficult to source decent quality prints of films from Hong Kong – even when films are less than 20 years old – and HOME had to use what appeared to be a DVD or a digital source derived from a DVD master. It was a little washed out and the subtitles were not the best. Given the non-linear structure, I struggled to follow the first sections of the narrative, but gradually I sorted out the story and the performances of Anthony Wong, Loletta Lee and Lee Kang-sheng began to assert themselves. By the end of the film I was fully aware of the political struggle – another reminder of the suppression meted out by colonial forces as late as the 1980s. We too easily forget that British authorities were acting in this way at the time of Chinese suppression of protestors in Tiananmen Square. If you can find a DVD, it’s well worth the effort.

Ann Hui is one of the Chinese filmmakers profiled in Chapter 11 of The Global Film Book.