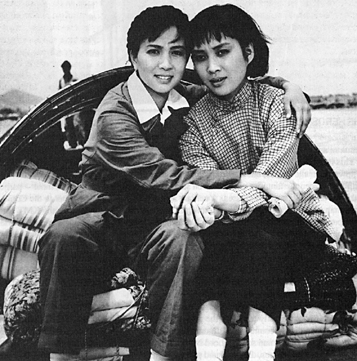 The two women at the end of the film.

Stage Sisters is a well made and enjoyable film that also has great significance in the history of Chinese Cinema. Director Xie Jin was one of the few figures to have continued working in China since the 1950s, making his first feature in 1957 at the age of 34 and his sixteenth in 1997 (The Opium War).

Plot outline:  Chunhua and Yuehong are the ‘stage sisters’ of the title. They meet in the late 1930s when Yuehong’s father’s popular opera troupe visits a town where Chunhua is all too willing to join the troupe. Eventually, they land up in Shanghai under Japanese occupation with Chunhua now a skilled performer. But the two young women gradually move apart before the plot brings them together again and the film ends with the triumph of the of the People’s Liberation Army.

The timing of the film’s production is one reason for its importance. Although it was completed well before the usually accepted date for the beginning of the Cultural Revolution in 1966, Kwok and Quiquemelle (1987) have argued that the beginnings of the clampdown were in 1963 and that Jiang Qing, the wife of Mao Zedong and a former Shanghai actress, was instrumental in the ban received by Stage Sisters. She saw both cinema and theatre in the early 1960s as failing to adhere to policies designed to promote the conception of the People’s Republic of China as a revolutionary society. (There is also the suggestion that she was settling old scores in Shanghai.) In the first instance pressure was put on Xie Jin during production to change the latter part of his film. Then before its release in 1965 a campaign was mounted against the film – because it did not paint a sufficiently negative view of the ‘bad’ characters. During the Cultural Revolution, filmmaking was first suspended altogether and then allowed only in the form of austere revolutionary model operas. With the end of the Cultural Revolution in the late 1970s, films like Stage Sisters emerged from their cocoons to charm and please audiences.

What is surprising about the ban for audiences in the West is that the vision of a Marxist future appears so palatable in the film. Two young women are shown taking different decisions about their future and it is clear which is the ‘correct’ decision. This comes across in a satisfying story that has plenty of human interest and moral ambiguity.

Traditions and metaphors
For a film like Stage Sisters to work with a mass Chinese audience, it must draw upon traditional storytelling with familiar characters and settings. This the film does by basing its story on the meeting of two young women from different backgrounds who then work together in a Shaoxing folk opera troupe.
The best known form of Chinese opera in the West is Beijing opera – the metropolitan opera with elegant choreography and movement. But there are regional ‘typical’ opera forms across the country. Shaoxing is a rural district south of Shanghai. It is famous for producing opera singers – singers in a more populist mode than in Beijing opera – and for an opera style with more dialogue and audience engagement. Touring troupes from Shaoxing would perform in the market place of towns and villages. Eventually these performances moved into the larger towns and cities, occupying permanent theatres. The tradition includes women playing men’s parts in traditional stories. Although the elaborate costumes, complex plots and sophisticated performance styles might seem to suggest an elite activity, Shaoxing opera was largely performed by actors of peasant stock for audiences of mainly poor people. Xie Jin was also from the Shaoxing region and he draws on his own background in the film.

The story begins in the mid 1930s when the Nationalists (KMT) were attempting to subdue local warlords and to suppress the growth of the Communists. When the Japanese invaded in 1937, a temporary truce between Nationalists and Communists lasted only a few years before a three-cornered struggle ensued. After 1945 the Communists began to win the war against the Nationalists and the film ends in 1949 when the victorious Communists enter Shanghai and the PRC (People’s Republic of China) is established. In between, the struggles of the opera troupe to find ways to struggle through the war act as a metaphor for Chinese society as a whole.

The personal dramas of the stage sisters parallel the fictional worlds of the plays they perform, which in turn, parallel the political changes occurring in Chinese society. (Marchetti 1989: 100)

Gina Marchetti suggests that Chunhua is a modern recreation of a female warrior character from traditional opera – aggressive, physically powerful, morally upright and inevitably victorious. This use of traditional types is common to many of the films of the PRC and works for both the ‘good’ and ‘evil’ characters, so that ‘counter-revolutionary’ figures may embody characteristics of wicked demons or monks or rogue generals.

But there are also parallels with more contemporary figures. Marchetti points to the character of Jiang Bo in Stage Sisters. She is the representative of the progressive forces in Shanghai and she acts as a major influence on Chunhua. In particular, she takes her to an exhibition in 1946 commemorating the death of Lu Xun, a literary and theatrical figure associated with the ‘May the Fourth’ Movement (the May protests of 1919 against the Versailles settlement), also known as the ‘New Cultural Movement’.

Lu Xun was another Shaoxing native who championed the rights of women, especially those of the poor and Chunhua goes on to perform in an opera based on Lu Xun’s novella, The New Year’s Sacrifice. Here the narrative of Stage Sisters points to the struggle for a socially committed theatre. It is significant that it is the Shanghai theatre world in which these events unfold. Shanghai was the Chinese city most open to the West and outside influences – both the revolutionary politics which informed the Communists and the entrepreneurial drive of capitalism.

In the final part of the Stage Sisters narrative, Chunhua is back on tour, this time performing in an opera version of The White-Haired Girl, a revolutionary play written in Yenan in 1943 at the time of Mao’s lectures on Art and Literature in which he laid out the importance of a ‘cultural army’ to fight the Chinese people’s enemies at home and abroad. Stage Sisters cleverly combines the references to traditional, ‘socially committed’ and ‘revolutionary’ operas in the performances of Chunhua. But this also requires a very careful approach to cinema aesthetics.

Combining cinema aesthetics
Xie Jin constructs the film’s narrative using three different, but interconnected approaches. First he draws on traditional Chinese literary sources (and to a certain extent, earlier forms of Chinese cinema such as the Shanghai melodramas of the 1930s). He was himself strongly influenced by Hollywood films from the 1940s studio period, especially what he termed the ‘literary’ or ‘lyric’ films such as Grapes of Wrath (John Ford 1940), Waterloo Bridge (Mervyn LeRoy 1940), Casablanca (Michael Curtiz 1942) or the 1930s Warner Brothers’ bio-pics of figures such as Emile Zola or Marie Curie.

These two sources are referenced alongside Soviet Cinema, which was perhaps the dominant cinematic mode in China in the 1950s and early 1960s. Soviet Cinema since the early 1930s had been forced by Stalin to develop what became known as ‘socialist realism‘.

Not to be confused with ‘social realism’ (a term used generally to describe films that attempt to create an authentic environment of social reality and to engage with ‘real social issues’), the Soviet variant dates from Stalin’s attempts in the early 1930s to purge Soviet cinema of its experimental and authorial features, especially those of Eisenstein, Pudovkin and Dovzhenko. Stalin decreed that cinema must be ‘accessible’ to the masses. Accessibility did not allow for ‘art’. The socialist realist model drew on Hollywood methods to present the worker as hero in romanticised scenarios with simple linear narratives. The heroic figures were privileged in the frame through the use of lighting, camera angles and composition.

In many ways ‘Hollywood realism’ and ‘socialist realism’ used a similar aesthetic and offered audiences an easily digestible form of entertainment with the ideological work of the film disguised by ‘invisible editing’ and clear identification with characters and narrative coherence. They differed of course in terms of the individualist v. collectivist ethos of American and Soviet culture.

As well as Chinese, American and Soviet aesthetics, Xie Jin in the early 1960s was influenced by a further realist aesthetic, this time from European and World Cinema. Xie Jin himself has referred to Italian neorealism and it is likely that he was also familiar with the work of other filmmakers who were influenced by neorealism, including Satyajit Ray in Bengal (e.g. in The Apu Trilogy 1955-9). The dominant form of World Cinema in the 1950s was referred to as a ‘humanist cinema’ (a term applied to both Ray and Kurosawa Akira  at the time). The reference to humanism is generally taken to mean a text which deals with human interests rather than religious themes or the supernatural. In such films, the lives of ‘ordinary people’ in ‘ordinary situations’ are the focus. The neorealist influence meant that such stories would be filmed with less stylisation than the manufactured realism of what Jean-Luc Godard would later describe as ‘Hollywood-Mosfilm’.

Stage Sisters has many influences and it is held together by Xie Jin’s feeling for the human characters.

. . . the delicacy and skill with which Xie Jin has so often juxtaposed official messages approved by the political hierarchy of the time, with other more subversive scenes and comments. His films are often laced with scenes of sheer human pleasure in everyday social banalities, delight in which quietly melts the edges of hard Party truths and relentless social critiques. Not that Xie Jin is a ‘schizophrenic’ director: rather he has an overwhelming sense for the full texture of social interaction. (John Downing, responding to Timothy Tung, 1987: 207)

(The film is in Technicolor despite the still above.)

References
Kwok and M. C. Quiquemelle (1982 and 1987) ‘Chinese Cinema and Realism’ in John Downing (ed.) Film and Politics in the Third World, New York: Autonomedia
Gina Marchetti (1989) ‘Two Stage Sisters: The blossoming of a revolutionary aesthetic’ in Jump Cut No 34.
Timothy Tung (1987) ‘The Work of Xie Jin: A Personal Letter to the Editor’ in Downing (ed.) op cit.

(Many of Xie Jin’s films were seen in America in the mid-1980s and Jump Cut 34 has a major section on Xie Jin and Chinese Cinema. Gina Marchetti’s article has formed the basis for these notes.
In 1988, following the successful release of Yellow Earth, a new Xie Jin film, Hibiscus Town was released in the UK. Xie Jin was a prolific filmmaker throughout his career (except for the period of the Cultural Revolution) but only two of his films have been widely seen in the UK.

1. Do we think that Stage Sisters manages to deliver a coherent story in a consistent style, given the many influences and pressures on its director?

2. What reading do we make of the resolution of the film’s narrative and in particular what happened to the ‘stage sisters’?

3. If the film’s narrative is indeed a metaphor for the social and political history of China in the period 1935-50, what do we understand about that history and what might we expect to see in later films?