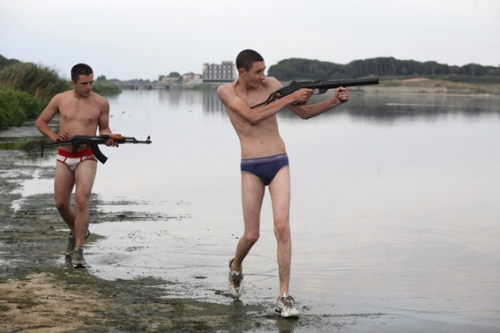 Marco and Ciro find a stash of weapons in Gomorra

Much has been written about Gomorra since it won the Jury Prize at Cannes in May and so I’ll restrict myself to a few personal observations.

I’m not sure I ‘enjoyed’ watching the film but I was impressed and sometimes startled by the world represented here.

If you haven’t followed all the coverage, Gomorra centres on a specific suburb of Naples called Campania where, in a few run-down blocks of flats, the residents form a network of families controlled by the Camorra – the Neapolitan criminal clan system similar to the Sicilian Mafia. The film offers five separate stories that overlap and create, as the punning title suggests, a contemporary Gomorrah. These stories deal with Camorra activities related to the drugs trade, waste disposal and counterfeiting designer clothing as well as control over local housing. They also explore relationships in a close-knit community. According to various descriptions of Camorra activity, it is much more likely that there will feuding between clans that keep splitting into smaller groups than would be expected in other organised criminal groups such as the Sicilian Mafia.

I confess that I found the narrative hard to follow and that the most affective aspect of the film for me was in the representation of the environment in which the action takes place. Unlike American crime films where the action takes place against a ‘backdrop’, here I felt that these were real blocks of flats and a complete ‘other world’ was being created onscreen. The effect was emphasised by not using recognisable stars. OK, I wouldn’t necessarily have recognised Italian star actors, but the central point is people were cast for authenticity rather than for glamour. Indeed this must be one of the least glamorous movies ever to show organised crime. It is a long, long way from De Niro and Liotta in Goodfellas or Pacino in Scarface, although the last of these is heavily referenced by the two young men at the centre of one story.

The whole film is summed up for me in a remarkable shot which follows a character who survives an assassination of several clan members by an opposing clan. The camera follows this man from a high angle as he leaves the scene of shooting in an apartment block and walks up a street. Gradually as the camera both tracks and pulls back, we realise that the block which appeared isolated is actually situated next to a major road and the survivor is soon on the side of the road and then swallowed up by the city. I was struck by the sense of being in an environment that is at once ‘real’ and ‘surreal’. There were moments at the beginning of the film when I wondered if all of this was happening several years ago. Then I realised that much of the film looked familiar. I may have read about similar scenes in crime novels or perhaps these were images that reminded me of places I have visited in parts of Mediterranean Europe, Africa or Asia where such environments are possible – but of course I have never seen anything like the action that is shown in the film. I think I’m trying to say that the film is about both the ordinary and the extraordinary in terms of mise en scène.

There is a lot of shallow focus in the CinemaScope cinematography and this may add to the sense of dislocation. Something else which makes the film look different is the focus on two specific immigrant groups. The African community in Naples appears to be both involved in work in the drugs trade and in supplying labour for the container port – which in turn is one of the means of entry for illegal immigration (something picked up in other films such as Michael Winterbottom’s In This World). Those illegals may be South Asian or Chinese (or East European), but in Gomorra, the Chinese seem to be well settled and engaged in an operation in counterfeiting designer clothes – in competition with Camorra-funded sweat shops. The otherwise very useful coverage in Sight & Sound (November 2008) suggests that the music in the film is “limited to the odd cheesy pop song listened to by the protagonists . . .” (S&S Review by Guido Bonsaver). But this isn’t accurate. For instance, the Chinese counterfeiters have a meal with a song by Teresa Teng playing in the background. As I discovered in researching Comrades – Almost a Love Story, Teng’s songs are a crucial emotional element in stories about the Chinese diaspora from the 1970s onwards. I don’t think this is ‘cheesy’. Much of the other music is heavy American or European rap/hip-hop/drum ‘n bass etc.. This isn’t cheesy either (although I never really know what people mean by this phrase other than they don’t like the music). Rather than “counterpointing the social wasteland on screen”, I think the music has a dialogue with it.

One aspect of the film that the Sight & Sound writers definitely get right is the focus on the criminals and the community. The ‘official’ world of Neapolitan municipal authority is barely glimpsed apart from some long shots of the police. It appears that the Camorra are both police force and welfare state within the apartment blocks. Even the Catholic church is absent apart from a cast of the Christ figure in one shot of families moving out (or moving in?) of the apartments.

If it wasn’t for the high level of violence, efficiently doled out, the footsoldiers of the Camorra would seem to be rather insignificant figures. Far more sinister and insidious are the more sophisticated activities of illegal waste dumping and clothing sweatshops and these are represented very well in terms of the way in which their ‘externalities’ (primarily the employment opportunities) permeate the community on many levels. Perhaps the most psychologically disturbing sequence sees children employed as the drivers of trucks carrying toxic waste for dumping.