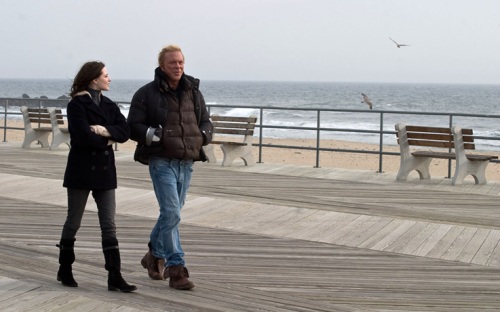 The Wrestler is an enjoyable and well-made film. It is rather painful to watch in terms of the damage inflicted on the lead’s body, but the squeamish can always look away. I wouldn’t have chosen to see the film myself, but I was grateful that someone else chose it for me.

The issue here is how an excellent small-scale genre picture like this can receive so much hype over Mickey Rourke’s performance and the film overall. Before I went to see the film, two friends both made this point to me and I can only concur. Note that I’m not putting down the film if I argue that it is ‘just’ a genre picture and if it wins awards, all well and good. Rather I’m observing that during the last days of old-style Hollywood (i.e. in the 1970s) there were films like The Wrestler popping up in circuit cinemas on a fairly regular basis, helmed by directors such as Don Siegel, Robert Aldrich etc. – tough films with grizzled old stars, often set in the more blue-collar areas of the US. It occurred to me that if the current major studios were each to make/fund half a dozen small films like this each year, we could get back to the situation in which grown-ups could go to the cinema every week or so, watch a genre movie with intelligence and have a great night out.

As well as Rourke’s performance, the other standouts in the film are the supporting cast of wrestlers of every shape and size, the great Springsteen song over the closing credits and the revelation (sorry about the pun) that is Marisa Tomei’s performance as a lap dancer. My favourite scene in the film sees Rourke and Tomei singing together in a bar. I could happily have followed them into a road movie-type romance (not something that would have occurred to me as a possibility before the film started).

This entry was posted in American Independents. Bookmark the permalink.