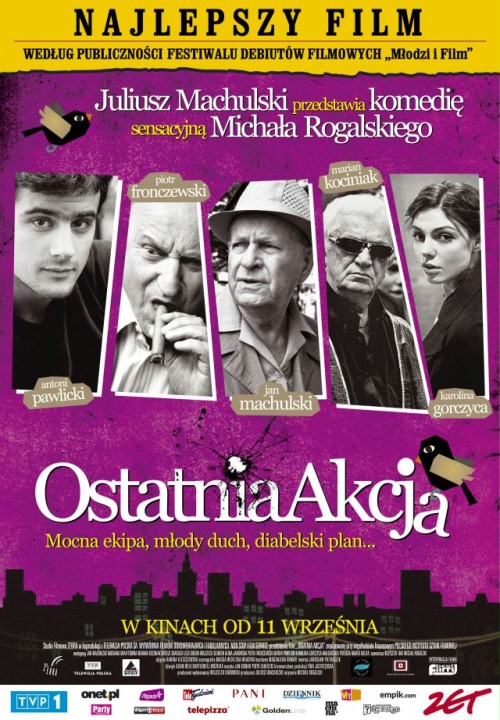 A few years ago, the UK distributor Dogwoof released a number of popular Polish films in the UK, attracting audiences from the expanded Polish community following Poland’s entry into the EU and the influx of Poles into the UK workforce. Some of these were shown in Bradford (which has always attracted the British-Polish community in the North of England). Because of this, The Last Action is a relatively familiar beast. In fact, it is much more accessible than some of the films I saw then – which seemed fuelled by excessive drinking and difficult gender relations.

The Last Action is much gentler and as a light comedy resembles several other films from around the world, at least in terms of narrative structure. At a stretch, it could be seen as a commentary on masculinity in the new Poland. Zygmunt is a man in his 80s who is in Warsaw to attend a celebration with old friends and colleagues from the Warsaw Uprising in 1945. This was the tragic episode in which Polish partisans rose up against the Germans, expecting the Red Army to support them, but the Russians failed to take the city before the Germans crushed the rising. In Warsaw, Zygmunt despairs of his weak son who now runs a business providing turf for parks, sports stadiums etc. – a man of ‘grass’. But, more urgently, he learns that his grandson has been beaten up by a local gangleader who runs a nightclub. Zygmunt rounds up his old colleagues and determines to take revenge – the ‘last action’. The strategy is to con the gangleader and lead him into a trap. In the process, some local police corruption is exposed and an old wound – the distrust between the ‘Home Army’ veterans and a Communist Party member is healed.

Overall, an enjoyable 95 mins which was clearly appreciated (going by the chuckles) by the Polish-speakers in the audience. Zygmunt is played by the veteran actor Jan Machulski who died soon after the film was completed.

This entry was posted in Polish Cinema. Bookmark the permalink.