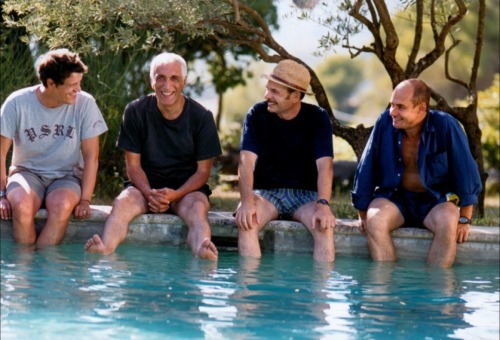 Another film on the Cinémoi TV Channel, Le coeur des hommes was not released in the UK as far as I know. It’s worth seeing I think because it offers an example of mainstream French cinema that presumably isn’t considered as a commercial proposition outside France, Belgium and Italy. It doesn’t fit the conception of an auteur/art film, a historical epic or adventure film or something ‘extreme’ or exotic for Anglo viewers. It is, however, quite entertaining and does offer something that Hollywood and British Cinema rarely attempt.

The French title is much more helpful than the clumsy English alternative. Something like ‘The Essence of Men’ might be more appropriate. It’s a ‘comedy-drama’ about four men whose ages range from early 40s to early 50s. Twenty-five years earlier they all played football for the same team (I missed the first couple of minutes where this was explained) and they have kept in touch ever since. Two of them are divorced and two are embroiled in the repercussions of extra-marital affairs. Across the four sets of relationships, writer-director Marc Esposito crams in every kind of incident that might induce a mid-life crisis – death of a parent, wedding of a daughter, unfaithful partners, business crisis, sudden romance and a desire to retire to the simple life. The last prompts a switch to that other generic French movie cliché, the house party by the pool in the sunny South where several narrative strands are resolved. Esposito is a former journalist on Studio magazine (I presume this is the French cine magazine) and two of the four characters in the film work in the monthly magazine industry.

The whole entertainment is held together by fine ensemble acting by the four principals. Jean-Pierre Darroussin was the only actor I recognised, but I’m sure that they are well-known in France. The women are all attractive, the dialogue is sometimes witty and I found the film entertaining in that it held my attention. I don’t think that I learned a great deal about ‘French men’ as such, but overall I found these characters more likeable than those in the high profile equivalent film Little White Lies (the current French success due out in the UK later this year?).

A success in France (1.5 million admissions), this film prompted a sequel in 2006. I guess that the same kind of narrative would probably be a TV series in the UK (Babyfathers, 2001-2, comes to mind). I can’t think of an American equivalent, but I’m guessing that there would be more ‘drama’ and incident – and, of course, the men would be younger and sillier. It’s good that in the French film we can just concentrate on the men for a change in this kind of relatively mundane but attractive story.

This entry was posted in French Cinema. Bookmark the permalink.