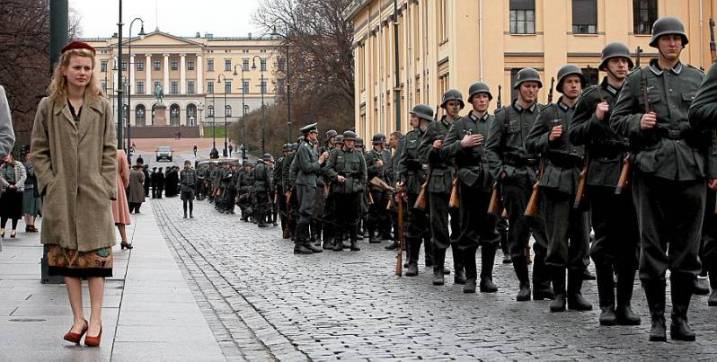 Max Manus is interesting for three reasons. It is one of the most successful films ever at the Norwegian box office. It is part of a current cycle of Second World War films produced locally in countries that suffered Nazi occupation (see our recent post on Flame and Citron). It’s well made and feels genuine in its attempt to tell an important story.

Max Manus himself was an authentic hero of the Norwegian resistance – or more properly a soldier of the ‘Norwegian Independent Company’, the Norwegian force created in the UK after Norway fell. The UK DVD carries a documentary about him and the ‘making of’ the film made by the Norwegian public service broadcaster NRK. He survived the war and died only in 1996. The events portrayed in the film all happened more or less as they are represented with only a few minor changes such as compositing several lesser characters to make the narrative more manageable. Manus published his own accounts of his adventures soon after the war and these provided material for the script.

Early in 1940, Max, a rather wild and rootless young man in his mid-20s without close family ties, decided to volunteer for a small Norwegian contingent fighting on the side of the Finns against an invading Soviet Army in the so-called ‘Winter War’ (see our post on the Finnish war film with that title). Injured in battle, Max returns to Norway to discover that his country has been invaded by the Nazis. He links up with Oslo friends and becomes involved in acts of resistance. Captured by the Gestapo he escapes and sets off on a journey that would take him several months and halfway round the world before he reaches the UK where the Norwegian government in exile is based. In a training camp in Scotland he learns the skills of a saboteur and resistance fighter and is eventually parachuted back into Norway. For the remainder of the war he carries out various raids on German ships in the port of Oslo, retreating for bouts of ‘rest and recreation’ in neutral Sweden where he meets Tikken, the Norwegian wife of a British diplomat.

The film covers a range of actions and a range of sub-genres. There are sequences which relate to the urban intrigues with the Gestapo and others which focus on the commando-style sabotage attempts on German shipping on Oslo’s waterfront. The scenes in Stockholm seem more part of a Casablanca type of spy/romance. Much of the action was shot in Oslo with its distinctive architecture but the overall presentation is fairly conventional. Really this is just a cracking good story with real-life characters who were clearly very brave men and women. At the centre is a small group of young men who have known each other since childhood. This is what distinguishes the film from others, like Flame and Citron, in which resistance proves to be a more confusing process. Max Manus tells us a story that few outside Norway will know and since it is so engaging the film should prove both enjoyable and informative for any audience. Max is played with exuberance by Aksel Hennie, currently wowing audiences in the UK as Roger Brown in Headhunters – a very different role.