Le Havre is the third of a trio of top films at Cannes in 2011 to arrive in the UK over the last couple of months – or perhaps the fourth if you include This Is Not a Film alongside Once Upon a Time in Anatolia and The Kid with a Bike. It’s annoying that we have to wait so long – and that we have to sit through months of Hollywood ‘awards’ films before we get to the good stuff. Some of us would cheer a distributor who brought out films like these in January/February.

Aki Kaurismäki is an unusual filmmaker. A Finn now domiciled in Portugal, here he turns up with a film set in the major French port of Le Havre and funded by French and German film and TV companies plus Finnish public investment. Kaurismäki has made a film in French before but this one appears to be the first of a new trilogy he hopes to make in various European ports. I’m something of a newcomer to his films but the two I have seen have shared a number of elements that I understand are quite common across his work. His films tend to feature working-class communities and dockside is a familiar destination. These are genuine ‘communities’ in which people look out for each other and especially when some official policy initiative threatens someone in the community. Kaurismäki prefers to create an imaginary world that is presented as if it were in a 1950s/60s/70s movie. So, not only do the cars, clothes, music etc. signal ‘pastness’ but also the use of studio sets alongside selected locations – and the sets are photographed according to the lighting and camera conventions of that period. The music too must fit this time period. The overall effect is a warm humanism cut with dry wit. Kaurismäki is himself a cinephile and there are numerous references to other auteur filmmakers, some directly but others in more diffuse ways.

In Le Havre the central character is Marcel Marx who lives with his wife Arletty and his dog Laika. Max somehow survives as a shoeshine man (since in this world, men still have leather shoes). Max befriends a young boy from Gabon who is hanging around the docks after the immigration police raid the shipping container in which he and a large group of ‘illegals’ have made the trip to France. The narrative then involves the attempt to get the boy to London to join his mother. In this Max calls on the whole local community of shopkeepers, bar-owners and local workers. In the meantime, Arletty has been taken to hospital with stomach pains. 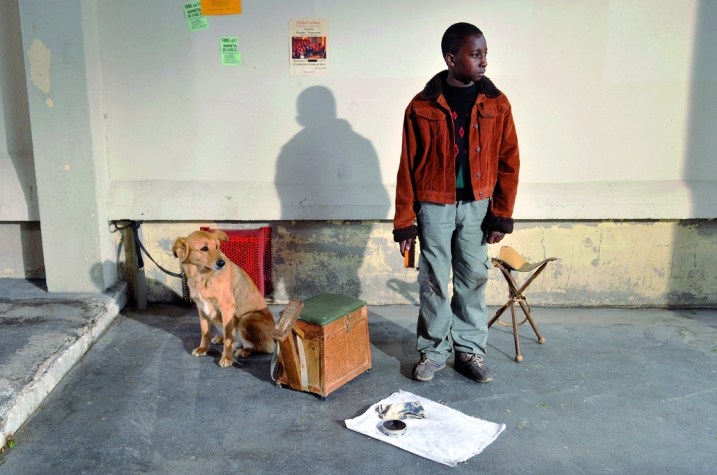 The film looks wonderful (thanks to Kaurismäki’s long-time collaborator Timo Salminen). The look invokes several of my favourite directors. At one point it feels like a Truffaut film – and then up pops Jean-Pierre Léaud. There is also a beautiful shot of a tree in blossom that could be from Ozu. But the strongest connections are to the ‘poetic realist’ films of late 1930s French cinema, signified by the name Arletty and the location. Coincidentally, the BFI have just released a restored version of Le quai des brumes in which Jean Gabin is a soldier hoping to create a new life abroad after he migrates from Le Havre – but he becomes embroiled in a local dispute when he tries to save a young woman. Kaurismäki confirms the links to such films by playing various chansons on the soundtrack. One other reference that has been picked up is to the films noirs of Jean-Pierre Melville in which there are often distinct relationships between the dogged police detective and the romantic anti-hero. In Kaurismäki’s film Marcel has several crucial encounters with Inspector Monet.

Le Havre is the perfect length and if, as a viewer, you allow yourself to be taken into this imagined world you should spend a relaxing and heart-warming 93 mins. I’ve seen the complaint that the boy is too appealing and that the theme is somehow too ‘politically correct’, but I’m impressed by the director’s firm control over his material and I had no problems whatsoever with the film’s approach.

Here’s a trailer with the song ‘Matelot’ by The Renegades.