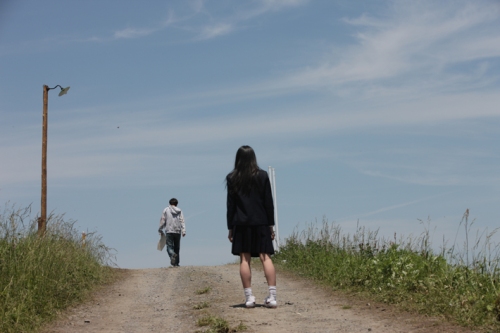 Before the tsunami hit the north-east coast of Honshu in March 2011, writer-director Sono Sion was working on an adaptation of a manga story about a 14 year-old boy. He was able to quickly change the setting of the film’s story to accommodate the aftermath of the tsunami and the Fukushima nuclear disaster. It’s been suggested that it was the topicality of Himizu that prompted the Venice Film Festival to include the film in competition in September 2011 and to give a higher profile to the work of Sono. However, this seems a trifle condescending. Sono is a director who has a controversial image in Japan but also a string of film productions, a genuine fanbase and previous success at film festivals in Asia and worldwide. He began as a poetry performer and avant-garde artist and his films have included Suicide Club (2001) and his most successful title, Love Exposure (2010).

‘Himizu‘ is the name of a Japanese shrew mole, a creature which lives quietly beneath the ground. It’s endemic throughout most of Japan. Sumida Yuichi is a 14 year-old boy whose parents have virtually abandoned him. His father is a drunk who is usually absent but returns occasionally looking for money and often beating up his son. Yuichi’s mother has a lover and has no interest in her son. The family own a house by a boating lake and earn a few yen from hiring out boats to anglers and courting couples. Yuichi responds to a lesson at school and decides that he wants to grow up to be a ‘respectable adult’ who lives a quiet life but does good things for people. However, Keiko, one of the girls in his class (with similarly bad parents), develops a crush on him and constantly irritates him with her enthusiasm for some form of relationship. This is the situation, I assume, in the original manga by Minoru Furuya –a series which ran in Young magazine in 2001-2. The story was unusual in focusing on Yuichi’s psychological state.

Sono’s film utilises the tsunami disaster in several ways. There is a central dream/nightmare sequence which seems to be experienced by at least one other character as well as Yuichi and involves a journey through a devastated landscape of smashed houses, cars etc. Meanwhile, in the real world a group of homeless people from the coast are camping in makeshift homes around the lake – forming a kind of Greek chorus in the narrative, but also a genuine alternative to Yuichi’s absent parents. Finally, of course, the aftermath of the disasters provides a constant topic of conversation and news broadcasts and a psychological environment of resignation, futility, breakdown and other usually negative moods punctuated by desperate attempts to look to the future. You’ll gather from this that Himizu is not a ‘fun’ film. There is a lot of violence in the film, both actual in the form of repeated beatings (including between Yuichi and Keiko) and verbal (parents who say that their children should be dead). The film is perhaps too long. But . . . although I felt I was struggling to watch the film, I still enjoyed it and felt that I got a lot from it. I enjoyed the cinematography and the almost Kurosawa-like obsession with extreme weather.

I’m not surprised that the Venice jury gave the acting prize for new talent to the two leads (Sometani Shota and Nikaido Fumi) who are always worth watching. I don’t want to give too much away about what happens, but I will say that one of the narrative strands includes a yakuza connection which could be just an indication of the way Sono draws on other genre repertoires but more importantly it allows a kind of commentary on parenting (and raises the interesting question of how criminals respond to the chaos created by the aftermath of the tsunami). However, the main genre focus of the film seems to be ‘troubled youth’ and I’d recommend Himizu as a good example of contemporary Japanese cinema in that respect.

Himizu is a Third Window release in the UK which opens in London at the ICA, Prince Charles and Renoir this Friday, June 1st. It will also have screenings in Brighton,  Scotland, Wales and Ireland. See all potential screenings on the Third Window website. The DVD/Blu-Ray release date is August 6th.

Here’s the official trailer (WARNING: it gives away a couple of major plot points)