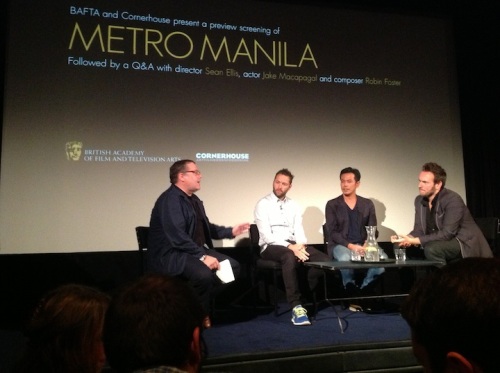 Cinema 2 in Cornerhouse Manchester was the intimate venue for a preview of Metro Manila with support from BAFTA North. The screening attracted an enthusiastic audience including members of the local Filipino community and afterwards Andy Willis, Reader in Film Studies at Salford University, hosted a Q&A with writer-director Sean Ellis, lead actor Jake Macapagal and music composer Robin Foster.

The script for Metro Manila was written by Sean Ellis and Frank E. Flowers in English and then translated into Tagalog more or less as it was shot. The story was developed from an incident witnessed by Ellis during his first visit to Manila. The cast was recruited locally, led by Jake Macapagal, a local theatre actor. Sean Ellis, who has a background first as a photographer and then as an award-winning shorts director (this is his third feature), shot the film himself. Its first appearance was at Sundance in January 2013 where it won the Audience Award. Since then it has played in France and Belgium. It opens in the UK on September 20th and then has a wide release in the Philippines in October. Sean Ellis suggested that his film “slides from world cinema into a genre thriller”. I was troubled by this statement as ‘world cinema’ still seems like a spurious term – more on this below.

The story is universal and Ellis agreed with an audience comment that it could have been set anywhere. The treatment however places it firmly in Manila. Oscar and Mai and their two small children are forced to leave rural Philippines when the price they receive for the rice they have grown drops dramatically. They travel to the capital in the hope of finding work and they are ripped off like every ‘country’ couple who don’t have friends or family to help them. Mai is forced to take a job in a sleazy bar and Oscar eventually finds employment as a security guard when a recruiter realises that this applicant has served time on military service. Everything seems to be going well at this point – but perhaps too well? Against his will, Oscar finds himself in a dangerous situation with little room for manoeuvre. The final third of the film leads us into familiar crime thriller territory, but there is a further plot twist which returns attention to the social question about rural poverty and the terrors of the big city.

I should say straightaway that the film, as a production, is a remarkable achievement. Language was clearly a key issue. Ellis doesn’t speak Tagalog and the kind of language used in commercial Filipino film and television did not seem appropriate (it’s a conventional language used for popular film and television melodramas). Jake Macapagal explained that the cast tried to use the street language of Manila as seemed appropriate in translating the script. I found this fascinating as Ellis explained that the film was edited for the subtitling – in other words, shots would be chosen with start and end points in the edit, not for the flow of the scene, but because of the time needed to screen the subtitles. Of course, for a predominantly English audience the film looked fine. The Filipino audience members said that they could follow both dialogue and titles. The camerawork, performance and music all worked well and the story is gripping all the way through. My only hesitancy was over the narrative resolution (which I won’t spoil). I find the concept of ‘world cinema’ to ‘crime thriller’ problematic. It’s ‘world cinema’ I don’t like and what it implies (a film intended to be seen mainly in international festivals and art cinemas). I would prefer the film to have a consistent style and it was the case that as the thriller narrative developed we lost some of the sense of ‘experiencing’ the city that came over so strongly in the opening scenes.

The response to Metro Manila so far has, not surprisingly, made comparisons with the other two titles involving young British directors making independent features outside the UK in challenging locations. Gareth Evans’ Indonesian-set The Raid (2011) and Gareth Edwards’ Mexico-set Monsters (2010) are both more clearly identifiable as genre pictures. I haven’t seen The Raid but the reports I have read suggest that it is possibly more ‘rooted’ in Indonesian popular culture than Monsters with its American couple in Mexico. It’s sad that Rebelle (War Witch, Canada 2011) another film by a Western/’Northern’ filmmaker, this time set in Africa, hasn’t been released in the UK. Watching it in the same Cornerhouse screen last year as part of the ‘French Connection’ season, it struck me as completely successful and arguably melding what Ellis refers to as ‘world cinema’ and the thriller. I guess the central question about Metro Manila is whether the thriller elements interfere in any way with the sense of authenticity that the realist street approach achieves in the first third of the film.

I confess to relatively little knowledge of Filipino culture and I wish I knew more. In particular, I wish I knew more about the ‘creolisation’ of local culture following Spanish colonialism and then American economic colonialism. In the opening scenes of Metro Manila (see the trailer below) the rice paddies farmed by Oscar and Mia are located in a landscape that reminded me of scenes from Latin-American films – an effect reinforced by the gaudily decorated truck that took them to Manila. In the Q&A we learned that the ‘street version’ of Tagalog includes both Spanish and English words and the film includes several important references to Catholicism that I’d like to know more about in its Filipino setting.

I’ve suggested a couple of possible reservations about the film but I want to recommend the film strongly. I plan to watch it again soon and I’ll be paying more attention to the camerawork and to the narrative structure – I realised during the final sequences that the structure is quite complex with a voiceover and flashbacks that I didn’t fully work out.

Thanks to Rachel Hayward, Andy Willis and his guests and all the Cornerhouse staff who put on this excellent session.

Here’s the French trailer (there isn’t any dialogue in it) which represents the film well:

This entry was posted in Directors, Festivals and Conferences, People and tagged All in the Family, crime thriller, neo-realism, Philippines cinema. Bookmark the permalink.