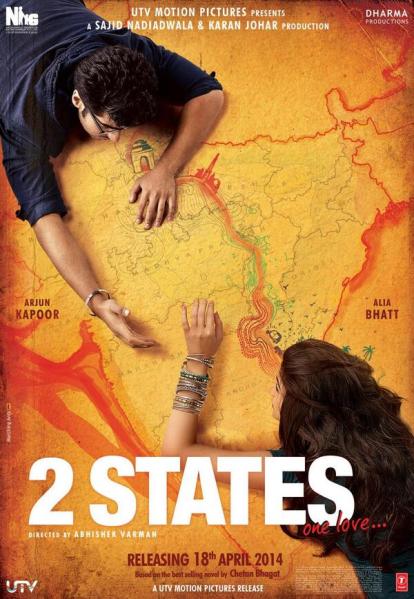 Throughout its long general election campaign India presented itself as ‘the world’s biggest democracy’, consolidating the sense of the Union of India – and that’s how most of us outside the country recognise its identity. But in reality India is not only a physical area the size of 20 European states with three times the population, but also with the same sense of diversity. There are more languages in India than in 20 European states and just as much cultural diversity. 2 States joins a long list of Indian films that use the ‘difference’ between those Indian cultures as a narrative device to add heft to the familiar Hindi romantic melodrama.

The main problem with 2 States is that it is a Karan Johar-produced mainstream film that leaves no convention unused in its assault on its audience. Nevertheless it is interesting as the fourth adaptation of an English language Indian novel by Chetan Bhagat. Two of those films have been hits – the monster hit 3 Idiots (and its Tamil remake Nanban) and the more modest hit of Kai Po Che (the most critically successful). The earlier Hello was deemed a flop. Bhagat is a phenomenon – a graduate of India’s top graduate schools who became a banker but then turned to writing. He has chosen to write in English, the English of the new young professional class rather than the literary English of those writers lauded in the West. His world is not the English public school/Oxbridge of Salman Rushdie, rather the world of the Indian middle-class (not the same as the UK ‘middle-class’) who are at least connected to the mass of the Indian population. 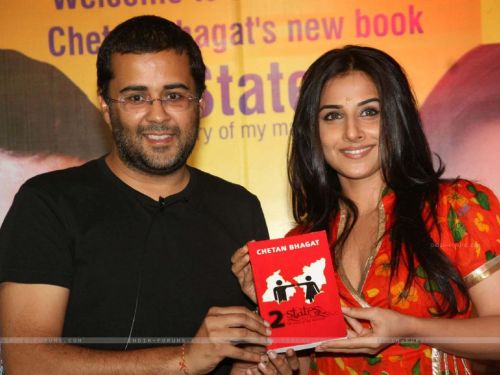 Bollywood star Vidya Balan (from Kerala) at the launch of Chetan Bhagat”s new book 2 STATES at Oberoi Mall, Goregaon in 2009

2 States is the most directly autobiographical of Bhagat’s novels and is presented as a version of Bhagat’s own struggle to marry the woman he loves. The problem is that in India (the book argues) you don’t just have to find someone you love, you have to convince your in-laws and then persuade your parents and your in-laws to get on with each other as well. This is a much greater problem when a Punjabi wants to marry a Tamilian. To be more precise, the problems intensify when the Punjabi boy’s family includes a hard-drinking father estranged from his wife (though still living in the home) and a mother struggling to keep up the lifestyle she thinks the family should have given her husband’s struggling business. Contrast this with the conservative and highly cultured Tamil family of vegetarians and teetotallers whose views on vulgar Punjabis could be seen as condescending. To make matters worse, like many other Punjabi families, this one is based in Delhi – losing roots in a strong community, whereas the Tamilians feel confident in their identity. Elsewhere in this blog we discuss other similar examples of Punjabi-Bengali relationships in Vicky Donor and Bengali-Tamil in Mr and Mrs Iyer. In the different context of a sports film Chak De India! manages to explore a wide range of prejudices against minority Indian cultures.

The abusive terms used (at least as translated in the English subs) are quite interesting. Ananya (Alia Bhatt) when she first meets Krish (Arjun Kapoor) insists that she is a ‘Tamilian’ and bridles at the suggestion she is a ‘Madrasan’. But Krish’s mother uses this term to abuse her. The ever-fascinating Urban Dictionary suggests that the stereotype of the ‘angry black woman’ goes back hundreds of years in India and the ‘angry Madrasan’ is a modern equivalent of this ancient prejudice referring to the ‘demon women’ of the South. The script for 2 States includes the terms Madrasan and Madrasi and also includes representations of the racism of skin colour that is prevalent in India. South Indians are assumed to be darker as Dravidians and North Indian forms of beauty for women assume lighter skin. The irony in 2 States is that Alia Bhatt who is cast as Ananya is light-skinned – which again is worked into the script. Hindi films of the 1970s up to the 1990s sometimes made ‘Madrasis’ into villains. The term was also used to cover all South Indians (it would once have referred to the Madras Presidency in colonial times). The renaming of Chennai has put this prejudicial observation more into focus.

Since the 1990s, Hindi films have travelled to the South for its ‘exotic’ locations, tending to treat Southern India like a tourist destination. 2 States does at least represent Tamil Nadu as a place of work, as well as spectacular settings for romance. I found most of the music for the film to be instantly forgettable but the song which worked for me is ‘Mast Magan’ which includes some of the best images of the Tamil Nadu shoot.

It’s a surprise that this high profile film was assigned to a novice director. As far as I can see Abhishek Varman had only assistant director experience before he worked on the script for 2 States and then directed it. In some ways it doesn’t matter too much that he does not have that much experience. The story is strong and the performances generally very good from all the leading cast members. There is a ‘bracketing’ narrative in which Krish is seemingly talking to a psychiatrist about the problems with his relationships and the suggestion is that at this point he has already written the draft of 2 States as a novel. This narrative trick features in several of Chetan Bhagat’s novels but I’m not sure it serves much purpose in the film. At other times it did feel that the commercial impetus of a Karan Johar production was painfully visible and without the acting talent on view the story would have sagged. Interestingly the next Bhagat adaptation – Revolution 2020 – looks like it is going to be in the hands of Rajkumar Gupta who made the excellent No One Killed Jessica. I hope that the new adaptation turns out more like Kai Po Che.

2 States is now a ‘super hit’ in India with over 100 crore (1 billion) rupees at the Indian box office and $4.5 million overseas