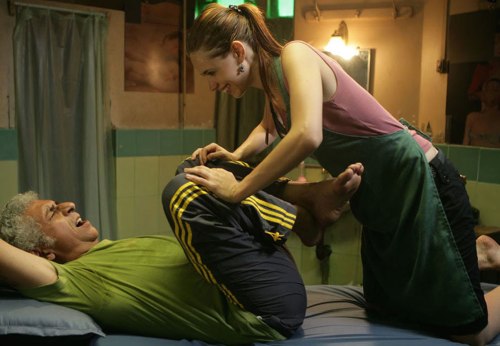 Kalki Koechlin and Naseeruddin Shah in THAT GIRL IN YELLOW BOOTS

That Girl in Yellow Boots seems to me very much a ‘gamechanger’ movie. It isn’t perfect and in the final scenes there was a moment when it didn’t seem to work, but overall I was riveted by this glimpse into an Indian world that I haven’t seen before on screen. I was a little taken aback by some of the very negative reviews, but heartened by the equally positive ones.

Anurag Kashyap has been called the ‘Godfather of Indian Independent Cinema’ and this film, which he directed from a script he co-wrote with his partner Kalki Koechlin (the ‘girl’ of the title), is certainly a good example of what an Indian ‘independent film’ might be. Koechlin is herself an Indian woman born to French parents who were then living in Ootacamund in Tamil Nadu. Educated in a school following the British system and subsequently at Goldsmiths, University of London she speaks French, English, Tamil and now Hindi. She plays the central character of Ruth – a British young woman who has come to India to find her father, ‘Arjun Patel’, who left the family’s home in the UK when she was a baby. He’s written her a letter but he doesn’t seem to want to be found. As a tourist, Ruth is struggling to get a visa to allow her to stay and in the meantime she earns money illegally as a masseuse in Mumbai, offering what she euphemistically describes as ‘handshakes’ for an extra Rs1,000. She appears to have a live-in boyfriend with a coke habit and she has hired a private detective to look for her father.

The narrative of the film is, to be honest, quite sketchy. Ruth seems trapped in a circuit between the visa office, her apartment, the massage parlour and meetings with people who might be able to help her – including trips to Pune where she is pursuing a possible connection in an ashram. At one point a gangster from Karnataka turns up searching for money that her boyfriend owes. Much more important than the story, for me at least, is the presentation of this world. Kashyap has said that he was inspired to become a filmmaker after seeing Bicycle Thieves and he has worked with Michael Winterbottom and has in turn inspired Danny Boyle. His work on Trishna with Winterbottom was after he made this film, but I’m wondering if he’d already seen Winterbottom’s A Mighty Heart (partly shot in Pune) and some of his British films. There are a couple of shots of Koechlin moving through Mumbai streets that reminded me of Gina McKee walking through London’s Soho in Winterbottom’s Wonderland (UK 1999). Winterbottom was in turn influenced by Wong Kar-wai’s films such as Fallen Angels (HK 1996).

Koechlin herself is wonderful, whether she is on her own, trading lines with a ‘parallel cinema‘ great like Naseeruddin Shah, or sparring with one of the much less experienced talents on show. The opening scenes are terrific (Koechlin is reported to have written these herself). If you’ve never been a tourist in India, these scenes give an accurate representation of waiting for Indian bureaucracy at work, but what they really offer is a sense of what it might feel like to be a young woman with white skin who speaks a little Hindi and who is vulnerable in the face of police and visa controls.

As in Kashyap’s other films that I’ve seen, the music is very good. The sources of music material seem to range over several genres and regions. Kashyap also seems to employ the same cinematographer on most of his films – FTII graduate Rajeev Ravi. Extravagant camerawork is common in Bollywood but this is controlled and uses locations very well. It’s amazing to think that the entire film was shot in 13 days.